***While not a conventional recap for BNP as we discuss the impact of each episode, please note there are full spoilers for episode five, “Nobody Beats The Biebs” ***

William: My gawd. While not as surreal as last episode, this episode of Atlanta was just as delightfully weird. I mean, I think we know the one surprising revelation in a character that was shown, but I guess I first want to start with the idea of access. We see it on three levels: Paper Boi and who’s not interested in him, Earn getting entry above his reputation simply because he’s mistaken for someone else, and even Darius for what is acceptable behavior…in a shooting range of all places, as it leads to him being kicked out.

Nicole: I just can’t stop staring at my screen, blinking, and shaking my head. I like what, for me (the not-avid comic reader), feels like the introduction of the idea that we are in a universe like ours, but not ours. But, oh dear god, how sadly similar it is to ours for all those issues of transgression that you mentioned.

William: So in talking about Black Justin Bieber, I don’t know if it was intentional or not, but I thought Bieber was actually just the hype man for the white dude. It wasn’t until he sat down for the interview that it dawned on me that he was actually Bieber in this alternate universe. I thought it was brilliant though to show a Black Celebrity that was problematic as fuck, but not in the potentially violent way (say a Chris Brown) that can do some really dumb shit, then apologize, find Christ, and be loved again within 90 seconds.

Nicole: I definitely think that was an intentional misdirect because I thought the exact same thing. I liked that by making the bad choice parade that is Bieber, Black, the contrast between him and Paper Boi is more focused and we get to see the examination of artist/creator as persona and, more to the point, as a dictated-by-public role which we get to hear articulated by the reporter in the ending sequence of the episode.

What is actually Paper Boi’s disdain for the Bieber character’s assholery and hi-jinks will only ever be seen through the lens of Paper Boi as rapper and, because of the cliff hanger shooting scene in episode one, it’s more succinctly Paper Boi as Gangsta Rapper.

William: I think it’s really interesting seeing Paper Boi thirst for fame, but experience discomfort with infamy. He would probably hate Black Bieber on a normal day because he sees the jig of his celebrity, but because he has something Paper Boi wants (unapologetic admiration and keys to all the doors), it raises his ire even more.

Nicole: And then Paper Boi can’t run Bieber in basketball like he thought he’d be able to and it’s insult to injury. If I can ride that metaphor to death for a second, Paper Boi is at least on some level aware of the doors he can’t gain entry to; first it was radio play, in this episode it’s the reporter (both sexual and professional access), and public adoration. But we can contrast this with Earn who was absolutely unaware of the literal door that he was being excluded from, a door he must gain access to in order to be a legitimate manager (which Paper Boi still asserts he is not). A door that even once he is aware of it, he cannot talk his way into/through and must be vouched for by what appears to be white privilege’s semi-drunken avatar.

[quote_left]But we can contrast this with Earn who was absolutely unaware of the literal door that he was being excluded from[/quote_left]William: In the weirdest way, going back to his date with Vanessa, I feel this kinship to Earn because I feel like he’s learning all the lessons I did except I was probably 19 at the time and he’s considerably older than that. This week’s lesson is, know when something is a gift and when you’ve waded too deep or for too long into the gift pool. As a supplement to that: rarely are there happy endings when White people mistake you for someone else. As soon as Earn relaxed at the bar, there was a voice in my head screaming, pack it in and leave. I’ve exhausted the unintentional good graces of slurry White folks before. I have so many questions though. Did Alonzo really sell her out or was that just White woman tears? Was Alonzo gay as well or was that a slur intended to insult him because it was a gay slur. Was there more than a business relationship? Basically, I want an origin episode on Alonzo, I guess.

Nicole: In my heart of hearts, I want the production team to have live and active social media presences for characters like Alonzo (and Zan and Mystical Bus Dude and even Worst Waitress Ever). But back to Alonzo and Earn. Yeah, once he got those cards, it was time to go. I was proud that he had navigated the conversation well enough for it to get to that point (and the “I ran out of cards” sidestep was okay, too.) 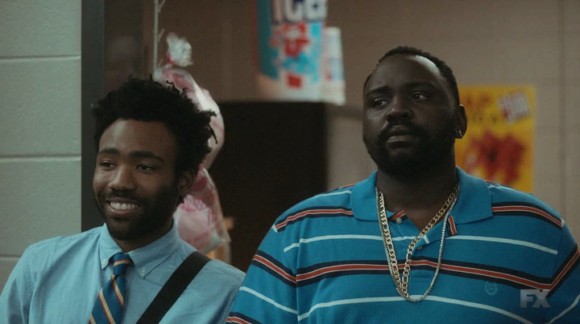 What stood out to me about his exchange with Ms. WWT was that he told her who she was and she still couldn’t/wouldn’t see him, which echoed what Paper Boi said to the reporter earlier in the episode and maybe foreshadowed her “know your role” reply.

[quote_right]Yeah, once he got those cards, it was time to go. I was proud that he had navigated the conversation well enough for it to get to that point[/quote_right]William: Yeah, the Darius storyline was probably framed as the least important but was probably the most relevant as far as social commentary that applies to us non-celebrities. Yes, it’s absolutely ridiculous to me that people have no issue shooting pictures of people and at worst caricatures of ethnic groups they have disdain or no affection towards, but find it reprehensible to shoot at a picture of a dog. The commentary was ridiculously dense for that short section though. 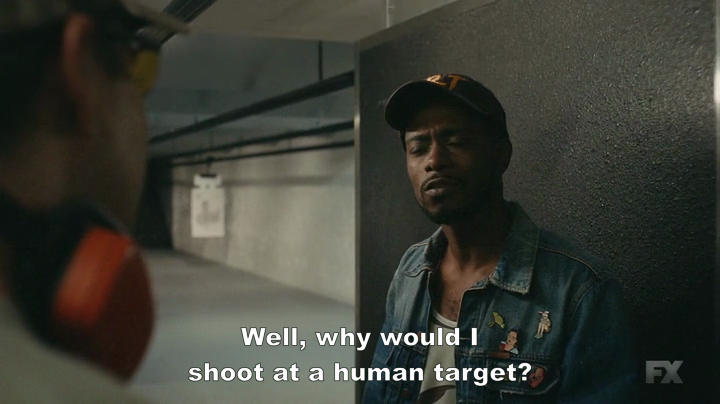 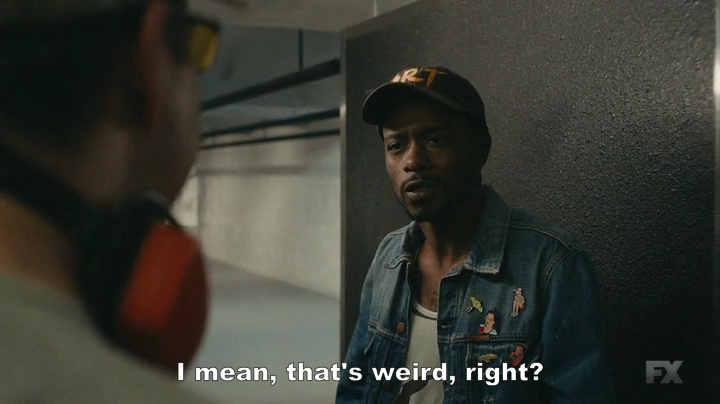 Darius’ experience with dogs in the hood versus the White guys who had a problem with him. The guy saying, “my kid could see you doing that” which brings in the premise of gun culture where you take your kid to the firing range and the fact you have no problem with your kid watching you shoot pictures of people. And of course, the dialogue around White America’s value of animals in relation to human lives. And, a reach, but not crazy is to think about this being Atlanta and the Michael Vick situation. So much was there and I immediately froze up when Darius was escorted out via shotgun.

Nicole: Yes. To all that. I was also transported back to the Harambe debacle and the Cecil incident and all the other instances in which the loss of the life of an animal has caused an outcry unheard of as person after person after person has been turned into a hashtag.

William: I love Darius so much, but I do fear we might venture into Crazy / Prophet territory as I said in the first recap. I don’t need him to be right all the time. I still hope there’s moments like him wanting to measure someone’s tree.

Nicole: Agreed. But I did like the separate adventures we got this week. I’m enjoying the way the dynamic shifts as we see the characters in different constellations. I will say again, where the ladies at? (No, I’m not counting the WWT lady who can’t distinguish one black face from another.)

William: Haha, I was gonna say, you asked for more women speaking and you got a couple of either uninterested or vengeful White women. Sigh…I don’t know. The previews for next week look like Vanessa is out with one of her female friends, so help is on the way. Closing out, what do you want to see from Vanessa to make her likable again after the restaurant fiasco?

Nicole: I’ll be more careful with what I ask for. I don’t even need to like Vanessa; I’m not sure I like Earn and that’s not slowing me up any. More than being likable, I want her to be complex and flawed like all the Black mothers I know. I’d like to see her do more than be an object for Earn (to chase, to woo, to disappoint), but I’m not sure how that can happen with her status as secondary character – or the pieces of the story we’ve been given so far – so I’ll settle for her being three dimensional and dynamic.

Can’t get enough Atlanta? Catch up on previous reviews here.