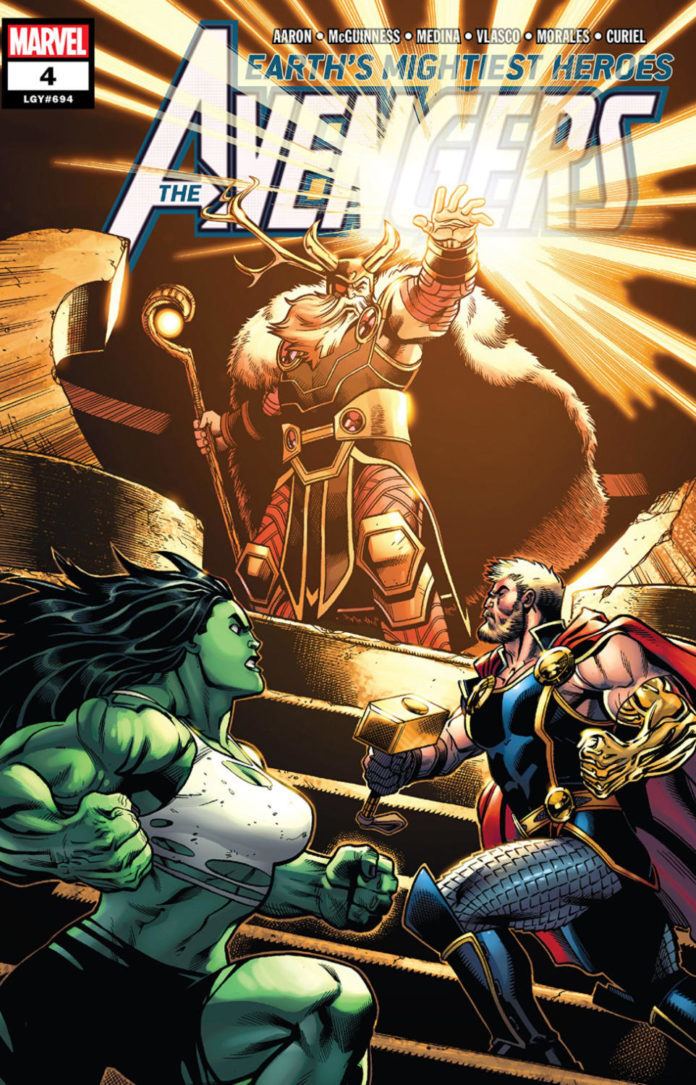 OK, I’m invested. Four issues in and I find myself aching to know what else Jason Aaron and Ed McGuinness have in store for the Earth’s Mightiest Heroes. Avengers #4 continues the struggle of a team of heroes brought together by fate. It’s a classic storyline even without the undercurrent of the heroes’ past iterations throughout the arc.

They’ve split up into smaller groups to try and unravel the mystery of these “Dark Celestials”. Circumstances leave Captain America and Ghost Rider on their own for now. Otherwise, we get She-Hulk and Thor, Iron Man and Doctor Strange, and Black Panther with Captain Marvel. It’s easy to be cynical about the choice to reminisce about the recent sagas of the Marvel Cinematic Universe and also geek out about its future. But when the characters are well written, sometimes distinct from their MCU counterparts and drawn beautifully it makes for a damn good comic for newcomers and veteran readers alike. I found myself fond of the interaction between Carol Danvers and T’Challa. Chadwick Boseman’s portrayal of a newly crowned Black Panther finding himself has been glorious but this book showcases a character I’ve grown accustomed to over the years. Technologically brilliant, royally ruthless, and radiating a confident stoicism that suits the expressionless mask he sports. This is truly a Black Panther that “never freezes”.

She-Hulk adds a flair to this book that I’m feeling. I haven’t been following her solo book this past year (couple years?) but she is somewhere between the out of control, savage Hulk and the lucid Hulk I associate Jennifer Walters with. Her character exudes rage yet seems to speak softly by choice instead of by infantile intelligence. The team up in this book with Thor invokes the reader to think about Thor: Ragnorok although the similarity ends there for the most part.

I touched on it but I can’t stress how beautiful this book is, visually. Ed McGuinness and his creative team have tapped into a style that is heroically colorful and expertly detailed. This is slowly but almost surely growing into my favorite Marvel book. Kudos, team.

9 “Unlikely Make Out Sessions” out of 10