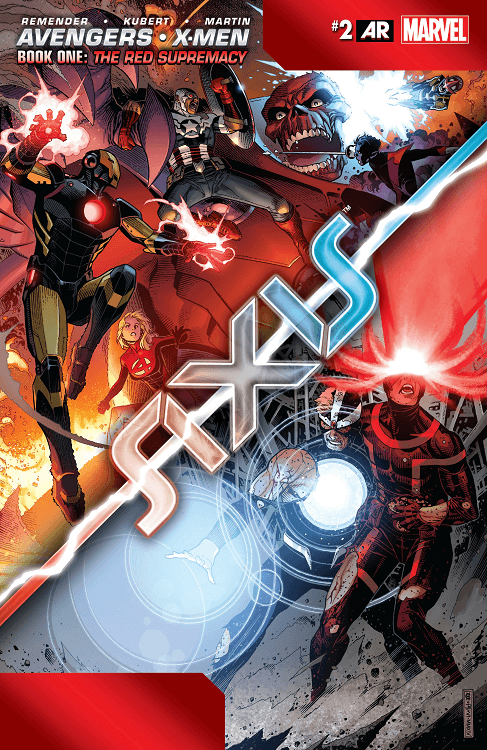 It’s probably not fair, but two issues into AXIS and it already holds my interest more than the last big Marvel crossover (the mention of its name may cause me to no longer wield Mjolnir). As familiar (read: revisited time and again) as Red Skull or Red Onslaught is, the introduction of the StarkTec Sentinels is a nice touch and call back to Fraction’s Invincible Iron Man run. And it’s always fucking Stark isn’t it? Jeez. Avengers vs X-Men, Civil War, however the Infinity Storyline wraps up and this…Stark might want to go ahead and sit the next couple of big conflicts out. At any rate, this issue was well done from the beginning, focusing mostly on Iron Man trying to remember how he engineered the Sentinels (as he had erased any knowledge of them from his mind previously) and how to combat them. It’s dire as hero after hero falls to the might of them, squashing all their plans of attack.

The best interactions are definitely between Magneto and Stark, who share passive-aggressive insults with each other in trying to fight alongside each other. The revelation of Magneto’s role does fit perfectly with Magneto’s own book and I was surprised to see how seamless it flowed, whether that’s to the praise of Remender of Cullen Bunn or both. The pencils are handled well in this too, especially the characterization of Red Onslaught as it would be very easy for him to be more cartoonish then fear inducing.

AXIS is off to a good start with some interesting hero moments, team ups and interactions. The sins of Tony Stark are on full display here (AGAIN), but one imagines there might be some redemption coming down the line.