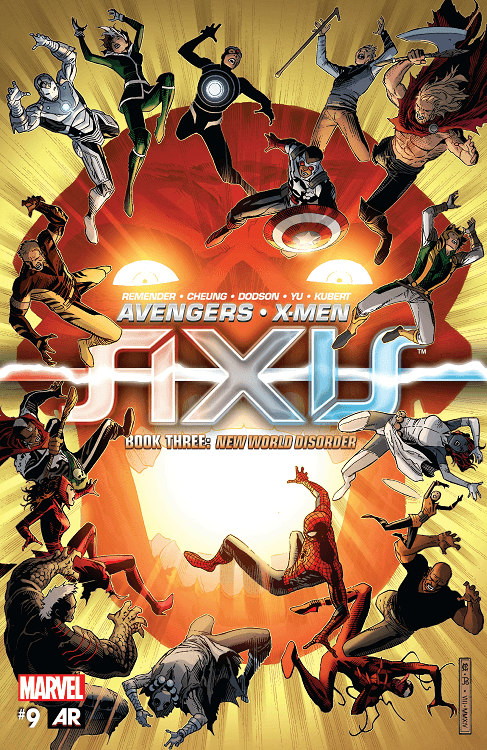 Well, it’s been an interesting few months with this title. Actually, that’s not entirely accurate. It’s been an excruciatingly painful few months reading this book. Marvel has had some questionable success (or lack thereof) with some of their recent crossover events, but there is no question this time around. Axis has been bad. The past couple of issues have been fairly readable which is a huge improvement for this book, but is it too little too late?

To answer that rhetorical question, yes. Yes, it is absolutely too late to save this creative landfill of a book. Now, that’s not to say this issue didn’t have a considerable number of high points. For one thing, Rick Remender got to do some of what he’s good at: heartfelt, internal monologues. But the real rub is the character this particular monologue comes from. However, it ends up being sort of a double edged sword because as interesting as it is, you wish Remender would have offered up more character development like this earlier in the event. In fact, a couple of characters had some good moments, but Axis spent so little time developing anyone involved, there’s nobody here to actually care about. I wasn’t invested enough in anyone to care about the upcoming books Marvel tells us to buy via a pretty overt ad right after the last page. And the White Skull actually made you somewhat sympathetic towards someone who, over the years, has been irredeemably evil. I mean, we’re talking about a guy who grafted Charles Xavier’s brain onto his own to steal his powers (which ranks on the Douchebag Scale just below the #ThankYouNYPD rally). Of course, anyone who reads Black Science or Low knows that sympathetic moments from jerk characters is another trademark Remender strong point. But the award for Biggest Waste of Panel Space goes to Apocalypse. This is one of those villains who shows up and everyone wets themselves. En Sabah Nur is “holy shit” level with Doctor Doom and the Dread Dormammu, but you couldn’t help be feel like he spent this entire event being squandered. And his ultimate fate at the end didn’t do him anymore justice.

Now, the artwork was something to behold, but mainly because the majority of it was done by Jim Cheung. Terry Dodson, Lenil Yu and Adam Kubert did a couple of pages here and there, but Cheung basically took the wheel for the final issue. As always, his pencils were mostly on point, but the only thing that slightly took away from his contributions were the laundry list of inkers. Honestly, it took less people to film The Avengers than it did to ink this book. That many chefs in the recipe will always take something away from the final product but it’s still quality Cheung. In fact, he’s had the best art we’ve seen in the whole event. It was a great effort on Remender’s part to finish this book strong, but when most of the series has sucked, it’s a hard sell.

Bottom Line: This wasn’t a completely terrible issue. It wasn’t even the worst way to end this mentally toxic event. But when you have a 9 issue miniseries that takes 7 issues to get good, who cares? 7 out of 10.