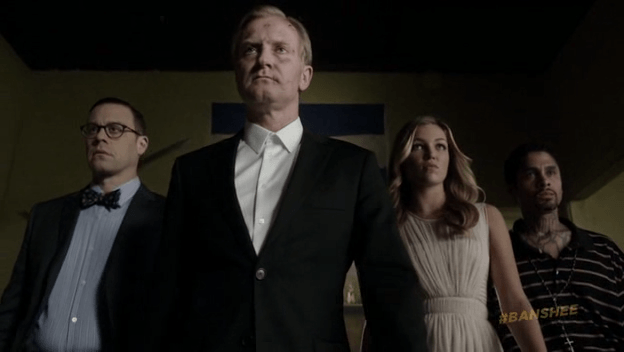 And you say, No Chill City. We’re opening up with Job being interrogated by the hacker that works for The Colonel (or as Oz calls him, “Evil Guile”). Well we say “interrogated,” but really dude is torturing Job by fan-boying over him. My man talking to Job recounting hacking into the NSA to delete some wet works operatives, the time he ripped of banks and gave their money to charities, when Tony Stark admitted he was the ghost writer for all his Stark Tech, and who could forget the time he made the biggest comeback in Street Fighter history at EVO 2k4 when he (playing as Ken under the alias of Daigo) had no health left and blocked all his opponents special attacks.

Job gets thrown back in with Sugar and Carrie mad pissed off. Sugar asked if he was good, and that was the wrong question. “What kinda dumb ass question is that?” Dude started sounding off on all of Carrie’s aliases thinking she sold them out. Carrie gave him the “DON’T YOU PUT THAT EVIL ON ME RICCI BOBBI” face.

Job: You out her fucking the marks — What the fuck else you tell him?
Carrie: Oh? Oh, you think I talk’d? IF I AIN’T SAY SHIT ‘BOUT THEM JEGGINGS YOU GOT FROM CLAIRE’S BACK IN ’03 THEN WHAT MAKES YOU THINK I DONE SAID SHIT NOW?!?
Job: SUCK MY TIT! THEY WERE CHANEL AND YOU KNOW IT!
Sugar: AYO, AYE BODY — Wait, did she say jeggings? I mean — YO, SHUT THE FUCK UP!

Proctor rolls up to the location at Hector Morales’ place. They’re siding with him as he is the rival of the Black Beards. As proof, Proctor hands him a sword as a gift. I’m waching what my Hector thinking, “what he know about that Rurouni Kenshin / Samurai X (Kenshin Himura) sword work?” 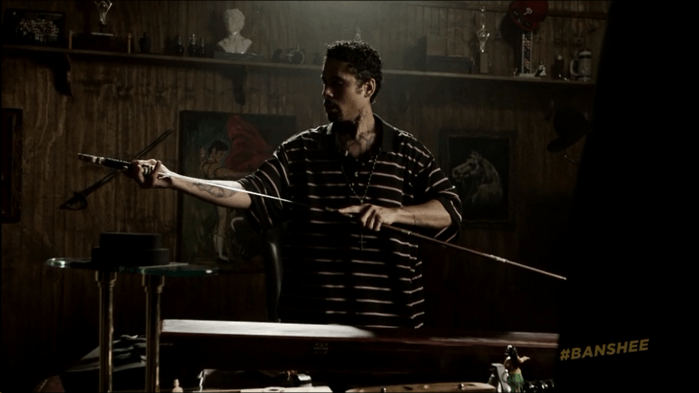 Sun, my man Hector took the steel and started wielding that shit straight up Highander style. He was cooking that steel with the wriiiiiiiiiiiiiiiiiiiiist motion. Hector swinging that blade around talking about how the Ming dynasty made great swords but you only know a sword’s true worth in battle. Lemme find out Hector Morales got the tat’s on his eyebrows and cultured as fuck like he was a fan of The Romance of The Three Kingdom series and played the Dynasty Warriors video game from way back.

Back in Banshee, Bunker (aka American History X) tried to talk some sense into his brother ’bout disbanding the Nazi movement, which fell on deaf ears. He then runs into his old Nazi crew talking that shit in the parking lot. Bunker did not let the uniform stop him from popping the trunk on they ass. He yanked dude up like he was trying to choke out the problematic parts of his past he been carrying. Brock was talking to him back in the station, sayin’ “Lord knows I be wanting to choke out a Nazi from time to time but you can’t be wylin’ like that in broad daylight, man”. Brunker then proceeds to give us hands down the most powerful scene we seen this season.

MUH FUCKA YOU BETTER ACT! Brock looked dude dead in the face and told him

“That isn’t anger that you’re feeling. That’s the shame and the guilt. And trust me, we all feel that. All of us. And that is what makes you better than them. If you didn’t feel that, that’s when I’d start to worry.”

Cut to Colonel Evil Guile pacing in his office and Hood walking in wanting to speak to him.

Hood’s cop guise is blown away and he tells Evil Guile he’ll get his money after Hood has proof his friends are good. Hood sees ayebody is looking like they just got done watching Fox News for their duration there. Hood goes back to sugar’s bar, but he ain’t getting the money. Oh no, Hood loading up mad guns reminiscing back to when he was being starved out and enlisted into a clandestine wet works branch in his youth. Hood having flashbacks while personally writing “To Evil Guile” on every bullet before placing them in the mags. Gordon walks in, looks at Hood, walks out, then walks back in brandishing his own version of the Rust Cohle tool box. My man unwraps a fucking sniper rifle. Gordon is not fucking around, he got the scope from Perfect Dark and setting his shit up like he bringing back the First Person Shooter days of Goldeneye.

Meanwhile in Philly, Proctor and Hector running through the Black Beards. Dude, Clay Burton literally strolled in there dressed like an accountant and looked around like, “I’m not suspicious to y’all? No? Hmf… Guess I’ll shoot first. Proctor dropping cats around him and almost get snuck up by dude with an Uzi till Hector shows up for the save.

This dude Hector came out the shadows rocking Chuck Taylor’s WITH HIS GUN TUCKED! THIS DUDE IS FUCKING HILARIOUS! He killed dude and did the Rick Flair “Woooo” cause the sword was so damn good. You can tell he is the guy that plays First Person Shooter video games but never uses guns. He the guy on the team that just goes in for knife kills.

[divider type=”space_thin”]
They blew Frazier’s spot. Literally. Frazier comes to with his whole squad around him dead and Proctor in his face, talkin bout “What up. I know you’re blind so lemme read the room for you. I’m here smokin’ on ya cigar. Rebecca, my niece is here. My boy Clay, you remember him Clay. Oh and Hector here to with this new sword I got him. I saw him kill like thirty guys on your pay roll with that. He does this lil Rick Flair “woooooooo” each time, it’s hilarious. Ehhhh, guess you had to see it. Alright, Hector is dancing now cause he about to kill you. He’s doing the — is that the Nae Nae? I believe so… okay’s now he’s doing the whip dance with a smooth transition into a yeet —OOOOOOOHHHH DAAAYUM! He just sliced your neck… you dead.

Hood rolls up to the military base in the truck from the album cover of Everlast’s “White Ford Sings The Blues,” he gets to the gate and GORDON “THE WILD MAN OF BARIO” HOPEWELL proceeds to lose all of his chill. He hops out the back with the same gun Cable used for his hyper combo in Marvel vs Capcom 2 and starts merking cats, then proceeds to turn the radio to his favorite station, 99.3 Murda Music FM as he brings out his sniper rifle.

Look at his face in the last gif! LOOK AT THAT MAN’S FACE AS HE SAVES HOOD’S LIVE! IT’S TOO EASY! THE REAL LIFE FIRST PERSON SHOOTER KING IS HERE!! Inside the gang manages to escape (via breaking Sugar’s thumb to get out the zip ties) and split up, Carrie runs into Evil Guile and proceeds to give us a fucking UFC match like she is coming for Ronda Rousey’s title. She takes on Evil Guile as he shoots at her for a take down. Carrie then proceed’s to tell this dude, “you fight better than your fuck,” this is after having been beaten with fucking batons and shit, too. She fucking got’em into a triangle choke, then proceeded to mount him and chok’em out with all the work she put into thigh and leg day at the gym. She goes for a knife and got snuck up on from behind by Evil Guile. Outside, Job improvises using his belt as against Evil Guile’s second in command (after he did the most nonchalant grenade toss of all time toward Sugar and Job) manages to take him to the ground for a kill.

Evil Guile comes around the corner holding the burner to Carrie’s head. Hood seeing visions of what happened to Siobhan so he ain’t dropping the piece this time. It’s a stand off up until Gordon “More Guns Than Cable” Hopewell shows up outta nowhere with the 19/19 hawk eye vision.

This dude out here bending the bullet like Wanted and shit. He shot dude’s fucking fingers off. Then, to add insult to injury, Carrie guts him from the side. The teamwork too nice to be handled right now, man. Hood looking at Gordon like, “you the real MVP” but my man Gordon couldn’t even walk over to accept the MVP award. He got tagged on his side and is bleeding out, dying in Carrie’s arms. The man was out here bending bullets for impossible shots and is ascending to Valhalla now? Come on, man. While everyone is mourning Gordon, fanboy hits Job with a silencer and a sleeper hold before stealing him away. Hood becomes aware way too late as his best friend gets carried away in front of him.

Hood meets up with Brock at the police station with zero answers for him on how Gordon died or why the military base looks like Day Z now. All he tells Brock is that he is handing in his badge for realsies this time. He gets back home and tells Sugar he has no idea how to even go about finding Job. He’s about to call it a day and sees Proctor on his stairs.

Proctor: You left me to die.
Hood: Man please, stop acting like you mad about that.
Proctor: AAAAAHHHHH, YOU GOT ME! I woulda did the same thing to you, man.
Hood: Ha-ha-hah- I know you would, you ass! heh heh–*holding sides while laughing* wheeeeeew… I needed that. Oh, by the way… I’m not the sheriff anymore so *Kanye shrug*

This has been an amazing season this time around. We are definitely getting a season 4, which is great, but we also had to give the Rue / District 11 Salute to many great characters like Siobhan, Chayton, and now we gotta say goodbye to one of the best sniper’s in the game, Gordon “More Metal On Me Than Metal Gear Solid” Hopewell