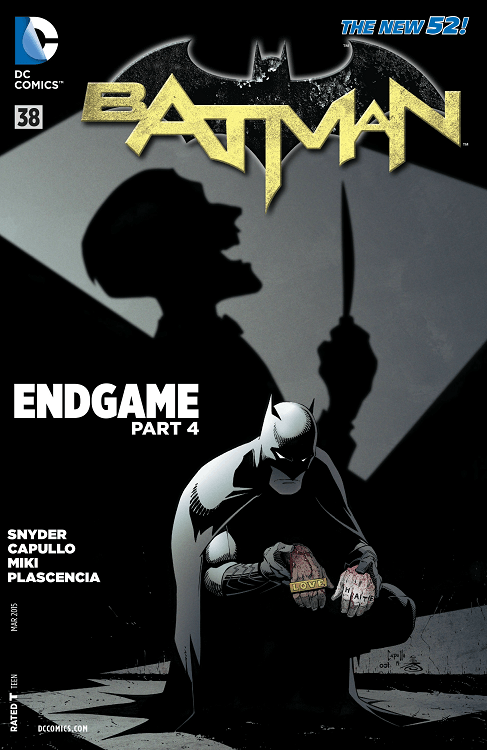 Scott Snyder wants to go out on top so badly. And you know what? He just might. Following up his nigh-incomparable Zero Year run with Endgame (or The Last Joker Story, as I like to call it), the dynamic duo of Snyder and Greg Capullo want you fully immersed in the world of Gotham in a way you haven’t experienced before.

As Endgame continues, Batman explores a Gotham City in the hold of Joker’s absolute turmoil in search of a cure for his old foe’s latest virus. But with the infected citizens growing more violent by the minute, the Dark Knight has his work cut out for him. This story arc has run the gamut in “genres that work well for Batman.” Endgame has gone from superhero slugfest to outbreak thriller to procedural cop drama in four issues. For an issue that didn’t see much of the Clown Prince of Crime, you definitely felt trapped in this quarantine zone of a city with him (and a maybe/maybe not revelation that, even as I’m writing this, I STILL have no idea how to process appropriately).

As you traverse the rooftops with Batman through the Joker’s outbreak wonderland, despite you getting the full view of Gotham, the city’s current predicament suddenly creates a claustrophobic kind of terror where it feels like the Bat’s nemesis could be around any corner, ready to cause more trouble at a moment’s notice. Snyder does a lot effectively with this the most notable in this issue in particular is how he seamlessly weaves Gotham lore into long running mythos, making much of Batman’s internal narrative almost like a personal love letter to the city itself. If artists have some anime-like, transformation the undergo when they step their skills up, Greg Capullo isn’t far from it.

Each panel feels appropriately creepy and atmospheric, pulling you further into Batman’s nightmare scenario….equal parts Seven and 28 Days Later. And I must always commend Capullo on folding such a diverse, rich color palette into stories that would be just as effective in the degrees of greyscale I could imagine many artists would probably use.

Bottom Line: Snyder and Capullo are finishing strong, still pumping out one of the best comic books in the industry right now. 9 out of 10