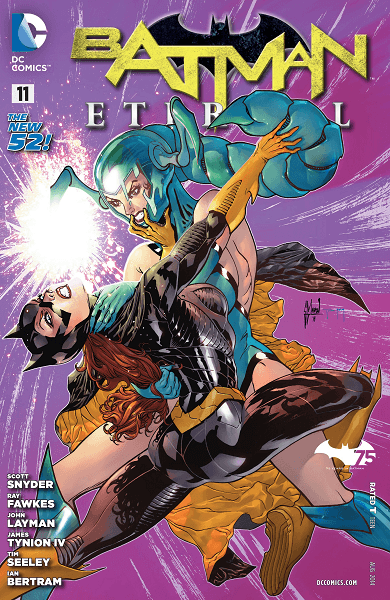 See, THESE are the kind of issues I look forward to from Batman Eternal. Last week, we saw the downside to a weekly book with perpetually rotating visual talent. I don’t know if the term “chicken scratch” works as well to describe pencils as it does for handwriting, but that’s the only word I can come up with to describe last week’s art. Chicken scratch. However, as the baton is passed, things have started looking up again in Issue 11.

This week, we take another break from focusing on the Dark Knight shine the spotlight mainly on the ladies of the Bat Family…Batgirl in particular. With her father being framed for murder, it’s put her in a bad mood to say the least. So, now she’s headed out to Brazil to chase down a lead with which she can hopefully nail Carmine Falcone. This leads her to a showdown with a local baddie, Scorpiana. This delivers some satisfying action with a a twist of the bizarre more reminiscent of Batman Inc. than the trip to Hong Kong a couple of issues ago. Meanwhile in Gotham, Stephanie Brown is in detective mode, looking for insight into her father’s past and maybe the key to spoiling (See what I did there?) his plans. Despite feeling somewhat telegraphed and maybe a little late coming, this Cluemaster origin story turns out to be a pretty good read considering he’s sort of a C-lister at best.

However, the really strong material highlighting Alfred’s interaction with his estranged daughter, Julia Pennyworth, feels gone just a little too soon. Also, there’s a couple of pages worth of a look at Catwoman’s daddy issues that double as a look at her checkered relationship with Batman. There’s a lot different viewpoints worth of material covered in one book but Tim Seely does such a wonderful job of balancing it all, it’s almost unnoticeable. Ian Bertram’s artwork doesn’t just take center stage this week. It shoves all other aspects of the book out of the way and hogs center stage like Molly Shannon in Superstar. The eyes look a little funny at times here and there (not to mention Red Hood’s mask having a mouth…I don’t even have a good joke for that), but his indie style of rendering characters, somewhat reminiscent of Frank Quitely is a refreshing and interesting approach to a title as mainstream as a Batman book.

Bottom Line: Despite a couple of forgivable facial oddities, the change in art styles gave this book a very welcome change from last week’s shenanigans. 8 out of 10.