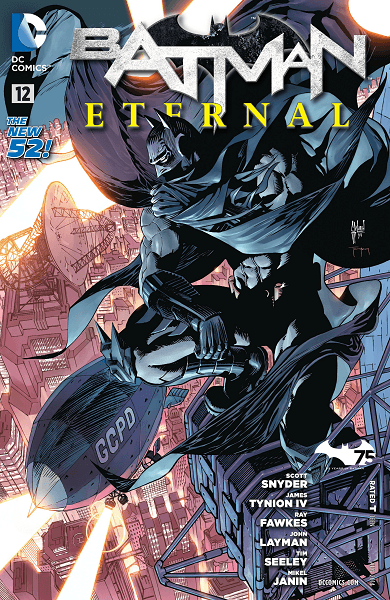 So, last week’s issue of Batman Eternal, despite getting a glowing review from me (the one that matters), was met with mixed feedback from people that weren’t necessarily ready for indie art in a mainstream book. Not quite a win but not a loss either. We’ll just call that “the misunderstood issue.” This week trades the offbeat vibe for a more standard vibe.

James Tynion IV takes the helm for scripting this week as things pick up speed once again in the main plotlines. As the trial of Jim Gordon begins, it’s clearer than ever that the odds are stacked against him as the prosecution wastes no time in sinking him faster than the sales number for Kanye’s last album. Watching a city’s attempts to bury someone who could be considered its greatest hero (without a mask) is probably the most compelling material in the issue. Also, we get a few scenes of Harper Row ruffling Red Robin’s feathers.

The MVP character, though, has to be our new kid on the GCPD block, Jason Bard. Finally fed up with Commissioner Forbes’ “fuck’em” policy and actually catching bad guys, he’s putting a plan into motion to get the city back from Carmine Falcone’s war with the Penguin. It’s a great insight into why Gordon hand picked him in the first place. The guy comes across as a younger version of the embattled former commissioner himself when he snaps into action. There are a small handful of panels devoted to Batgirl, Red Hood and Alfred to signify the fractured pieces of their narratives will be intersecting soon. When it’s at its best, this book does a great job of managing a lot of POVs at once without the book feeling too cluttered to keep up with. Mikel Janin’s artwork is definitely on point this time around. The minor face off between Batgirl and Jason Todd looks fantastic and, as short lived as it is, feels like as kinetic as this slightly intense family quarrel should. And he adds so much gravitas to the opening statements of Gordon’s trial, you feel like you’re in the defendant’s chair right alongside him.

Bottom Line: As the main story finally gets going again, this book goes back to being one of DC’s strongest offerings. 8.5 out of 10