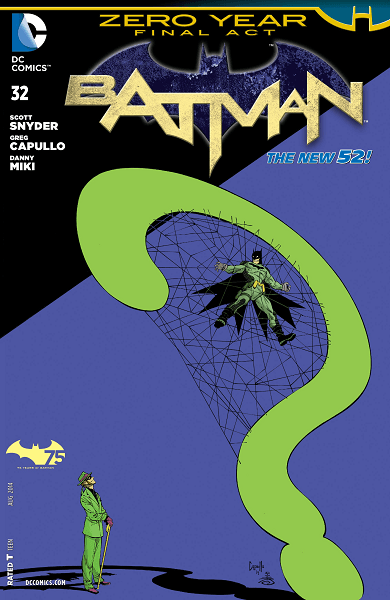 Scott Snyder and Greg Capullo have proven to be a dynamic duo in their own right. Over the past year, they have pulled out all the stops turning Batman’s origin on its ear. Issue #32 is an incredible penultimate installment to this final act of the Zero Year series that has been fawned over by a few of us here at Black Nerd Problems.

This issue sees Batman, Jim Gordon and Lucius Fox making their big play at ending the Riddler’s reign in Gotham once and for all before the last step in his master plan can be enacted. Watching this heroic trio work in unison is the stuff of legend. Lucius is unquestionably on par with what new readers and mainstream fans might have become accustomed to from Morgan Freeman in the Dark Knight trilogy. Above all, this book once again highlights the thing we truly love about Zero Year Batman.

When we’ve become so used to a hero that never sweats or flinches in the face of danger, Snyder’s quick thinking hero visibly struggles with the obstacles set in front of him. Where we would usually get a ridiculously prepared hero who has a contingency for every possible pitfall, this is a Batman who thinks on his feet and, at times, has no idea what’s going to happen from one leap the window to the next. Greg Capullo’s artwork is beautiful and such a key component of what makes this book work so well. His sense of perspective makes certainly makes him a frontrunner for “best in the business.” His world is so vivid and fully immersible, you practically feel every bullet whizzing by your face as Bats does. And the last page might be one of the most gorgeous of Capullo’s run.

Bottom Line: You’ll be hard pressed to find a mainstream comic as good as this. The ONLY thing we really have to complain about with this title is that it’s not getting to the long awaited finale fast enough. And honestly, that’s just because WE’RE impatient fanboys just like everyone else. 9.5 out of 10