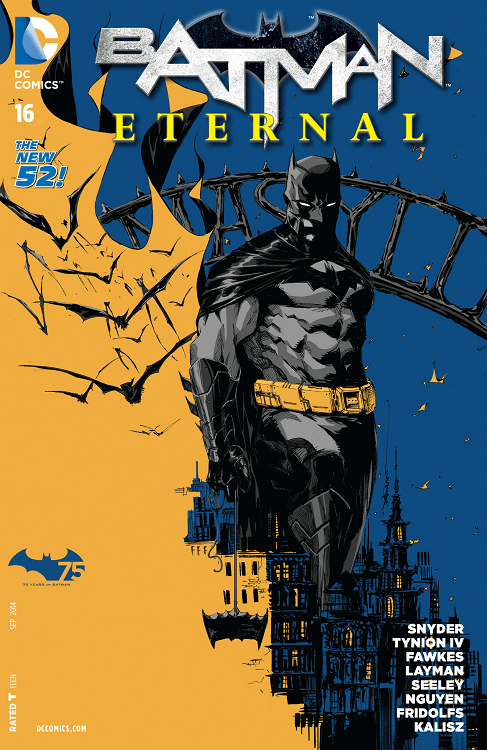 Batman Eternal, while its been nowhere near as effective as Scott Snyder’s Zero Year tale in Batman, is still the second best Bat-title in rotation. This book, admittedly has its problems from time to time, but it still works better than 95% of weekly titles I’ve read in my time. This is largely attributed to Snyder’s overall layout for where the main narrative is leading.

Ray Fawkes has taken the helm once again for scripting Issue 16. This week continues primarily with the Batwing/Spectre team up as the unlikely duo investigates the things going bump in the night over at Arkham Asylum, which has completely devolved into Hotel TurnDownForWhat for all things supernatural. Let me just say…this is one of the creepiest moments I’ve personally ever read in a Bat-book. It’s also the most effective plotline happening in this chapter of the series. It’s nice that the supernatural element of the New 52 is working out so well and it definitely looks good in any book Dustin Nguyen is illustrating.

Meanwhile, we see a bit more of Red Robin and his sparring partner/not-girlfriend Harper Row bickering while they follow up a lead on….something. I keep saying this every week, but they need to just hook up and get it out of the way. I don’t know how I feel about this superhero version of Moonlighting. And I’m sure the small glimpse we’re given of Vicki Vale and Jason Bard is supposed to foreshadow a coming plotline but it comes across somewhat repetitive from what we saw last week. Nguyen’s pencils are top notch, very well-suited for such a creepy atmosphere as the one Fawkes sets up for issues to come. There are some panels that are more haunting than any recent horror movie in theaters right now.

Bottom Line: Definitely a dope, less cluttered effort from Fawkes and Nguyen makes this a strong run of a mostly well-managed series. 8 out of 10