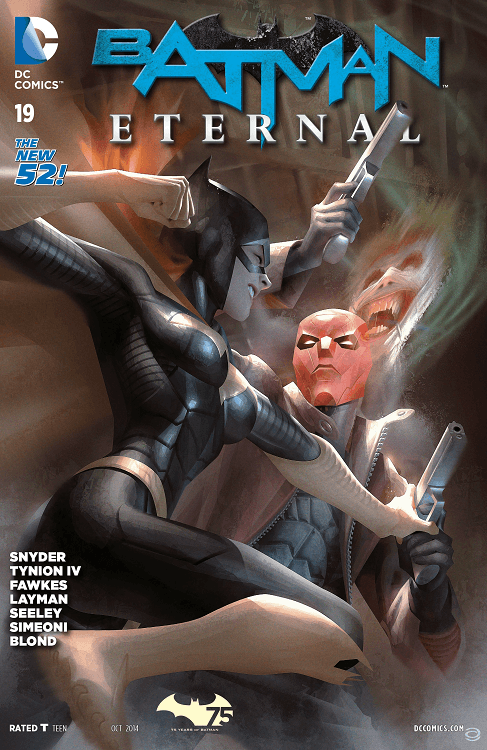 Okay, so maybe I was rough on Batman Eternal’s artwork last week, but I’m telling you….DC earned every word. Scott Snyder’s work on Batman #34 puts it into clear focus that no matter how well done your script is, the art is what truly creates the mood and atmosphere in a Batman book. But there is room for redemption this week.

Tim Seeley throws a LOT of material in our lap this week. Batman and Jason Bard have a villain join forces with Killer Croc while in pursuit of a dangerous sewer killer. As far as standard villain team-ups go, it’s not bad. Meanwhile, Blackgate prison is understaffed and overcrowded which is just asking for the shit to hit the fan. So, it’s up to the warden and Jim Gordon to keep this powder keg from reaching fever pitch. (Another) Meanwhile, a brainwashed Batgirl throws down with Red Hood as Batwoman goes after Dr. Falsario. Seeley’s got a lot to go back and forth with in less than 30 pages, but he manages everything surprisingly well. Hell, he even manages to squeeze some more of Booth and Bones….I mean Beckett and Castle….I mean Red Robin and Harper Row.

These plots in particular are getting to a point where you feel like they’re going to meet in the middle somewhere soon to show us Scott Snyder’s grand design, teased in the first issue. Emanuel Simeoni’s artwork is mostly a drastic improvement from last week’s awkward aesthetic. My only standing complaint is THE MOUTH ON RED HOOD’S COSTUME!!!! It’s so goddamned distracting. The badass of the Bat-family shouldn’t look like he made a wish and turned into to Michael Jackson’s robot at the end of Moonwalker. The rest of the visuals look so dynamic and stylized that I can’t really subtract many points about the mask…but it needs to stop. Seriously, DC. I’m going to hold a grudge about this shit.

Bottom Line: A well balanced juggling of plotlines plus several improvements in the art department makes for a book mainly returned to form. But take the mouth off of Jason Todd’s mask. Really. Please. Pretty please. 8 out of 10.