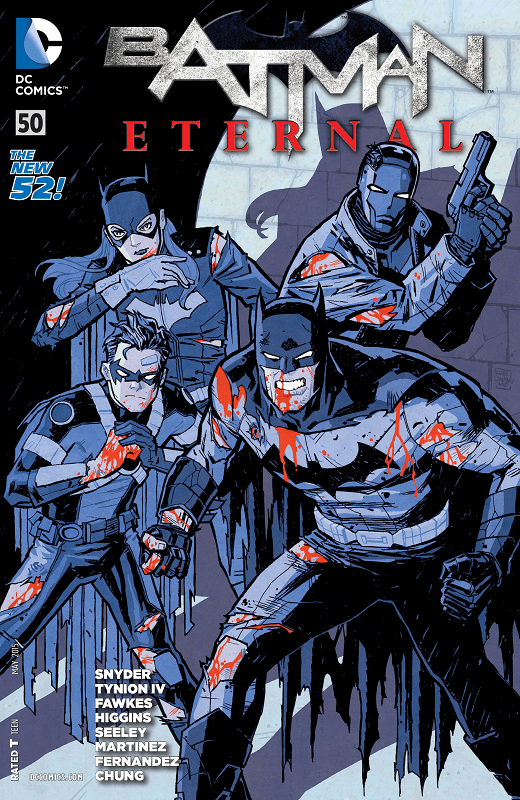 Only a couple more weeks of Batman Eternal left to go and thus far, the book seems to be trying to end on a high note. After a year of shooting in the dark (which isn’t usually a problem for Batman) trying to find the villain who’s been trolling him non stop, the Dark Knight is finally hot on their trail. But can the creative team keep the momentum going?

This week, the Bat-family has been holding their own against some of the baddest Gotham has to offer. But now that daddy’s home, they have the edge they need to push back the tide. And when Batman wants it done right, he does it himself. However, the endless threats are starting to take their toll on the Detective and it’s finally starting to show. It took long enough, but this book really runs like a well oiled engine. Of course, the fact that it’s James Tynion IV’s turn on scripting this week doesn’t hurt either. It runs on a nice, even pace and still manages to give every character, no matter, how much airtime they get, their own pitch perfect voice to add to the book’s flavor. Tynion has a unique approach to Batman that’s unmistakable in this issue as he tears through the city like a hurricane in black cleaning house once and for all. The only real drawback is that Batman’s reappearance in Gotham kinda downgraded the rest of the family, each of which were doing a pretty good job of proving themselves on their own.

So, once again, the “Goddamned Batman Problem” rears its ugly head. On the other hand, what we’re given is so good, we can over look it this time. Alvaro Martinez’s pencils look absolutely sublime. With so much going on, it’s quite the accomplishment for all of the action beats to be so crisp and easy to follow here. And even war torn and with no sleep, Batman looks as deadly as ever.

Bottom Line: If the final two issues are this good, this is going to end up being the best final run DC has had in a while. 8.5 out of 10.