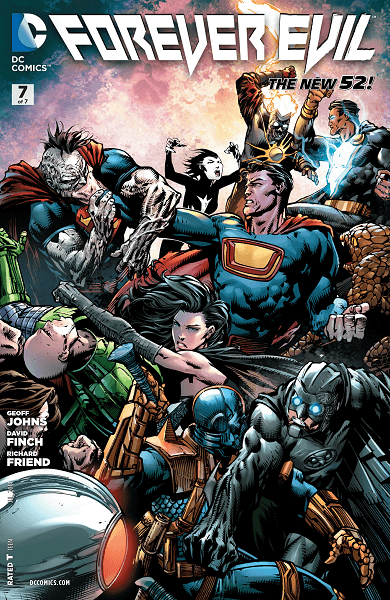 For once, a comic book cover accurately portrays what is going on in the comic book. If you look at the cover, you can tell, there’s A LOT going on. Actually too much. Here is the checklist that Johns had to handle for this last issue:

As equipped as Johns is, this book just buckles under its own weight, cramming some revelations, skimming over others and descending into silliness at some points. What is interesting (and questionable) is the lens that the last book adapts, which makes this Lex Luthor’s story. Actually, its Lex Luthor’s most heroic moment as he seems to be the catalyst for fixing EVERYTHING in this issue, including his abandonment of being a shrewd business man by the end with the introduction of Ted Kord (bout time!). It all seems a little overdone in creating Luthor in this new light, but I understand it given his role in the new Justice League. The most clever part of Luthor’s personal narrative was his -uniting with Alexander Luthor and his ultimate defeat of him.

While there are some enjoyable parts in this issue, there is some outright silliness, especially with the Superwoman revelation and her overall role in this series. It just seems that there was more opportunity with the character that didn’t get realized more than the others members of the Syndicate without her becoming the melodramatic component of this story.

When cobbled altogether, its hard to say that the Trinity War and Forever Evil books have been “successful”, though they did do their best to play with the Justice League narrative a bit in the New 52. There were stronger issues of Forever Evil than this last installment, but it does do well to set a new status quo for the Justice League moving forward.