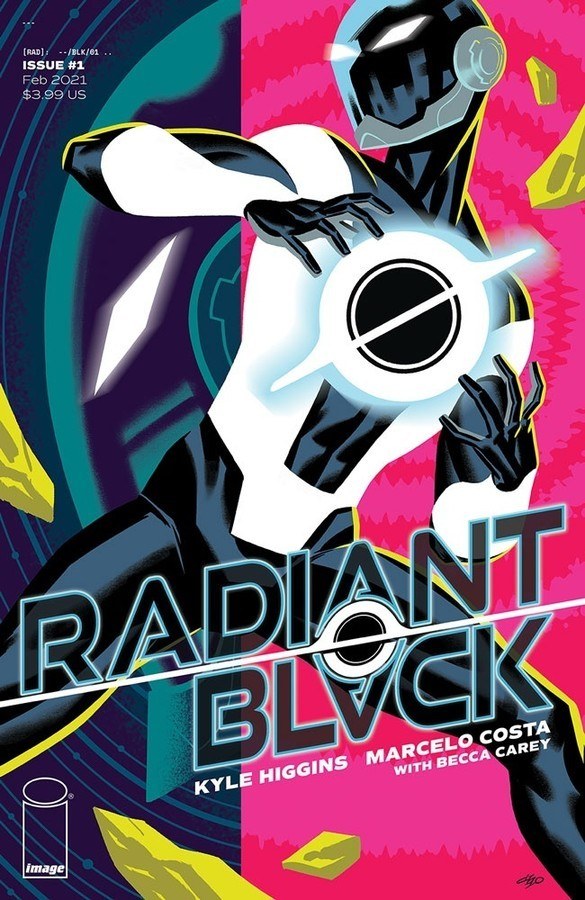 It’s been a minute since we’ve had a straight up superhero comic from Image. It certainly doesn’t help that the most famous one under their banner, Invincible (a series I recommended at the start of the pandemic) is a fan favorite and getting an animated series with a star studded cast. There is a pedigree and some expectations that when the word superhero is evoked, that it’s hard not to instantly make comparisons to the saturated market. Radiant Black‘s first foray into its own universe is a visually stunning start, although your mileage is going to vary whether or not it has narrative standing as well.

Our protagonist, Nathan Burnett, is your typical, relatable white man, working as a ride-share driver, trying to make it as a writer in Los Angeles, and in an comical amount of credit card. And when his ambitions slowly/quickly crumble around him, he finds himself moving back home to his parents in Lockport, Illinois. It is here he meets up with a childhood friend and some sort of black hole adjacent thing that gives him a super suit and an array of his nebulously defined powers. That’s about as high level as an overview I can give without spoilers, so let’s look at the elements in play.

Our protagonist, Nathan Burnett, being both a white dude and a writer doesn’t really do much for me personally. He’s likeable enough of as a character, but he’s also not particularly interesting. Right now, his defining features are the fact that as his life has reached a low point, he found something supernatural that makes me “unique” for a definition of unique. Higgins pacing is sensible and straight forward. The dialog is believable, even though it does get verbose at times. Some of the interactions in the later half of the issue get a little eye-roll-y. It’s fine. There are clear plot hooks that are meant to engage us, but ultimately my end reaction was a flat OK.

Now that said, Costa’s artwork may just be worth the price of admission. The bold character design and color works to the series’ advantage and visually, the book is full of wonderfully playful shots that live up to a name like Radiant Black. And Carey’s lettering matches the expected superhero energy.

But Radiant Black does not immediately draw me into its world. There are so many other superhero stories out there that are doing things that more interesting to me as a reader, that I wouldn’t necessarily prioritize this one in particular. It’s fine, but in an era where there are truly spectacular works, I am indeed looking for something… well, radiant.