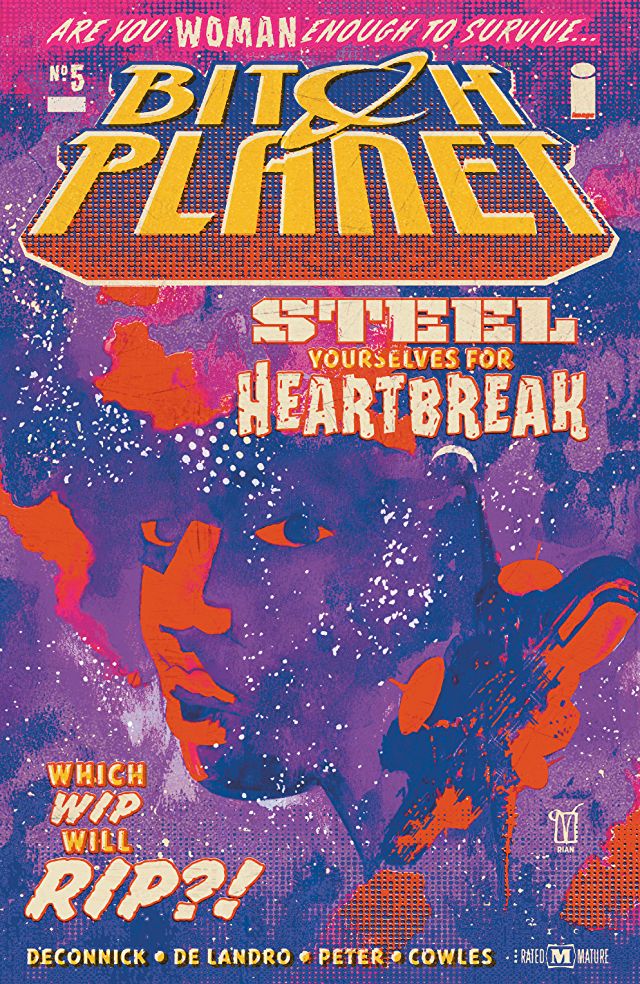 For real. There’s a certain joy in my heart going to my comic book store and picking up a pull list the week Bitch Planet arrives because 1) I love this comic, 2) I’ve come to embrace the fanbase and have found new connections with several female fans (#SayYesToSisterHood), and lastly 3) this book makes me angry.

Yes, angry. You read that right. And sad. And lost. And leaves me in awe… and everything in between. This comic has a narrative that makes me feel certain ways all the way from Monday to Sunday and the week after that. Jumping right into issue number five, we see our crew with their team assembled ready and eager to go out kick some asses, take some names and wreck some serious ish up.

What did I love about this issue? For one, the delightful introduction to more inmates. The learning of the names and faces of more women (and their “crimes”) who more or less call the prison their home. This makeshift little family is becoming a real thing and we can start to put faces to names and these bodies can be more than just that to us readers.

I  love seeing the women work together. As a team. As a unit. In some kind of formation towards a shared goal. Seeing fictional women do this stirs something in me — because yo, I’m so tired of the “you have to be better than her” type of mentality girls and women are sold. Seeing our team of women — mostly marginalized women, women with melanin, women that society have given up on — march out with confidence inspires and leaving a great image etched in my mind.

Also, the details. The freaking details in every issue. In this issue from the items on the screen from the news channel (you saw all that right?) within the first few pages to the essays and back cover.

What did I not love about this issue?

(Avoiding the elephant in the room here and not spoiling the ending)  I see where I may be biased here, but don’t we all want to see more of the inmates? That’s a given. I’m struggling with seeing the balance of what happens on Bitch Planet and, of course, what happens off Bitch Planet. That and knowing that we have to see glimpses of the men and the society that pull the strings here for the women we root for and the odds that we hope to fall that are stacked up against them. I understand that in order for this story to exist and for it to continue, the conflict is needed and both parties are needed as well. At first I felt that I had a bit too many panels of characters I didn’t necessarily care about to sift through and wanted to get back to the ladies, and boy, did I want to take that back after I thought it.

What bothered me, ultimately? Bitch Planet reminds me that “Art Imitates Life.” It truly does. As I finish typing up this review I’m sitting and reflecting on the bit of self-care that I had today after reading about how Natasha McKenna’s life ended. After reading about her death via Twitter I mentally had to log out of life. It wasn’t too long after that when I was reminded of Sandra Bland, whose death in police custody which was originally found as a “suicide.”

I think of the four other Black women who were found dead in police custody including Ralkina Jones. Gosh, I think of the life expectancy of a trans woman, especially if she is a WOC since so many of them are being murdered with Shade Schuler being the most recent, I believe. It bothers me that this comic is fiction but serves  as an ever-present reminder that as a woman I don’t feel safe.

I don’t feel safe most of the time by and with those who serve as authority figures, those who are called to serve and protect and by those who say that they have mine and other women’s best interest in mind. It bothers me that this piece of fiction is a reminder that there are still too many voices of marginalized groups like women and People of Color and the like that are silenced.

We were forewarned that this issue would serve us a terrible blow within the story, which makes me look forward to the next issue which focuses on deceased character’s backstory because I felt I didn’t have a chance to really get to know her. Truthfully, none of us did. As this story arc ends, I am reminded that the women of Bitch Planet still have a battle to fight, a game to throw their bodies, their lives into and some fire inside them that makes them non-compliant.

See you all next time on: