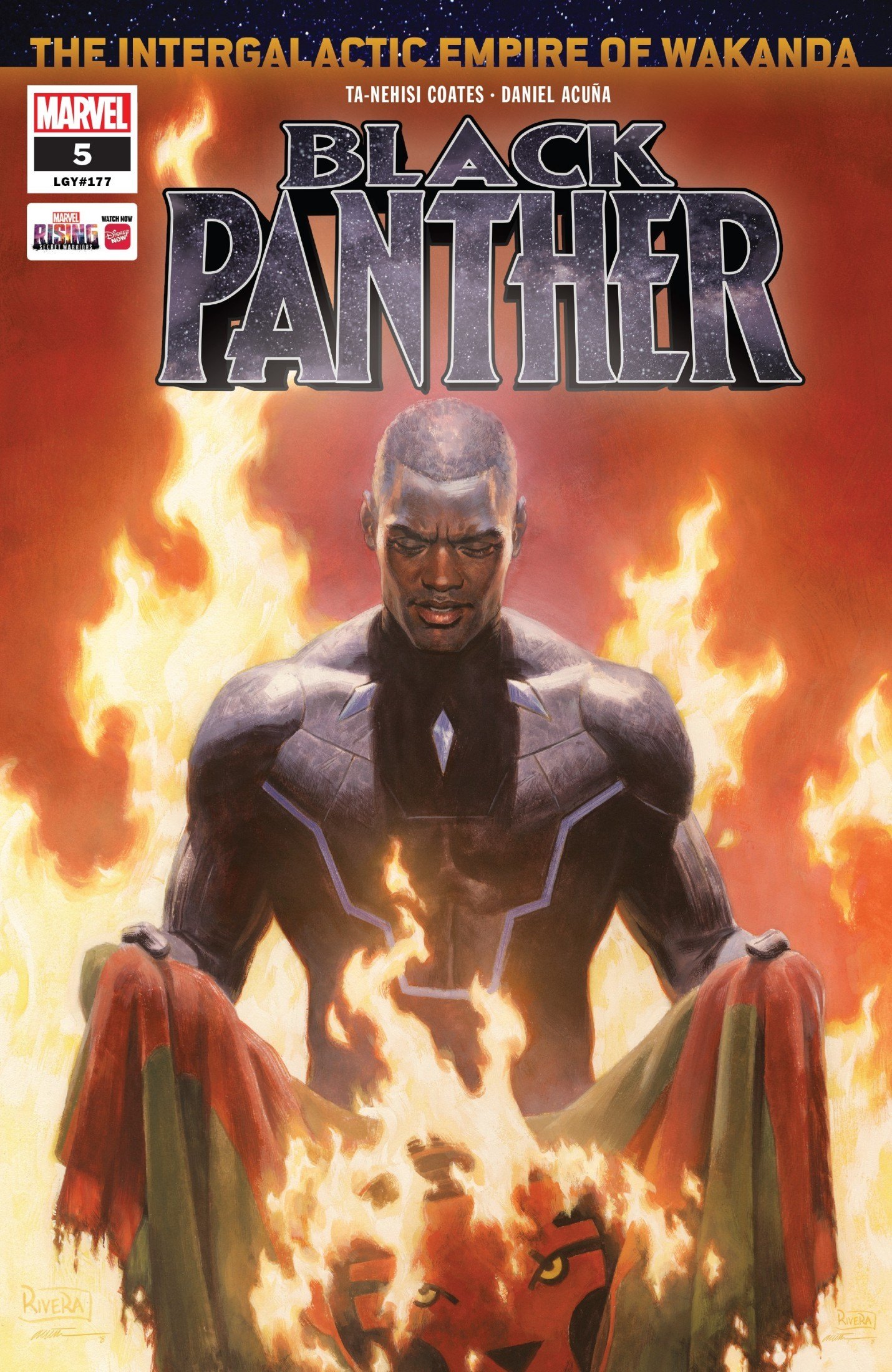 “The Empire doesn’t just steal our past. They steal our futures.” – T’Challa

In issue #5 of Black Panther, the spirit of the Maroon resistance lies broken after the death of Captain N’yami. Set five years after the issue four attack that saw N’yami killed by Manifold, the Maroons remain hidden in Nehanda’s Lattice, the fair reaches of the Wakandan Intergalactic Empire. Due to not only the loss of N’yami, but also the hesitant promotion of M’Baku to Captain, the Maroons have taken to hiding rather than striking. T’Challa, adrift and in self-exile, pushes himself to the limit time and time again to end his own life, but in actuality only confirming his own destiny.  Nakia, his closest living connection, reaches out to him once more to reconsider joining the ranks of the Maroons. 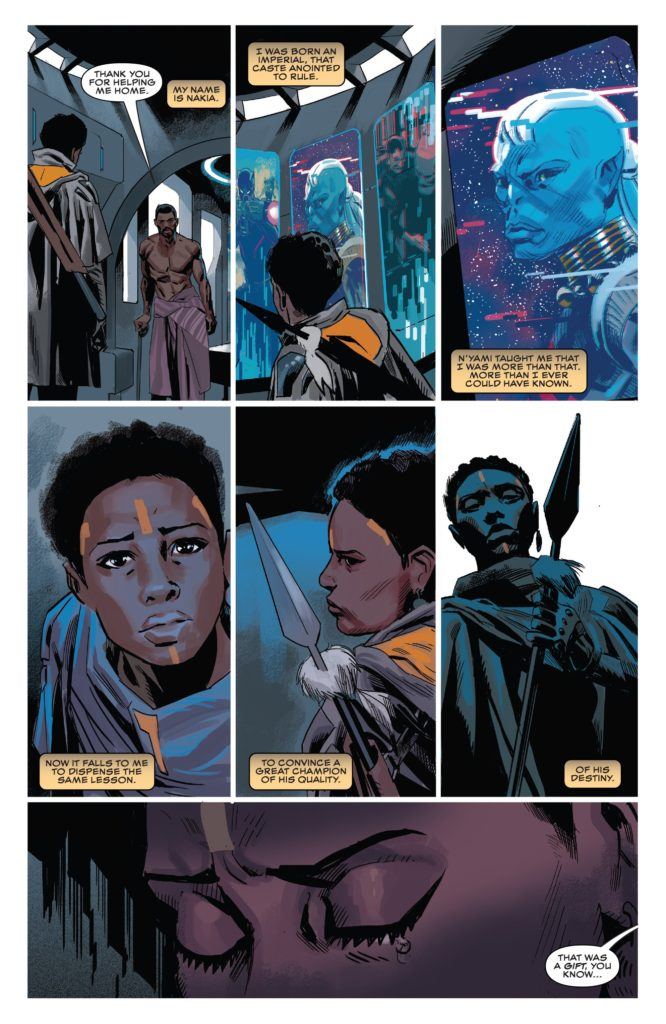 SIDEBAR: Admittedly, this issue feels like a very strange narrative moment in the run of the new Black Panther series by Ta-Nehisi Coates and Daniel Acuña. The audience has already taken a reality jump with the 2018 volume of BP, but now jumping five years in narrative time from issues four to five feels…let’s stay…rushed?

As Nakia hopes to persuade T’Challa to rejoin the fight, she mentions struggles of the recent past – mostly hiding, taking in more refugees, and withstanding an Askari attack. T’Challa, on the other hand, spent his time growing a melancholy beard and withdrawing from the Maroons. Her own feelings for T’Challa aside, Nakia trusts the wisdom of their deceased leader. Knowing that she cannot sway T’Challa any other way, she leaves him with a video message from N’yami, revealing her reports that T’Challa is indeed “He Put the Spear Where It Belonged.” 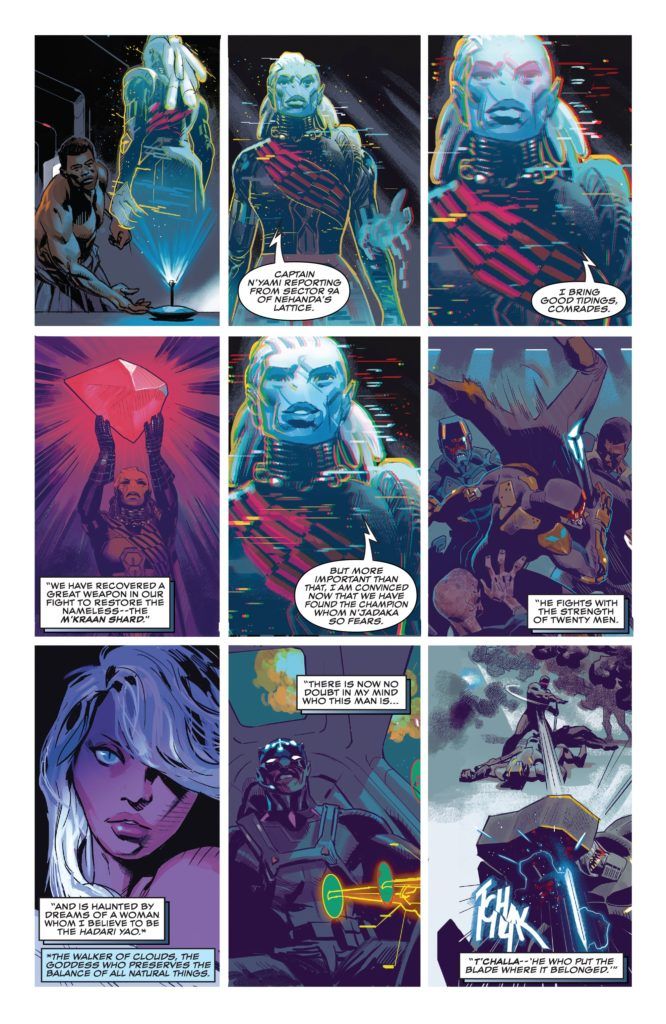 T’Challa, realizing that he can no longer run from his self or his destiny, returns to the Maroon base and the reader is ready for the next issue. Strangely enough, this issue is both an awful and great place for a new reader to start. The first two and half acts are merely recaps for the first four issues of the series, and the cliffhanger merely puts us where this issue should have started. What the issue flubs in narrative delicacy, it succeeds in the intimacy between Nakia and T’Challa. As drawn as they are to another, the powerful “phantom” of a Wind-Rider lover whom T’Challa cannot forget keeps his actions and feelings at bay.

Overall, the issue really comes off as a delay of action in a storyline that has been thrilling and fast-paced during the first four issues. The mode in which this transitional issues handles the changes is a bit abrupt though. It feels like a bit of a narrative stretch for us to believe that in the five years between issues four and five, the empire has not managed to destroy the Maroons, Nakia has withheld information that could have motivated their greatest warrior much earlier, and they have been hiding in the same system undetected for so long. Still, the art by Acuña and the coloring team make for a beautiful page turner.  A curious series…let’s see where it goes.

7 out of 10 Time & Reality Displacements