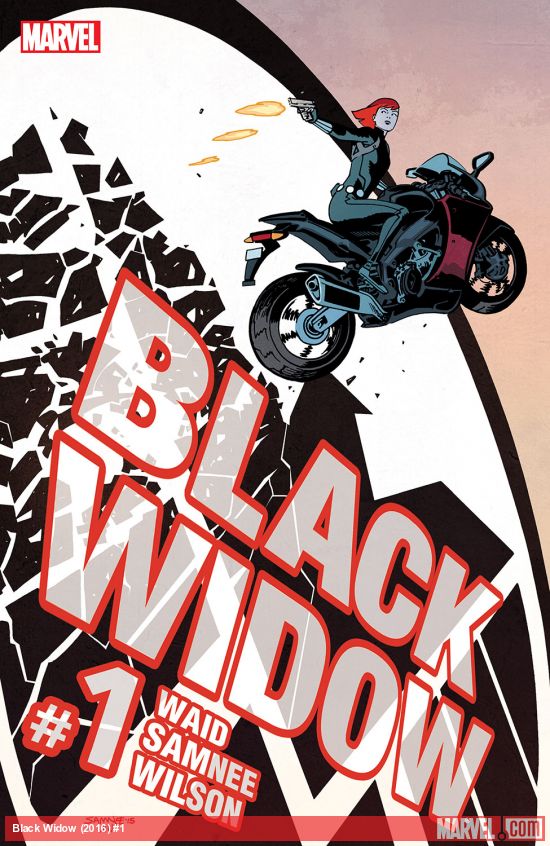 I’m not even sure how to start this review because I can’t put to words what I just read. I just read the comeback of the Black Widow Natasha Romanov and… it’s like when pre-WTF-happened Kanye West said, “They want gun talk, and I don’t go there enough.” We’ve loved seeing Black Widow on screen and have been wanting the longest for a movie (she stole the show in Captain America 2, fuck what you heard), but for whatever reasons studios are like “Nah.” Well, Marvel finally got Natasha Romanov back on her dumb shit. Back on her espionage and twin glocks gun talk. Back on her me-myself-and-I spy shit. Back on her all-I-need-in-this-life-of-sin-is-me-and-my-wrist-shooters shit. Natsaha back on her international woman of mystery steez, and gawd it feels good to read.

The best thing about this issue is how it goes hard. Natasha is being declared an enemy of S.H.I.E.L.D. and all the agents are after her; now when I say “all the agents,” I’m talking everybody. You know you done pulled some shit when even the office agents are comin’ for you. Natasha done went and got Gary from accounting and Ragini who’s here on a work visa trying to tackle her by the printer. That’s when you know shit is real. 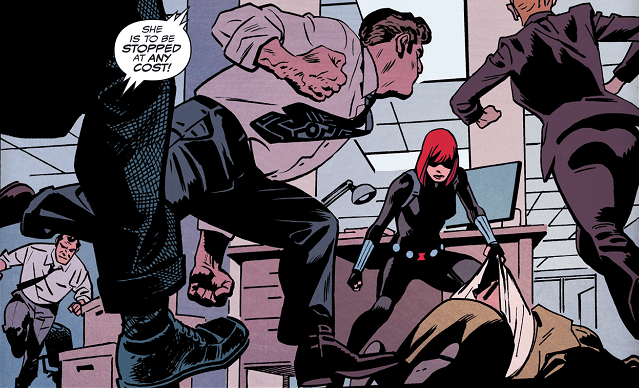 I’ll skip over exactly how Natasha escapes the Helicarrier, but all I’m going to say is shout-out to the agent in the hijab who drove the whip after Natasha with no fear in her heart whatsoever. This book is all action, man. This book felt like watching a great escape scene from a classic Bond flick. Samnee and Waid do an incredible job showing how dangerous Natasha’s actions are by giving her no dialogue. Romanov is all business and no banter. The S.H.I.E.L.D. agents look more impressive due to the silence as well.

The agents are the only ones we hear dialogue from, and they aren’t pushovers. Waid and Samnee show them as capable nameless agents able to do their jobs to the best of their ability. At the moment, that job happens to be taking down Natasha, and they are relentless. Samnee’s art reflects that this wasn’t an easy job for Natasha in the least. These aren’t simple hechmen being dispatched, these are top notch agents comin’ for Natasha and carrying their weight with the gawd. Natasha is, as far as we know, the bad guy here — so we have to keep that in mind as well. I also love how during certain moments of her escape Samnee gives Natasha this sixties-era spy caper type of look as she does small things like looking over her shoulder as she checks to see if she got away. 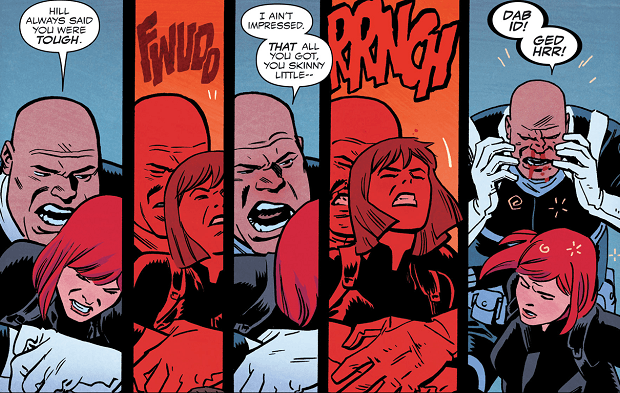 Samnee’s artwork got me thinking the homie should do stunt choreography — he has Natasha doing so many tricks that seem so invisible that you find yourself going back to see where Natasha set up the action up two panels prior. The maneuvers look flawless and almost out of nowhere by the final panel. Samnee makes Natasha look like a master of the prestige. Samnee and Waid did great creative tag-team when they had Daredevil flourish with the revamp during their run; I expect nothing less with their run of Black Widow and it’s even a funny coincidence that they jump to Natasha’s title as she and Daredevil used to share a series back in the day (but you know what we say about coincidences around here). Natasha’s first issue delivered glory and left me sitting her like “TELL’EM WHY YOU BAD, BLACK WIDOW! TELL’EM WHY YOU BAD!”