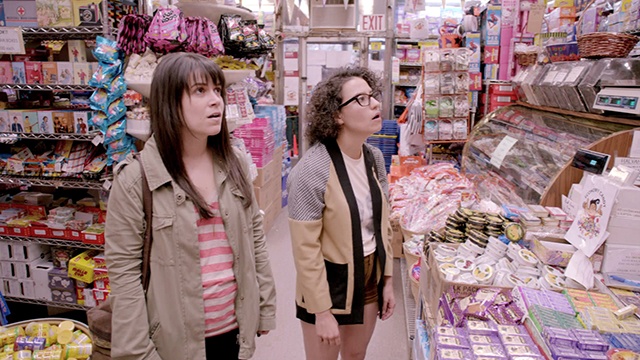 There has been a myth that women aren’t funny, which is completely unsound because gender doesn’t automatically make someone not hilarious. If you’re doing comedy you are either funny or not, hit or miss, that’s it. I think we’ve had women in the game for years that have dispelled this idiotic rumor, but in 2015 Broad City has given the Chun Li spinning bird kick to the the glass ceiling.

Will Evans done told y’all how Archer is murdering the comedy game with the way they drop their jokes. I’m going take it to the live comedy series and the trap game is most def Broad City. I remember being a huge fan of Community but I got lost around season 4 or 5 (even when they brought back Dan “The Man” Harmon). It felt like the show ran its course. I was looking for a new champion show to back and then the Lord blessed us with Abbi and Ilana, two best friends that you immediately relate to and ride for straight off the strength.

Already into their second season, this comedy tag team is fucking monster man. I remember watching the first season thinking, “This is gold…this is pure fucking gold. They get it.” The best part of watching this show is seeing two friends do what you and your friends do — random “Murder, Fuck, Kill” questions to pass the time, sharing YouTube videos, Skype sessions, and of course, obscure pop culture references. Not only have they perfected their chemistry but they also nail current pop culture jokes in today’s world.

See what I mean? The second season has the same feel as the first but with the stamp of approval now. What’s also dope about the show is that they tackle issues regarding dating in today’s world. Where as Abbi has been pining over her neighbor, we’ve seen Ilana hooking up with Lincoln (Hannibal Buress) but still seeing other people. There are no labels for it, and it isn’t heavily weighed upon until Ilana realizes she has been seeing more and more of Lincoln, eventually to the point where now they may in fact be a couple. Which she realizes, but then immediately wants to rebel against, because it’s 2015, son, and labels aren’t on the menu when you just being free exploring sexuality, nah mean?

“I can’t wait to officiate your gay wedding. Straight people always say that and it’s gross. It fetishizes their gay friends and that’s not cool.”

Come the fuck on man, not only are we making jokes, we’re fucking educating motherfuckers in the goddamn process? Bars! Abbi and Ilana be putting the feminist game on fleek as well and also will clarify to one another why something the other said may have been problematic. This is that shit we been fucking needing man. The show is genius in that at one moment we can be talking about oppression, glass ceilings, racism, and then flip the game to how dating was like before online sites and Tinder-like apps…

It’s that ability to switchback and forth between conversations and outlandish humor that makes this show so fucking relatable. This is what we do with our friends man, this show offers the behind-the-scenes NO LIMITS friendships man. We also see the quirky things they do when alone. We had Abbi having to occupy herself in an episode where she got stuck in a giant hole in Central Park without her phone. Ilana went to get help leaving Abbi with weed to calm herself down and help with the pain of a swelled ankle. Pure awkward hilarious ensued.

Another thing that attracted me to this show was that it takes place in New York City but they straight-up kept their depiction of NYC one’hunned. I grew up watching Friends and Seinfeld and I couldn’t recall seeing many people of color on the show or in the background of their “NYC” at all. It’s however many years later and I see HBO’s Girls, which a lot of people love, had the same formula (they did the fix [read: Band-aid treatment] with Donald Glover for what… 2 episodes?). I tune into an episode of Broad City and I truly see New York City, not just streets I have been to and graffiti art, but I see the fucking multitude of diversity and people man. Store owners, pedestrians, etc, etc.. You truly see the people of New York City on this show and it doesn’t stop just in the background. POC are a part of the recurring cast as well with Lincoln and Ilana’s roommate, Jaimé Castro (Arturo Castro).

We got people of color with chemistry and not just used as props to feign diversity. There’s an episode where Ilana and her mother are shopping for specific handbags and are talking Chinese with the vendors to be taken to where the good shit is. They run the fucking extra mile and I am loving it man. It feels like a show we been straight-up waiting to be delivered to TV. The jokes are multifaceted from crude, to informative, to intellectual and the situations we find our protagonists in is never truly something you can predict. Each episode is memorable and genius in its own right. I’ve yet to see the typical sitcom type of plot with this show.

I think Abbi and Ilana have seriously taken the comedy game by storm. In my opinion they are blowing a lot of shows out of the water and I’m not seeing that stopping anytime soon. Girls is the unseasoned (food of your choice) version of Broad City to me. I’m over here trying to figure out: Am I the Abbi or Ilana in my own friendships? (I wanna say Ilana but in my heart it’s Abbi.) We gotta protect Broad City at all costs man. This is a show that already has a cult following and it’s only growing larger. It’s not even a hit or miss comedy this shit, is a 200-hit hyper-combo. Abbi and Ilana have ushered in a brave new age of comedy and I’m here giving all the yassssssssss for it.