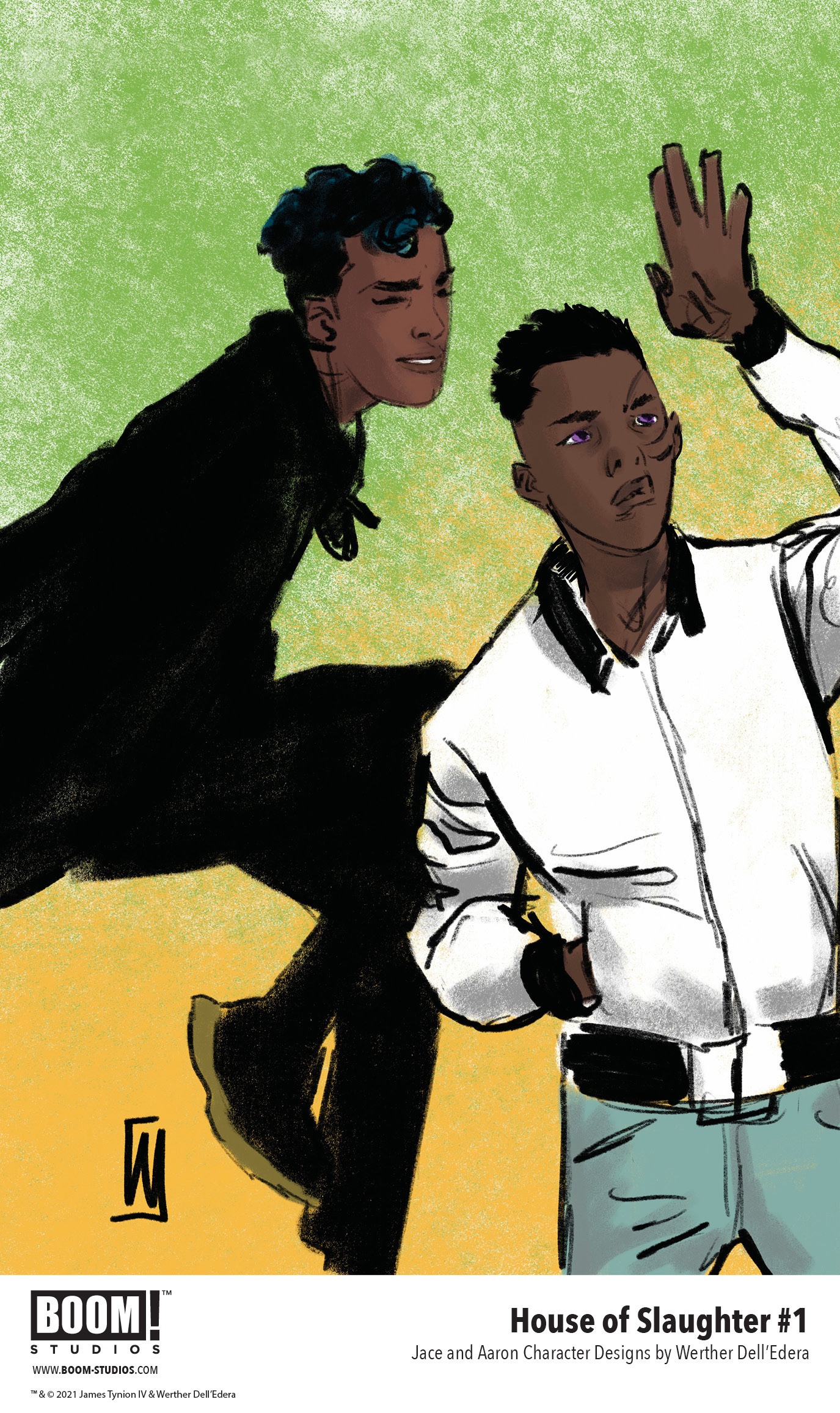 House of Slaughter is the latest offering BOOM! Studios, set in the universe of the Eisner Award-nomiated Something is Killing the Children. Last month we got our first look at the principle characters and this time around, we had the opportunity to sit down with Tate Brombal, the writer, and Chris Shehan, the artist, about their foray into the horror universe.

Black Nerd Problems: To start us off, for the readers who may be out of the loop on the lore of Something is Killing the Children, how would you explain and describe the House of Slaughter?

Tate Brombal: The House of Slaughter is one of the many houses in the Order of St. George, which is this world international spanning secret society of monster hunters that track and kill the monsters that only children can see, because they are eating the children, they are killing the children. So somebody needs to take care of that.

And that is what the Order of Saint George does. House of Slaughter is where Erica Slaughter was trained. She’s the main character of Something is Killing the Children. That is kind of the background, but this book focuses on Aaron Slaughter, and it’s kind of this world expanding shoot off series that can finally delve into the house itself and tell a story outside of the main plot of the main series. It really gives us a chance to explore all of the really great characters that James and Werther have come up with in the main series, as well as teller own series about another hunter, Aaron, in these first five issues.

Chris Shehan: Yup. That was it. That was perfect.

BNP: Related to that, what are the challenges of working with an already established intellectual property coming in and having to take a story that has roots in something that’s larger and then making it your own?

Chris: It challenged for me. I think was trying to make it look and feel like it’s in the same universe as Something is Killing the Children while still being myself and having my own art style, finding like a nice balance. I think one of the things that actually helped was, Miquel the colorist, coming over from Something is Killing the Children, also coloring House of Slaughter that helps kind of keep the mood and the vibe the same. It was more of like trying to find a good balance where I could lean towards Werther’s art style while not copying it and keeping my own just so that you can recognize the characters. You can recognize the locations, but I can still bring my own style and preferences into it.

I was grateful to receive a bunch of Werther’s sketches, reference images, and lots of documents from James and Tate to kind of just make sure everything exists in the universe and looks like it exists in the universe. It’s new to me. I’ve never worked on anything that was already an established property. It’s been a lot of extra work, but it’s been a lot of fun too.

Tate: I fortunately had some experience working in established IP, through Black Hammer and doing my Barbellion book. So, I had some practice there and kind of took what I learned from that experience. Hopefully, I got even better at it with this book. That was the hope. Basically, it’s all about being additive in my opinion and just kind of giving back to the universe, staying true to it.

I think people will see that a lot of the ideas and character things I came up with for this book is actually going to be carrying over to the main series, which is like, what I always want to do is kind of give James, in terms of the story, stuff to kind of really enjoy and build on top of. The biggest thing is really fitting into the universe, getting the characters down, but also not losing my own voice and vision and kind of point of view on the world. It’s themes, it’s characters that I can bring to it.

BNP: Speaking of being additive, what were your hopes and what did you want to add to the character of Aaron Slaughter, who readers had met before in the mainline series? What were you hoping to introduce?

Tate: When we first meet him, he’s kind of an a-hole, he’s very by the books, and he’s Erica’s handler in the main series. With the flashback arc in the previous arc, we got to see more of him as a kid and kind of understand him a bit more. So, I really wanted to delve into a lot of that. And when I actually started developing my interpretation of the character, I had only read like the first issue script of that flashback arc.

I already had all these ideas and was planning like why he was the way he was to add dimension to why he might be so by the books, or be kind of a bit of a brat, honestly, when he was younger. Then when I saw what James was doing in the main series in that flashback arc, like everything we’re doing lined up and we really understood what James was trying to say with this character. I really wanted to frame him in why he is that way. One of his defining moments or stories in his long history as a character through this five-issue arc, and hopefully, this arc will explain why the Aaron we knew in the present is the way he is. That’s the hope.

BNP: I don’t think this is a spoiler but the first issue sort of centers around this sort of blossoming queer relationship between two men of color. Were there any challenges writing that? How did you approach this relationship that is going to be the center of this five-issue arc?

Tate: The fact that a queer, interracial couple are at the center of such a big series isn’t lost on me, and I’m taking that responsibility very seriously. I know how important it is to diversify queer relationships and to showcase queer love between characters of color. So, when I had an opportunity to come up with a new hunter and Aaron’s love interest, Jace Boucher came together pretty quickly. Even better, I was able to layer him into the world’s history and geography in exciting and organic ways that make a ton of sense! (There are lots of secrets there, so you’ll have to read on!!)

I did my best to do my due diligence and make sure these characters and their love comes from a very real place. I just hope that it resonates and that many readers can see themselves in this romance and these characters on the page. And I really hope Aaron and Jace’s love story becomes one for the ages — because it will definitely have a lasting impact on both their lives and this universe moving forward.

Chris: Honestly the first few pages you get to see older Aaron, the Aaron everybody knows, but you get to see him alone. I assume it was intentional, but I feel Aaron when he’s not around others, he’s much softer of a person. I know he toughens himself up for a lot of reasons in which you get to see throughout his past. But I think seeing him smile, seeing him soft and kind, in this quiet moment in those first few pages, which is not a spoiler because it’s the preview pages that you can see. I really liked that a lot. I like how we started, we’re showing that Aaron is actually just a very soft kind person and he just kind of puts up a bit of a front to protect himself and to protect people he cares about. And, I don’t know. I thought it was really nice, really nice moment that Tate, and I really loved to draw it.

Tate: Yeah. My immediate thought was Aaron and Jessica’s scene just because I love their relationship. Um, but then Chris is right. I love the moment with the deer. I really take those opening pages seriously. And it was just this super sensitive moment that I really enjoyed writing. And I love showing that side of Aaron to kind of start it off before we see all these other shades of him. And then of course, there’s one of the final moments when Jace stands up for Aaron and kind of catches Helen’s punch after we had just seen, like in the first half him taking all these punches and no one standing up for him, kind of that moment of someone finally standing up and protecting him. I really liked that moment as well. And Chris just drew it so perfectly.

BNP: What do you hope readers feel and take way after the reading the first issue?

Tate: Hopefully about first impressions and how we’re like judging characters and who they are. I know Aaron when he first showed up he kind of, like I said, came across as that a-hole and this series is all about, this first issue shows all the different, hopefully shades of him and how there is much more dimensionality to him from when he’s saving that deer to when he’s trying to show this heroic bravado to the scared kid to when we see him like crying and hurt to when he’s like at the end, doing this tour with like this big bravado kind of trying to seem so tough.

And then again with Jace where like, he’s this mysterious figure who we may think is one way and kind of comes off kind of gruff or strange or mysterious, but then we see him kind of step in and protect Aaron. It’s just this idea of appearances versus reality kind of idea, which I hope that resonates with people.

Chris: I hope that readers get really mad at James for killing Aaron, because we’re going to make them really love Aaron.

BNP: That’s truly the dream isn’t it? Last question, what’s a piece of media you wish more people knew about? Not necessarily your favorite, just the thing you wish you could talk to about with more people?

Tate: I would say recently I read a book called The Elementals by Michael McDowell, who is the writer of Beetlejuice and a lot of those movies. And it’s just such a good book and his voice is incredible.

Chris: I’m rereading The Dark Tower by Stephen King, and I know that’s popular, so it’s not really the best answer, but I also don’t know a lot of people who talk about it in a bigger capacity. I’m also always trying very hard to get people to read comics from Vault Comics. I think everything that they’re doing is masterful, and they’re like right on the verge of, they’re kind of right there where they’re a bigger publisher, but they’re not that big yet, but they’re good enough to be that big. If anyone who wants to read comics for the first time, or if any readers want to try a new publisher, I’m always saying, Vault Comics. I think everything that they do, I can’t even pick one thing.