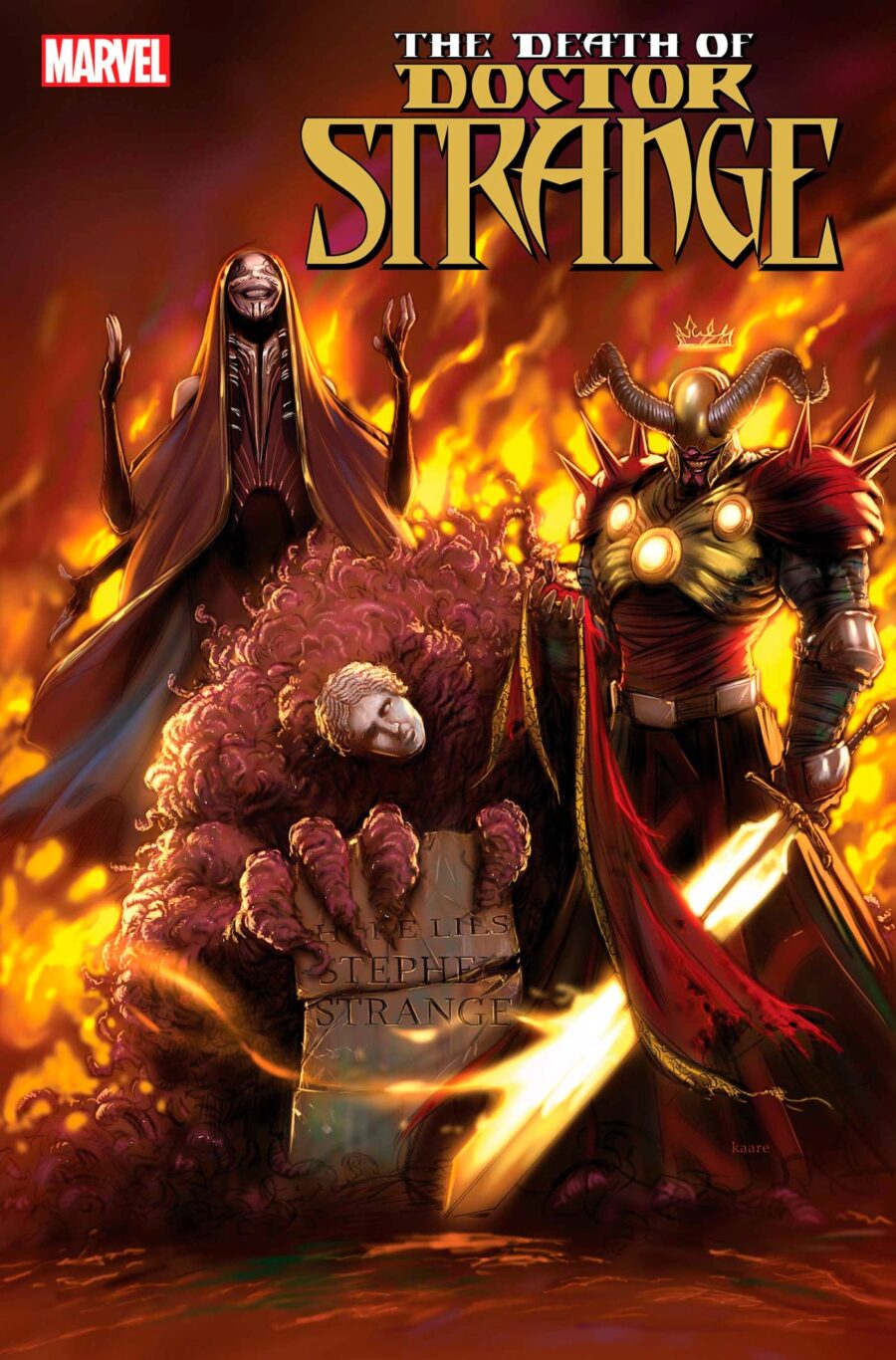 Let’s get something straight, off the rip. I called the killer ages ago, but I digress. We’re not here to discuss my superior Clue skills or Inspector Gadget fan club membership, we here to dive into the murder mystery of Doctor Strange. My boy Chris said it beautifully in the issue #1 review when he described how tough it is to pull off the death of a major character and a “whodunit” mystery, and you know BNP predictions don’t lie. Mackay has put together a fine story surrounding Strange’s death, but the other side of the coin fell a little flat in The Death of Doctor Strange #4. Luckily, there were some additional plot points that delivered quite nicely.

First, we need to talk about The Three Mothers, their Peregrine Child, and how they beat the confidence, snot and COVID vaccine out of every Avenger that dared to step to them! Mackay really drives home a point I never took too seriously when it comes to the Sorcerer Supreme – without a Doctor Strange around to defend the Earth, all manner of mufuckin mystical threats can pull up and lay waste to whatever they dam well please.

Enter the Wyrd, an alien mage-priestess; the Crown, a powerful warrior-queen; and the Crawling, a massive monstress with the body of acid-mouthed worms. If I’m being honest, I expected these villains to put up a good fight, but to get their asses beat by the good guys so we could focus on this whodunit. Nope. The Wyrd and her magical abilities left homegirl unscathed as every blast sent her way was redirected by these ill-defended portals and she hit both Captains with the sleepytime tea.

The Crown went toe-to-toe with Asgard’s crown and made Thor and his hammer look like Tim the Tool Man Taylor instead of the all-powerful God of Thunder he is! I don’t even know where to begin with the Crawling. This thing eats photon blasts and repulsors, shoots acid lasers and eats away at Tony’s armor with ease. What’s going on underneath all those writhing worms? A mobile Greek statue? An extremely pale woman? I’m terrified at whatever the answer might be. These women seem like another level of villainy and I haven’t even discussed their towering child that hungers for magic, never sating its appetite. It’s no wonder 4 extremely powerful and magical dread warlords all hightailed it to the Earth to hide from The Wyrd.

Ghosts of a Sorcerer Supreme

These 3 4 destructive forces of mystical arts aren’t the only thing keeping me interested in how The Death of Doctor Strange ends. I’m digging the way we still get some aspect of the Sorcerer Supreme while also acknowledging his death. Doctor Strange created a temporal phantom by sacrificing a week of his life, so there could be some version of a Strange to help solve his untimely death if that death happened to occur. I call him Noob Strange because he was made when Strange was still a newbie sorcerer and to pay homage to Mortal Kombat’s Noob Saibot.

Mackay gets some brownie points for putting together some very bearable and honest moments of self-worth in a world of unbearable, hollow writing. Noob Strange has a genuine moments of imposter syndrome and self-doubt that is much needed before taking your ghost dog out for a walkie to clear your head and begin to solve this murder. Mackay hooks Mordo up with 2.3 seconds of shine not looking like an insufferable c-list villain, a welcome reprieve. Lee Garbett and Antonio Fabela make a great illustrator and colorist combo, complimenting Jed’s story well.

The Death of Doctor Strange – In Context

As stated at the top, who killed Stephen Strange is much less important than the tie-in books and events that result from his death. I’m quite excited to see where the story of the Three Mothers goes, because these are some new characters to fear and be excited about all at the same time. We’ll see if Noob Strange has one last magic trick up his sleeve when issue #5 drops later this month!