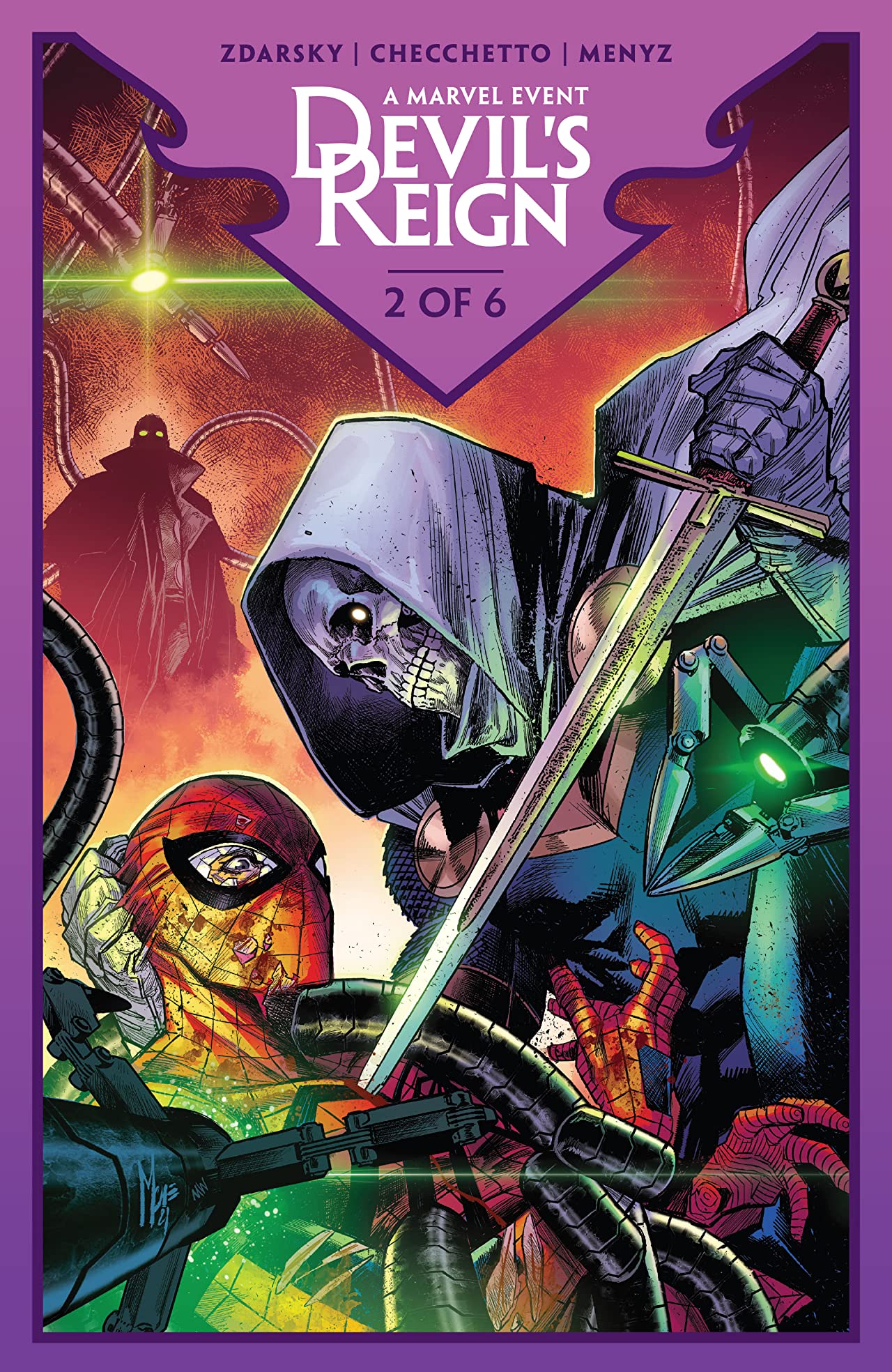 Chip Zdarsky has taken the wheel and is looking like Ansel Elgort in Baby Driver right now! The setup has been real in Daredevil and the first issue of Devil’s Reign. Heroes using their powers get outlawed and a classic villain puts together a team of equally villainous bounty hunters to hunt the heroes down and bring them to “Justice” for using their abilities to save lives. Sound familiar?

Chip is going about things a bit different though. In Devil’s Reign #2, his team of heroes decide to get political and put Tony Stark in a position to beat Fisk in the upcoming mayoral election, but most recently sprinkle a little ghost pepper spice into the team dynamics and pivot on tactics and motives they originally came up with too. And you boy is aboutttt it!! This ideological shift to go with a more relatable man who’s never hid behind a mask or suit of armor may be the only way to loosen the iron grip Kingpin has on the city, but the fallout is something to look out for.

Kingpin goes on the offensive and opens up a ‘02 Brahma Bull can of whoop ass on 2 different fronts. The direct approach and the cerebral one, both producing devastating outcomes. In the game of mental warfare, secrets start getting spilled, and I’m talmbout life changing superhero revelations you can’t undo – even with the best writer retcon! On the flip side, we’ve seen what Fisk can do when he imposes his colossal will on others, but it’s arguably more impactful when he can force others to do his benevolent bidding. Let’s not even get into the fact that he got supervillains to sign up to be his enforcers like he was the Monopoly Man giving out “Get Out of Jail Free” cards and coupons for free Popeyes biscuits.

While I respect everyone’s reason for their attention being focused on the underlying tension that is undoubtedly building between Luke and Tony, I have my gaze fixed elsewhere! Out at The Myrmidon, Mr. and Mrs. Fantastic got some real ass skin in the game, and Sue Storm is playing for keeps! You better put that Sue STORM respect on her name cuz shorty came out the gates swinging 7th grade lunch trays like Barry Bonds at the plate when they tried to test her man, and it gave me LIFE!

It’s real cute seeing all these heroes on the run banding together, but what about the homie (who would completely and rightfully be known as a mad scientist in any other reality) who lost his lab to an even madder scientist! The kind of psycho that’ll be the cause of the next level carnage about to smash through NYC! What about Reed Richards getting completely shafted?! Ain’t nobody worried about Sue, she gone get hers. As for Elektra? I’m perhaps most intrigued about where her story is going.

Chip Zdarsky sure has his hands full, but he’s not making this mini-epic more than it has to be. Just better than Civil War II na mean. He knows he has a great storyline, and it could turn to rubbish by adding too many additional layers. (*cough cough*) That’s one of the traits I respect most in comic book writers today. This story is flowing beautifully, and the tie-in issues should expand on things little by little, while this book serves as the driving force behind it all. Marco Checchetto quietly doin’ the Lawd’s work while fans soak up every glorious panel of woodland, laboratory, prison, or skyline background is what you love to see, and reward with more work in the industry. Here’s to more Marco in these comicbook streets and here’s to Devil’s Reign #2 with another good issue.