Back in August, it was announced that Millar and Netflix had struck a deal for his flourishing company, Millarworld, which included 17 Mark Millar properties. Since then, it’s been radio silence until now. Millar just went on record to get people hyped with the first big announcement.

Millar sat down with Comicbook.com and was asked about his thoughts on the partnership with Netflix. He kept it 100 as he always does. “This is like being asked to dance by the best-looking person at the party. There’s no more amazing place to be than Netflix right now and no better home for the Millarworld characters. Let me try to put it in perspective. A big movie studio makes around 30 or 40 hours of original material every year. Netflix has over 1,000 hours of original content this year alone and growing.”

In other words, NETFLIX IS THE SHIT AND THEY READY TO PUT IN THAT WORK. Across the board! Get ready to see 3 or 4 (perhaps more) Millarworld titles come to Netflix in the next few years. It doesn’t matter which ones, they’ll be greatness. A Jupiter’s Circle origin movie would be wildfire flames. Nemesis would drop jaws. Superior would crush it. Huck, Chrononauts, the list goes on. Millar says in the Comicbook.com interview, “We fly out for meetings and do calls to LA in the evenings, but for the most part they know the real benefit is just having me create stories they can use and so my 9-to-5 is very similar to before. Part of the deal when we sold is that we’d come on as employees for a number of years and, as crazy as it sounds, it’s my first real job. But I couldn’t love it more. If I’d known working was this much fun I’d have gotten an actual job years ago.”

Did this guy just admit to finessing the system?! Homeboy just said “Every now and then I get flown out to NY and LA to collab, sign checks, drip swag on the Hollywood Walk of Fame, and stunt at swanky Manhattan parties. Sometimes me and my wife (who’s doing all the heavy lifting btw) take calls and talk business, but most of the time my day basically consists of sippin Scotch, writing stories, tweeting, and creating more content to pitch to Netflix.” Like, what are we even doing here. Millar just got paid $25-100 mil (big range, I know) to do what he was doing for the last 20 years. Money moves.

Millar describes the new job this way: “It’s a full time staff position at Netflix now and my wife Lucy, who ran Millarworld before, has been made CEO.” He goes on, “Now that Millarworld is owned by Netflix it’s a pretty different set-up than before. I’m creating stories directly for Netflix, to be used as movies or TV shows, but some of them are going to be comic-books too following the same stories and design bibles. I’m not going to own them.” 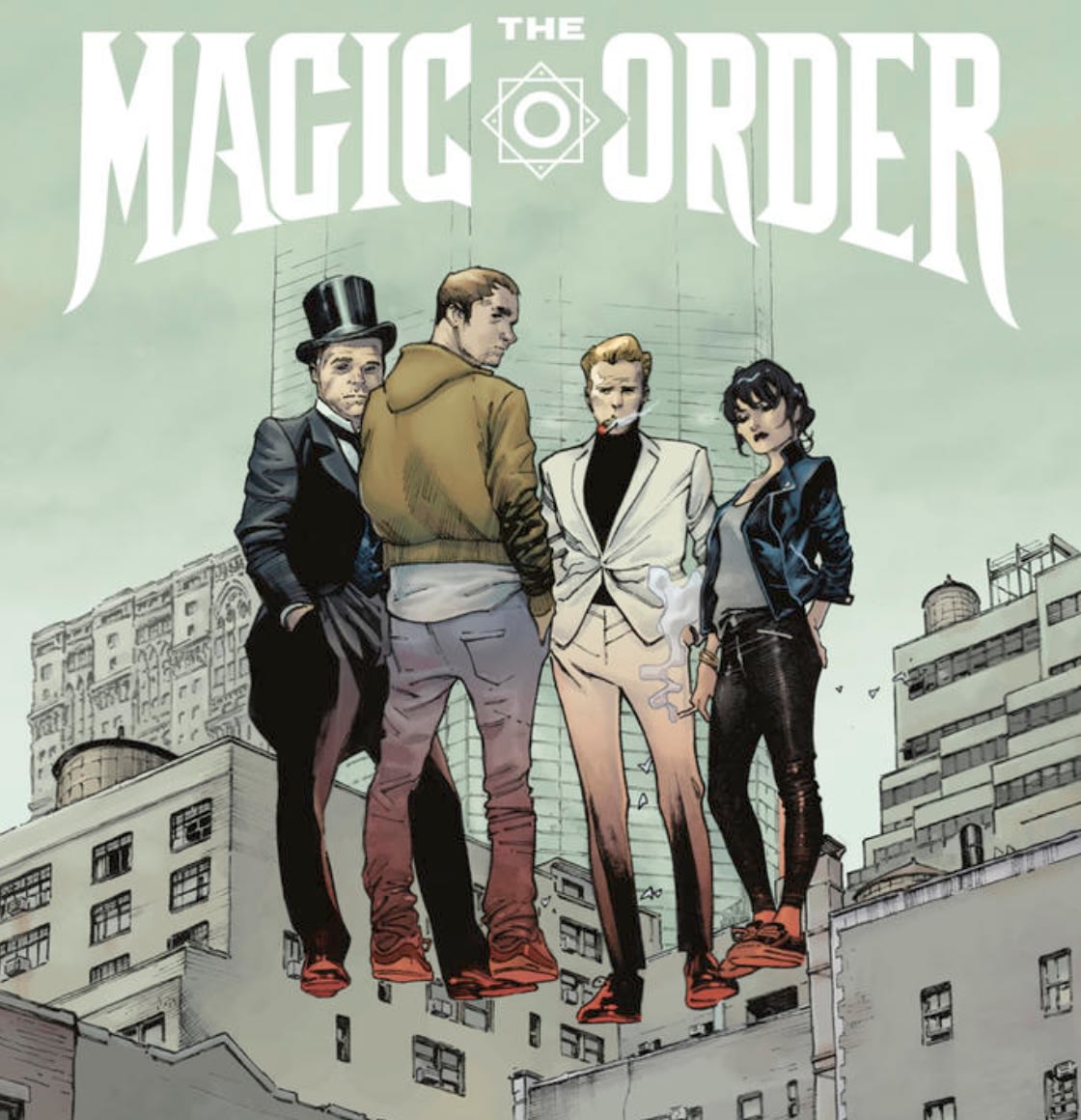 Millar just announced his first venture down this Netflix Comic Book route will be alongside artist Olivier Coipel. It’s a new and intriguing comic called The Magic Order that follows 5 fix-it families across the world who get called to squash otherworldly threats. Things change when members of those families begin to catch fade after fade. It will be an fantasy akin to Harry Potter, except it will feature darker mob-like elements. R-Rated gangsta wizards and spells for the fans?! Sounds like an untapped market that could flourish with so many dying for more wands and mysticism.

When asked about the plans, Millar says: “Honestly, right now there’s just nothing off the table. That’s what so exciting about these guys. There’s no limit and all the various departments are poring through our back-catalog. It’s really just a matter of what excites us as we sit around the table and the best possible screenwriters and directors available to us. They bought seventeen franchises when they bought our company and I’d like to create that many again too for Netflix.”

Seventeen though?! The ambition of this man! You gotta be kidding me with that limitlessness. We could get that Pan’s Labyrinth meets Alien action/high fantasy hybrid in Reborn. We could get a super realistic, Defenders-style show with a dark Incredibles family dynamic in Jupiter’s Legacy. And I deadass take his word on Netflix digging through his entire catalog. I imagine each dept getting a Call of Duty care package of comics dropped on them as each employee is seething at their chance to devour every book and pitch their best storylines. They’re all at each others throats and one cat is debating why this show should be a Supernatural Thriller while another hits their colleague with a Sheneneh talk to the hand, drops the ill 90 second Powerpoint presentation, and moon walks out the office as the action/adventure dept goes wild and team Thriller wallows in their salty tears and sorrow!!

“We’re announcing a new book this weekend and it almost feels like we’re announcing a movie. The amount of thought and the number of people behind this is unlike anything I’ve experienced in over 20 years as a comic-book creator.” He goes on to say, “As you can imagine, all the best artists are very, very keen to work for Netflix too so I’ve really had my pick of the crop here. I’ve finished this series we’re announcing at the weekend and already on a second project. The first is a completely original piece of work, the other a sequel to one of our existing franchises people really liked a couple of years back. Both artists are people I Google in my tea-breaks. You’ll smile when you see who we’ve bagged.”

Following the initial detail-filled interview, it was just announced that one of the Google-in-my-tea-breaks artists writing one of his comic sequels will be none other than Mark Hamill. Luke Skywalker himself is up to bat and this isn’t his first time at the plate. He wrote a comic back in ‘01 called Black Pearl and penned a Simpson’s TreeHouse of Horror episode. No word on which title just yet, but we know it won’t be Kingsman (Hamill’s character made a cameo in the original run). Luckily for us, information keeps trickling out and Millar seems as excited as an 80’s kid in Toys R’ Us to give the fans more on this Netflix deal. Keep your ears glued to them nerdy streets.