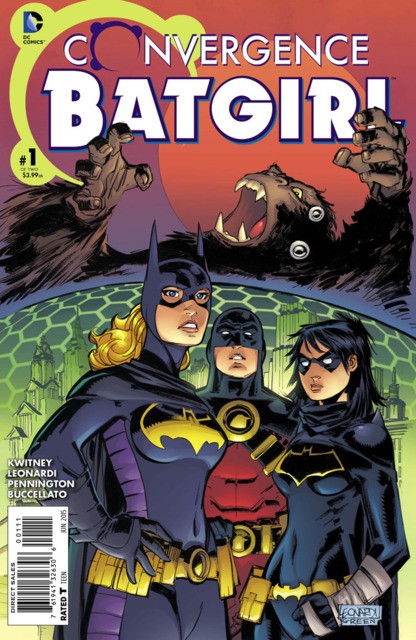 Be sure to check out Taj’s CONVERGENCE #1 review for back story to this crossover event.

I have this habit of describing my feelings about DC Comics like a bad on-again, off-again relationship (whether that says way too much about my love life or how I prioritize comics is anyone’s guess). That being said, if you know anything about my personal fandom of one Cass Cain then you know this feels like DC’s way of buying me flowers, chocolate, and a professional massage all attached to a thoughtful apology letter and an expensive steak dinner.

The comic opens with Stephanie Brown narrating the doubt of her prowess, because rather than the perfect warrior Cass or the genius Tim Drake, it’s she who has been chosen to be a champion of her reality. To me, this gives us a perfect reason to still have Steph’s trademark battle with self esteem (which surprisingly doesn’t annoy me here as it does in other depictions) without allowing Cass or Tim to come to her rescue, yet still allowing these fan favorites to remain part of the action.

What’s even more incredible is that the relationship between Steph, Cass, and Tim isn’t just in the fighting scenes (although paired with a certain cameo that would certainly be entertaining enough). In Stephanie’s flashback we get to see how the dynamic between the three of them living in the same city and working together as adults would look, something you only see in fan fiction or glimpsed when they were teenagers. Speaking of, there’s a good deal of reminiscing on the “good old days,” so be sure to have your Bat tissues handy.

All in all, this is the most excited I’ve been about a comic in a while and the pay off is incredible. Leonardi’s art does leave me a bit ambivalent in that, while I appreciate that Steph’s face looks a lot like during her original Spoiler run as opposed to the sort of blonde supermodel look that happened later, there are moments when the faces are really off-putting, and drawing Cass with blue eyes makes no sense.  But overall I’d have to say this comic is as close to perfect as you could humanly get.