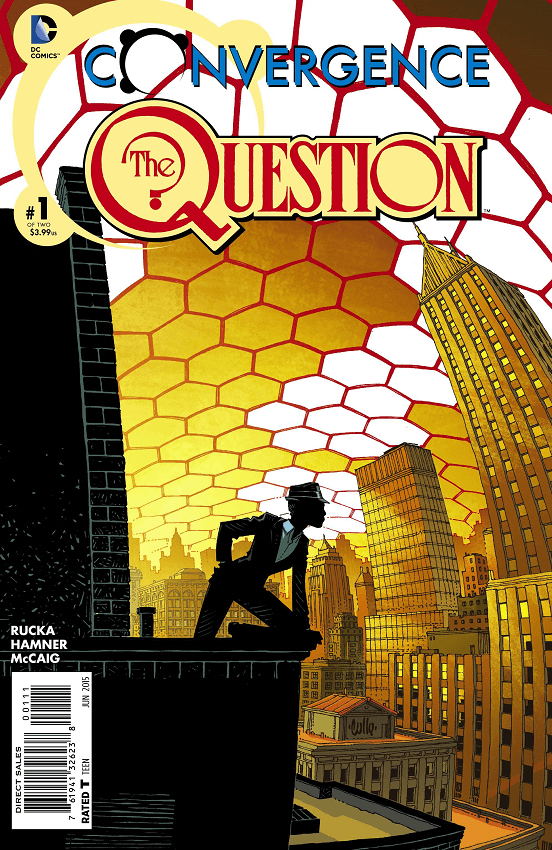 Be sure to check out Taj’s CONVERGENCE #1 review for back story to this crossover event.

Once upon a time I made a heartfelt case for why Renee Montoya not having her own comic was basically one of the worst oversights ever. Turns out I could have just waited a month, because Gotham’s resident good-cop-turned-faceless-detective has returned to kick ass and save Gotham one hospital and ailing father at a time.

For those not familiar with Renee’s history, this issue may come across as very dialogue heavy, but long time fans will be excited by two significant relationships that get highlighted in this story. The first revolves around Harvey Dent, the man who once fell in love with and then revenge-outed Renee’s queer relationships back in her GCPD days. Between the duo, Rucka’s writing definitely showcases what I consider the best aspect of any good Gotham story, namely the psychological implications beyond just the crime fighting action scenes.

The second relationship is with Helena Bertinelli, aka the Huntress, a vigilante who has had her fair share of interactions with Question incarnations. I was pleasantly surprised by and love the idea of the two working as partners/roommates since their personalities provide such a nice contrast in how superheroes handle emotions.

If I wanted to nitpick I could say that Hamner’s depiction of Renee is definitely one of the… whiter versions I’ve seen (since when are her eyes blue and not brown?), which wouldn’t be such a big deal if every single example they use in the back of the books of her history wasn’t darker than this comic. That being said, without giving too much away, anybody who is a stalwart shipper of a certain Renee pairing will think this entire comic is worth buying just for the last panel alone.