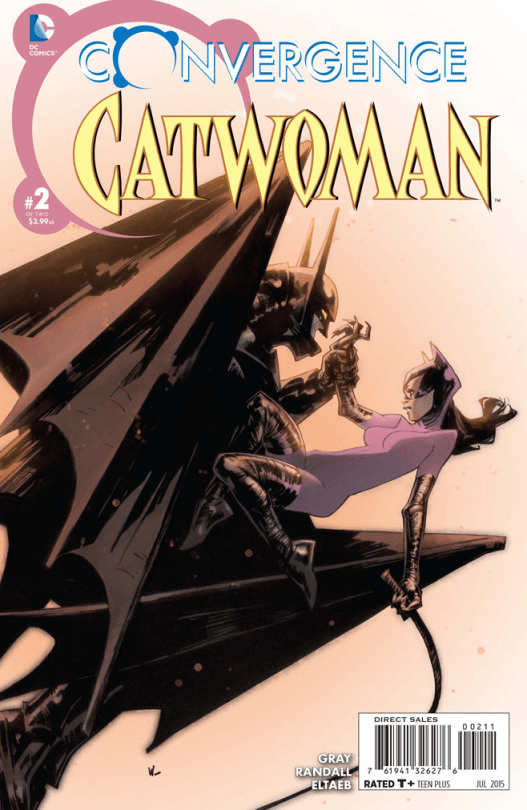 Right away I have to say again how much I really admire Claire Wendling’s cover art; whether it’s the contrast of the soft lighting with the large, imposing Batman or Catwoman’s pose that both boasts her feline flexibility while leaving her at least two kicks and a whip to the face as means of escape, it’s a lovely piece. I even like Selina’s girlishness, although I’ll admit the way her bodysuit is drawn is a tad bit headscratching.

What’s not headscatching for certain is the story inside. Pairing Kingdom Come Batman and 90’s Catwoman means not only a classic Bat vs Cat showdown, but one tinged with the advantages of technology vs youth. Once the heat of attraction cools off we see that heartfelt respect solidifies the relationship between these two entities, a respect that acknowledges entrenched differences yet appreciates the passion the other party gives to their cause. This leads to some really action-packed teamwork as both Catwoman and Batman hit each others’ weaknesses and then bolster each other’s strengths.

Speaking of strengths, Batman’s technology was without a doubt a highlight of reading this comic and I wish there was more space to see it in action. On the other hand, I would liked to have seen more of Selina’s trademark agility and whip skills put to use on someone other than throw away villians. However, it’s hard to complain when there’s none of the heavy monologuing bogging down the story as with the previous comic.

I’m not sure if issue #1 was written later or not, but the meat of Justin Gray’s story really lies in this comic; if you like having complete collections like me then go ahead and purchase #1 but you definitely don’t need it to enjoy this one. The preview at the end is for Gotham By Midnight, a comic that seems to be something like Buffy meets the GCPD (and no, Renee Montoya does not stake a vampire), so the full package is a great deal.