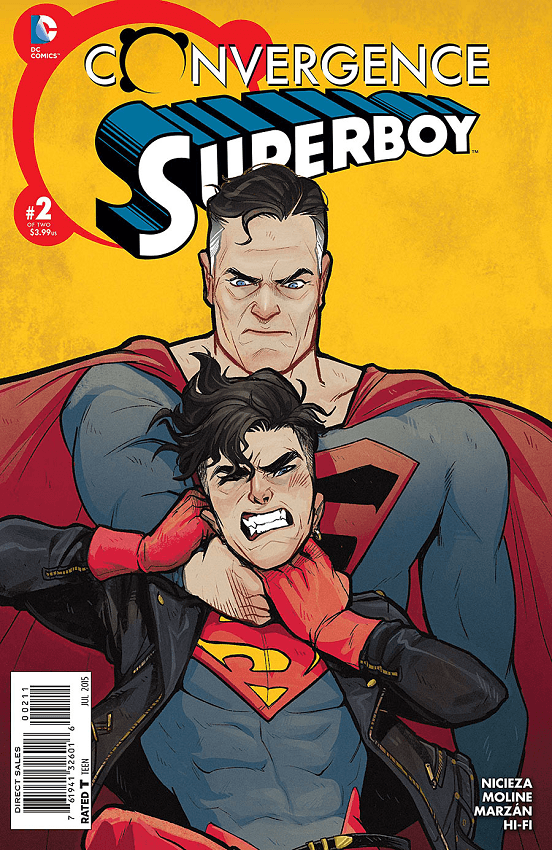 To quote the manager of my preferred comic store: Babs Tarr’s covers are just unf. In this case, I do mean that beyond the literal Conner being very attractive sort of way. Visually this cover is incredibly appealing as it toes the line between sketch and firmly drawn lines and between defined shadow and gradient. Conner’s facial expression also provides more action than some comics packed with entire teams, it’s that spot on.

One of the things that makes this comic stand out from its Convergence counterparts is its scale; where other titles have characters running around a small area of city or desert, Superman and Superboy are literally beating each other with entire airplanes. For me, this most matches the sense of grandeur DC was trying to evoke with this crossover. Karl Moline’s lineart definitely helps to highlight the spectacular nature of this encounter with vivid reactions and dynamic angles, all accentuated by a bold color palette. In fact, this comic almost has a picture book quality (and I mean that in the most complimentary way) in that you could easily grasp the story without ever reading a single word.

Fabian Nicieza once again really captures the essence of the characters beautifully, a feat that has actually proven challenging in the past given the sheer power both Superman and Superboy share. Better than mere action, however, is the addition of a few truly heartfelt scenes. While Conner mouths off sarcastically about Superman being his father, there’s a moment when Superman actually calls Superboy “son” but catches himself and you can practically hear Clark’s heart break as he attempts to reason with his clone. Another poignant scene comes with the arrival of a Superman fan favorite and a bitter-sweetness that can only happen when two timelines converge.

If it isn’t clear by now that #1 and 2 of Convergence: Superboy should already be on your shelf, I don’t know what else to tell you. Equal parts fun, action, and emotional, this is one of the few titles in this whole series I feel showcases why comics are still a living, breathing artform for all ages. Catch a glimpse of the Divergence Action Comics at the end, too! It won’t be what you’re expecting, trust me.