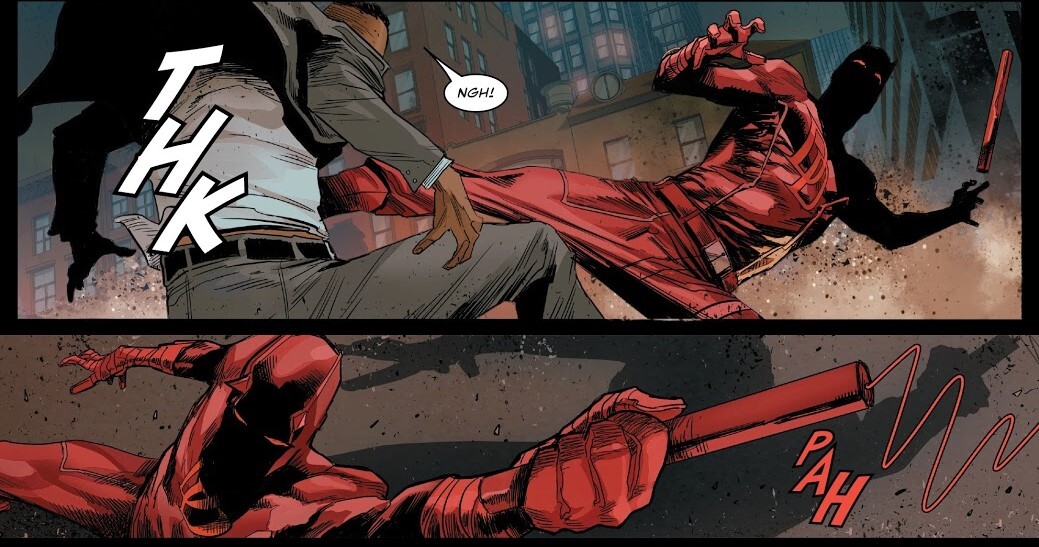 As a writer, I’ve always believed in the escapism aspect of comics. Social commentary is terrific and necessary but fiction is also important for mental breaks from the stresses of everyday life. With that in mind, I’ll admit I grew up with an affinity for cop dramas. I read endless novels about the laconic, lone wolf modern-day cowboys who didn’t take crap from anyone or the brainy Sherlock Holmes types that “see everything” but rarely draw a gun to win the day. And it never took away from the fact that in the real world, to quote Flavor Flav, “911 is a joke.”

Maybe it was a matter of needing a time out from the constant bombardment of news about law enforcement harming people that look like me. Perhaps it was a matter of denial in the midst of this war of attrition black people seem to be in against law enforcement. It’s hard to say. But I swore I was able to separate art from real life and just enjoy some old fashioned good guys vs. bad guys from time to time. And it even worked out for a time.

The first show I binged through when this quarantine stuff happened was Longmire, a Netflix show about an old school cowboy sheriff dispensing justice in Wyoming. There were almost no modern day politics to resolve here for me because there were virtually no black people in this version of Wyoming with the exception of the incomparable Charles S. Dutton (even his first line in the show was “Where are all the black people?”). Two weeks and five seasons later, I was fine.

Then, I dove back into comics I’d neglected recently and figured I’d start with my favorite superhero: Daredevil. To call me a Daredevil fan barely encompasses the delight I get from the Devil of Hell’s Kitchen handing out Ls like singles at the strip club. Honestly, I hadn’t picked up a DD comic in a couple of years and I like to jump in cold so I didn’t know what to expect. In a New York where his mortal nemesis, the Kingpin, is the mayor, Matt Murdock attempts to find his way back from serious injuries that leave him out of commission for a time.

After accidentally killing a guy (you read that right), the Man Without Fear ends up the target of a police manhunt lead by a newly transferred, well-meaning black cop with no love for vigilantism. It doesn’t take long for this to culminate in a fistfight between Daredevil and the black guy that riffs directly off of the end of Lethal Weapon (appropriately enough for this article, a movie about cops that are allowed to destroy three-fifths of Los Angeles to catch bad guys). Then, Spider-Man shows up and tells him, on behalf of the superhero community, that he’s done as a crimefighter.

To recap: Daredevil, demonstrably physically unfit to do his job, kills a guy…and only gets relieved from duty when someone decides that fighting a cop was the thing that was over the edge. Sounds very familiar.

By the way, he did a LOT of this while wearing the Punisher’s shirt, a murderous anti-hero whose trademark insignia has become popular among the police in real life.

At this point, I needed a time-out.

Now, to be completely fair before I go any further, this is not an indictment of Daredevil or Chip Zdarsky, the guy who wrote the one I read. This was definitely written before the events that led to the pushback against law enforcement reaching a fever pitch. As is the case with many of the major highlights of 2020 so far, I doubt anyone could have predicted having to produce content in such a volatile time. And Daredevil has always had a complicated, hot/cold relationship with the police for the majority of the character’s history, so yeah, it’s apparent that a lot of this could be taken as “par for the course” for a DD story.

But regardless of the intent, the impact is clear. At a time like this, these things hit differently.

This is a systemic issue that goes back far before the murders of George Floyd or Breonna Taylor. Every trope in our fiction is based in someone’s reality and at one point, I’m sure this included the idea that the police are some sacred brotherhood protecting the populace at all costs.

But that reality is no longer. For black people, it was never our reality in the first place. There is a reflex mechanism within the system of law enforcement that looks the other way when it’s clear the instruments of that system are susceptible to preconceived suspicions born of white supremacy.

When you understand this as well as Black people do, it’s hard to turn off. Impossible, really. No amount of escapism can immerse us so thoroughly that we forget it. There have been several cases of companies and networks sanitizing their product to eliminate the racially problematic elements of their products. Euthanizing shows like Live PD and COPS, much like recasting the title character on the Cleveland Show, these are categorically things that Black people did NOT ask for. When it comes to our humanity, there can be no consolation prizes or quick fixes. The lionization of law enforcement or, as I think of it, “Cop-aganda” is baked into every fiber of American pop culture and, therefore engraved to the collective consciousness. That’s not something that goes away overnight.

And although, in my difficulty getting through a Daredevil comic, I see where someone could think it’s necessary to cleanse our fiction of such things….ultimately these actions are not for Black people. Defunding, demilitarizing and reforming American policing from the ground…that would be for black people and even that would really only be a start. Just like cop-aganda goes back generations, so does Black anxiety about the police.

That’s why I inevitably came to the conclusion that the decision to consume content based on your social awareness is a completely personal decision. There’s no one way to cope with what’s happening out in the world as long as you do it with an understanding of the role certain tropes play in how society views the issues that haunt us.

Will I stop reading Daredevil comics? Probably not. Will I be reading them with a different awareness than I had before? Absolutely. Would I support someone else’s decision to stop reading them? One hundred percent.