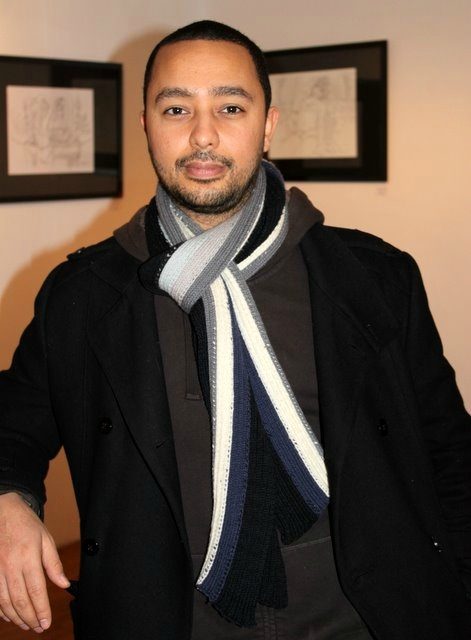 Alexandre Tefenkgi is a freelance French comic book artist whose artistry speaks for itself. Currently working on many Image projects, his latest endeavor is bringing the noir crime thriller, The Good Asian, to life.

BlackNerdProblems: What would your elevator pitch for why folks should read The Good Asian?

Alexandre Tefenkgi: They should read the first because it’s a good mystery book, good detective book, and it takes place really interesting era, and the way it’s written is really entertaining.

BNP: How did the collaboration process with your writer go? How were the script handoffs, and how did you translate some of his stuff from words to the page?

AT: Here we are in a really precise time period, so when I received the script, I also received a folder with Pornsak’s research and documentation about the architecture and the fashion of the time and a lot of what is going to be needed for the pages. Then, I extended that with my own research with Google and Pintrest and whatever I could find to help with the job.

BNP: What are some of the challenges of illustrating a noir comic as opposed to say like a sci-fi series like your other on-going series, Outpost Zero?

BNP: As someone who has read the first three issuse, I can definitely attest to the cinematic look of the book. What was the most difficult part of the book to produce?

AT: I would say that would be not to fall into cliches when you want to depict a certain community, specifically Asian faces. It could be easy to fall into what you see and reference, but it’s just an interpretation on other people’s minds. So, I wanted to have my own interpretation of how it should be styled.

BNP: What was the thing that excited you the most when you first started illustrating?

AT: The excitement of this noir project…It was a first for me. I was always interested in the detective, crime genre, and I thought it was a great opportunity to have my own take on it and create something that is my own and could match what Pornsak wrote. I wanted to also find the good mix with the colors. You saw the pages, the colors are awesome. The mix between the black and the inking and colors is a perfect match for me.

BNP: How many iterations did it take to find the right balance of the atmosphere?

AT: Okay, so at first, I added on the page tones, like the ones you found in mangas you know? Shades of grey and I put that on top of the black and I thought “Yeah, the render was good.” But when Lee put the colors on it, I thought “maybe I don’t need this extra layer” and I took it off and I think it looks great. It didn’t add anything, so might as well take it off.

BNP: So you primarily work in digital?

AT: Yeah, I start the storyboarding on paper, and then bring it on to the computer and finalize it in MangaStudio.

BNP: What do you hope readers will feel after reading the first couple of issues?

AT: I think… I hope they feel a sense of mystery and suspense and a sense that the characters feel authentic and not like cardboard boxes. I want them emotionally engaged and interested in the story.

BNP: What would you say your favorite moment from the first issue was?

BNP: For my final question, for these types of interviews, I like asking what’s a piece of media you’ve been enjoying recently. So, what’s been on your radar?

AT: I discovered a series on Netflix, Midnight Diner: Tokyo Stories. It’s short stories about a small restaurant in Tokyo. The customers gather in the evening to eat in the restaurant and tell their stories. And it’s small stories about the Japanese population that seem to have no link, but at the end of the series you have this global view of the customs and the way the Japanese see life.

The Good Asian releases in print and digital in early May.