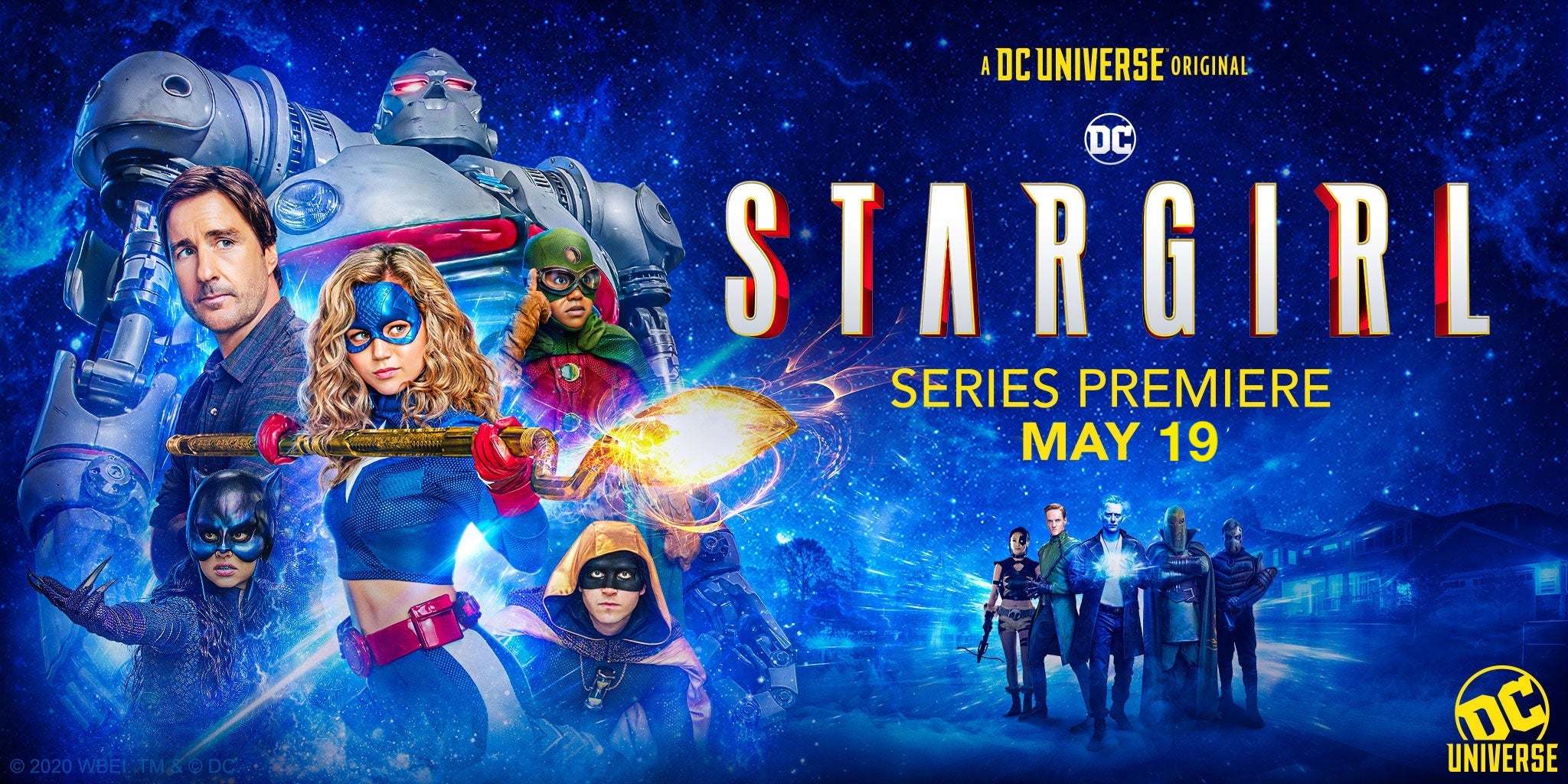 Stargirl is the evolution of the CW we have been waiting for, it just took what – 10 years and 6 shows and like 8 movies to put together the formula. Stargirl is by no means perfect, it has its clear Black Nerd Problems and hopefully the rest of the season will correct those. But here’s a take on the brand-new era of the CW and DC television.

We bust through the gate with some fantastic camera work and special effects – green GOT fire and Joel Mchale?? Yes, Joel McHale is the superhero Starman, and there is a serious ruckus happening in these first moments.

Magical people are being thrown around by other magical people and although I am not being eloquent in that description of the characters, I am seriously impressed! Luke Wilson is our POV in this who is obviously connected to what we see as the “good guys,” but they are really taking a beating. Without giving anything further away, it is a great beginning to this unsuspecting new series. The show begins in medias res as they always do – 10 years ago.

We quickly get caught up and introduced to each character as they are flying through the air in this fight, excuse me – getting thrown about in the air during this fight. Pat is literally calling out their names like it’s role call (wink). For anyone who loves Stargirl and the characters of the Justice Society of America probably has glassy anime eyes right now. I must mention that I am approaching this series as a nerd adjacent lover of DC by way of television and movies (rather than the strict comic book or graphic novel deets.) I am well versed in CW accoutrement and the DC animated world, so this will be a tv centered take on the first three episodes.

Back to the show. After this pretty finite brawl, we skip forward to possibly the present…I assume the present but Luke Wilson’s character Pat Dugan (or as I like to call him Patches O’houlihan) has a pension for the antique. He drives an antique flashy car and uses a landline and I mean like LANDLINE like the first edition after the rotary phone went out of style. Cough cough – a rotary phone is a physical phone in which you had to wind each number in a circle to dial.

As mentioned, the exposition is strong with this one. Each moment is a tell – not show, which is not foreign for the CW, and in this case for some reason it isn’t a dealbreaker. It is quite possibly due to the casting with Luke Wilson as our Pat Dugan aka (stripey) and old school sidekick, and Brec Bassinger known for work on Nickelodeon in Bella and the Bulldogs plays our Stargirl, Courtney Whitmore. Courtney is animated, reactionary, talented and from seeing Stargirl in animated movies, a great fit! Her Banter with Luke Wilson and chemistry with mother character Barbara Whitmore (Amy Smart, Just Friends) is a match! The casting Directors really swiped right on their headshots and they are keepers.

The CW is not known for their phenomenal dialogue, so I was ready for anything but this ish carries! Usually it takes an exceptional actor like Wentworth Miller (Captain Cold, Legends of Tomorrow) to deliver the cornball lines, but this script was well balanced, pairing the corny with the right amount of suspense and captivating story. Stargirl feels like they are finally getting that special sauce right, bringing the excellent form of storytelling from their animated works to the live action world in a much more seamless way than before. Those not so background characters (who will most definitely be important as the series progresses) have drive-by lines almost identical to the cartoon films. You know – those moments during the class science fair or trip to the museum where some kids says something mad loud that points out something arbitrary but.. Oh ho ho – look out, it will be important later.

It is not without its issues of course. Black Nerd problem number 1-4 = seemingly subservient characters of color. We meet the plastics the first day at Courtney (Stargirl’s) new school in Nebraska. One of these popular girls is a brown girl dressed in pink along with a white girl with 2000s Live Action X-Men Rogue white striped hair. The head of cheerleading “Cindy Burman” played by Meg DeLacy is ready to recruit Courtney as her “2nd,” while the brown girl gripes about being her 2nd already. That’s a strike in my book. The cool girl sidekick character “Jenny Williams” played by Ashley Winfrey follows Cindy as they storm off somewhat forlorn hoping she is still her “2nd.” Honestly, I’d rather the black girl be the bully plastics leader – even though that would have its own connotations as well…

Next, the lunchroom scene – no spoilers or anything, basically Stargirl confronts a bully at lunch and food goes flying. But the food doesn’t go flying all over the bully – No, instead it flies all over the brown woman serving lunch who is left cleaning up the floor as both bully and Stargirl just walk away… WTH! Ok, I get the bully not caring… but Stargirl doesn’t stop to help? And why the lunch lady gotta be black?? Is it cuz it’s Nebraska? This continues with the “losers” table and the nerdy black girl calling herself a loser albeit she is unbothered by it. I’m not getting on this character at all to be honest. They are played by actor Anjelika Washington and seems genuinely sweet and loving, she is adorable! It seems like they are trying to foreshadow her involvement in the JSA, you just wish that she would be the main badass superhero – we’ll see.

Then the other “loser” character as they have been presented is a Latinx actor who everyone keeps calling a Sl*t…SMH. I know it sounds like nitpicking, but these were noticeable moments in the eyes of a Blerd and an actor/writer one at that. I believe and hope all of this is happening for the sake of the story. That all the heavy-handed socio-political elements will have some pay off. All the black and brown people can’t be outcast loners, sidekicks, maids or used by the white people. Some small fraction of that is accurate to the real world – but we’re in a fictional story where a staff comes alive acting like the magic carpet and all, and befriending a crafty young person… I think we can be innovative about our characters. This goes for the obligatory reference to twerking used in the show as well… Is that just a thing? Is that just how white people talk now? Confusion.

After the first three episodes though, I am anxious to see if they rectify the few Black Nerd Problems and keep on this beginning high note. Because those issues aside (although were noteworthy), I am quite excited for the show.

Fantastic villains albeit the character names (which can’t be helped – authenticity you know), they are brutal. If this is for kids this is the most PG18 kid’s program ever. The threats the main villain makes and the things he does – well I never! (As I clutch my pearls.) They play up the ever so popular antihero trope with the main villain wanting to “change the world,” so it can be safe for his son and all children (skeptical side eye..) At the same time throwing the modern political flavor with their “New America Project” (MAGA anyone?)

It is important to note that the CW revealed, and this is SPOILERS if you haven’t seen Crisis on Infinite Earths (or are not familiar with Stargirl history) that Stargirl is on a different earth. I am interested in seeing what happens next and how they will form this Young Justice… sorry – Young Justice Society of America. There are interesting song choices, engaging storylines and plot, with captivating characters, powers, and magic.

Watch Stargirl when it airs May 19th on the CW.