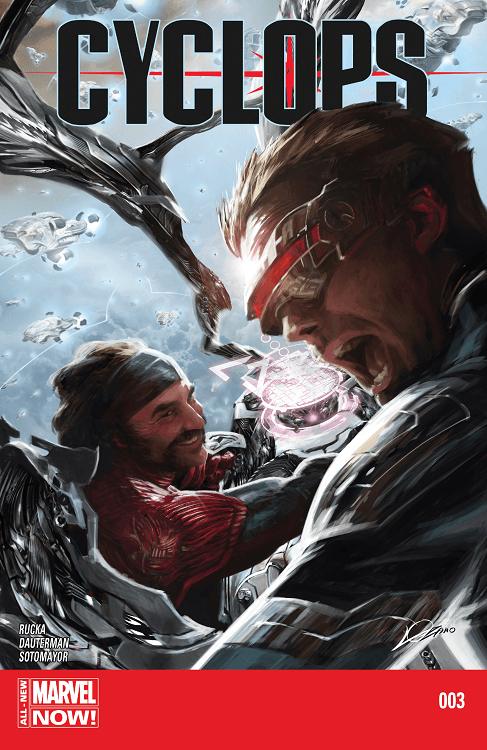 If you thought that when Cyclops got his own continuing series, it would be a standard solo book with a member of the X-Men having typical X-Men adventures against familiar X-Men enemies, then you might have been dead wrong. And that’s a really good thing. This story is not only removed from any current X-Men story lines from a location standpoint, but it is different than any kind of X-Men story. We’re not getting a re-imagining of the leader of the X-men here, we’re getting the character study of Scott Summers, the 16 year old boy who knows what his future held and really disliked it. The 16-year old part is important. So often, we get our heroes with these super powers, that no matter what age they are, it’s hard for them to seem like teenagers or young adults. Rucka has made that a focus with this book so far, taking Scott (and us) through his awkward adolescence and growing into a young man.

This issue focuses on the true story behind Corsair’s seemingly “substance abuse” as he tells Scott why he needs the injections while revealing a little family history that I’m sure will become significant. I have no doubt that there will be a lot of action as this series continues, but this installment throttled back and just gave us a top down view of the father-son relationship between Scott and his father and it worked well.

Rucka continues to go “left” when it comes to telling the story of one of the original X-Men. Tight scripting and character development rule the day in this issue and its refreshing to see a character with such a rich cannon get a “do-over” of sorts in this book.