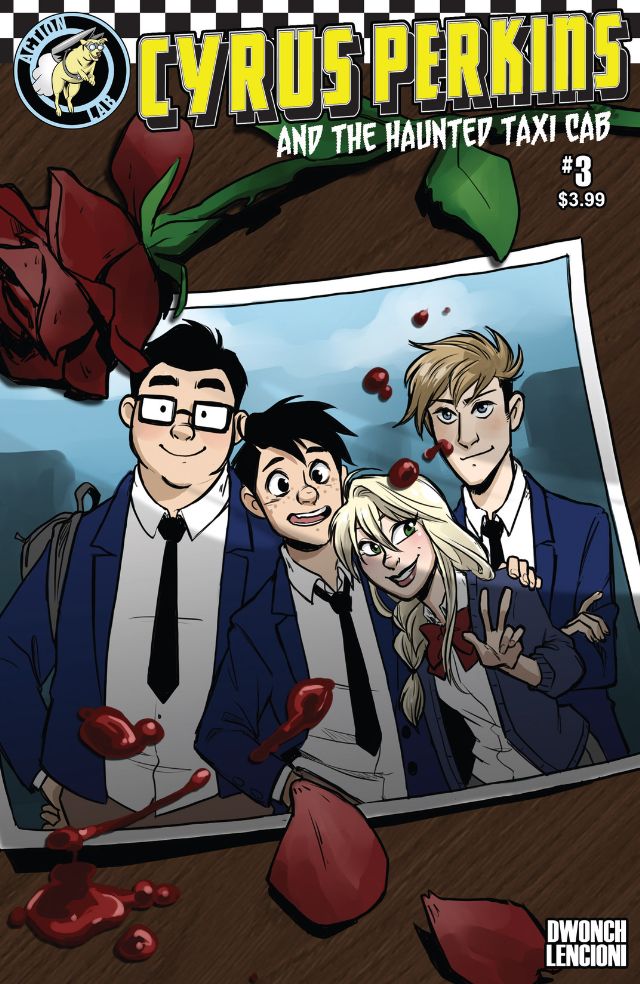 I have to say how much I appreciate the opening of each comic, each issue opens like a crime noir themed television show (which IS one of the genres of the comic, by the way). That wasn’t lost on me in previous issues, I just want to acknowledge it in the grand scheme of things visually as the story continues.

Cyrus Perkins is still on the case to finding who killed Micheal and find ultimately find closure for the both of them with Mike in tow via the taxi.  On his amateur detective grind he’s talked to Mike’s mom, now he’s attempting to get answers from other people close to our draling ghost boy… his friends. What’s really intriuging here is how people continue to react to Cyrus looking for answers given his connection as the last person Mikey talked to before passing away and also as a person who is obviously not a detective. Well, not an offical detective, that is. WELP. Cyrus really gets a taste of nonrelated work  stress here in this issue when making some serious connections to the case which erases some of the amnesia cloud ghost boy Mike been hovering in about his past undead life.

Did someone say DRAMA-BOMB? THIS. ISSUE. GETS. REAL. It looks like the detective work has been paying off because instead of waiting to be found by Cyrus, some folks who were hopefully going to be found via clues come looking for our fave compassionate cabbie and he’s ready to let someone catch those hands. Come for the ghost and cab, but stay for the action!

As for the art, there are some really great pages drawn here where the emotion of the scene comes across really well. Especially where Cyrus is confronted by certain characters and Mikey gets glimpses or clues of who these people were to him in his former life. It just may be a tearjerker. Heads up. Looks like next issue will conclude the series!

9.5 Ghostly Teenage Revelations out of 10