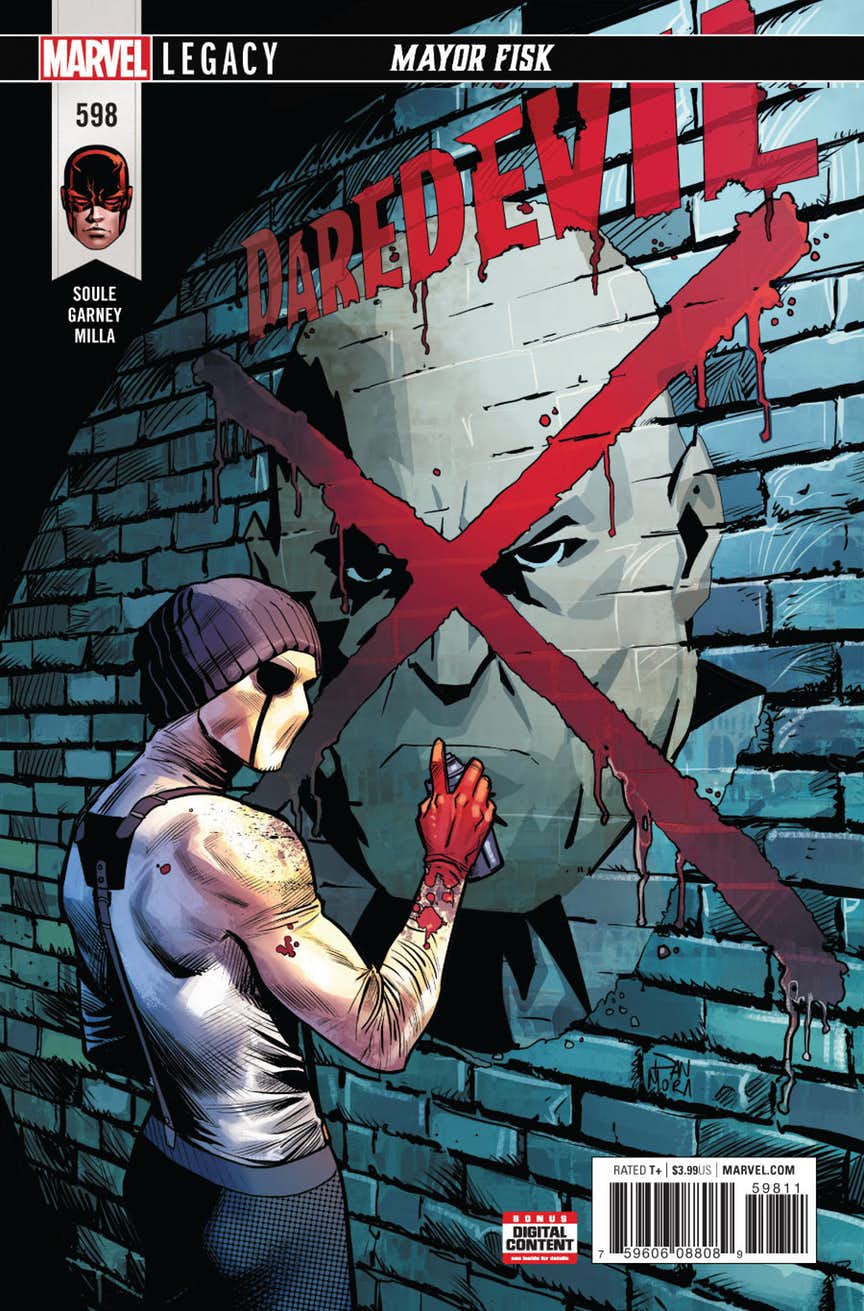 This week brings us Daredevil #598 written by Charles Soule and drawn by Ron Garney. We continue the term of Mayor Wilson Fisk aka The Kingpin. The honorable mayor’s plans to crack down on New York City’s superheroes have been interrupted by the escaped super villain, Muse. The faceless dissident has taken to vandalizing government buildings with superhero-inspired art, opposing Mayor Fisk’s hardline stance against them. Matt Murdock, the newly appointed deputy mayor and veteran hero known as Daredevil, has his work cut out for him. He has to utilize his legal expertise as well as his heroic gifts to push against Mayor Fisk’s administration and Muse’s dangerous presence.

The past couple issues of Daredevil have been rough art-wise. I was excited to learn that a new artist was continuing the book and Mr. Garney did not disappoint. His style in this book can be described (by someone with zero artistic training or expertise) as “liney”. The character faces have this design reminiscent of a rough pencil sketch. The close-ups in particular highlight this artistic choice. The use of light is incredible in this book. In City Hall, dark, shaded areas contrast beautifully with the brightness through the windows. The shadowy alleys of New York just sing and give life to the cityscape. With the huge milestone issue, #600 coming up I’m ecstatic that Garney has joined Charles Soule on this book.

Speaking of Soule, this story continues to impress me. Making the Kingpin into the mayor was a genius idea on its own. To bring Muse into the story put it over the top. It is so rare to get new, moving characters in comics. This is especially true for villains. I don’t remember the last time a new villain terrified and interested me as much as Muse. His methods are terrifying and his motivations are mysterious. And then there’s his design. Dripping eye sockets and a beanie. I look forward to seeing what the iconic rivalry between Murdock and Fisk does when a chaotic character like Muse is thrown into the mix.

9 out of 10 Sinister Selfies