Deadman Wonderland was an anime that had its original run in 2011 and then a few years later it was part of Toonami’s revival schedule and had good ratings especially considering how late it aired.

So if you don’t know what this show was about, I’ll lay it down for you. Ten years before the story starts there was a massive cataclysmic event that sunk three-quarters of the city of Tokyo into the ocean. Ganta a regular, extremely non-threatening looking dude is in class chilling when all of a sudden this scary ass dude with a smile on his face and clothed in crimson armor covered in blood comes into Ganta’s classroom and kills the entire class except for him. He lets Ganta survive after putting a red crystal shard in his chest.

A few days after the Massacre, Ganta is taken to an extremely fair court where he is found guilty of murdering his class. He’s sentenced to Death at Deadman Wonderland which a prison/theme park hybrid.

When he arrives he has a collar put on him that is constantly injecting poison into his bloodstream which would kill him unless he eats a “candy” at least once every three days. The way you earn the candy is by performing for the audience in the games and surviving. Luckily, a weird but cute girl named Shiro helps Ganta out which creates a strange but enticing friendship. Ganta’s goal is to find the “Red Man” who murdered his class to clear his name in this prison.

He develops an ability to control and manipulate his blood and shoot it out of his hands. He has become one of the prison’s “Deadmen”, someone with a “Branches of Sin” which basically means they can do some cool ass shit. Ganta must learn to use his powers and survive Deadman Wonderland all while uncovering the mystery of the Red Man before he becomes a prisoner forever.

So sounds cool right? Sounds like some bomb ass shit right? Well it should’ve been except it was only 12 episodes and an OVA. Now I’m not saying it wasn’t extremely entertaining and enjoyable because it was and that’s why it’s a shame it only had one season. The show was some bomb ass shit but it could’ve been more…bomber…shit.

You know what I mean. This show felt rushed and unfinished (because the anime ended at around the halfway point of the manga or a little before it) and even as a rushed show It was pretty great with some memorable moments. The manga had its full run and it was better than the anime which is understandable because it had more time to develop the story than the anime did. 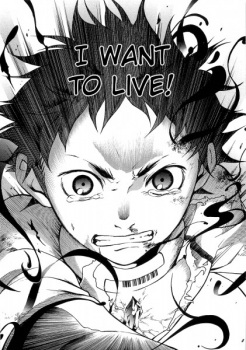 Deadman Wonderland was one of those shows that had everyone who saw it on Toonami wanting more but alas, it was too late. Due to bad sales and ratings in Japan Deadman Wonderland will remain a one season pony…at least until someone finds the Dragon Balls and wishes for another season. I recommend this show, but be warned the ending will make you want more and just be ready for that eventual swan song you’ll be singing when you realize that there is no more left. At least not for the anime but you can read the manga and you’ll be fine.

The anime also has one of the best opening songs in recent years.

The anime is available on Hulu and the manga can be found in most book stores that carry manga. Enjoy this show because, for what it is, it’s great and I appreciate it even though I still wish there was more to it. The fights are good, the story is good, the characters are good but another season, even just a few more episodes might have made it great. Let’s all enjoy what we got though. Oh, don’t forget to eat your candy while you’re in Deadman Wonderland!

PS. DON’T GOOGLE ANYTHING ABOUT “THE RED MAN” IF YOU DON’T WANT ANYTHING ABOUT THE PLOT TO BE SPOILED FOR YOU! I CAN’T STRESS THIS ENOUGH. Ahem, that is all.