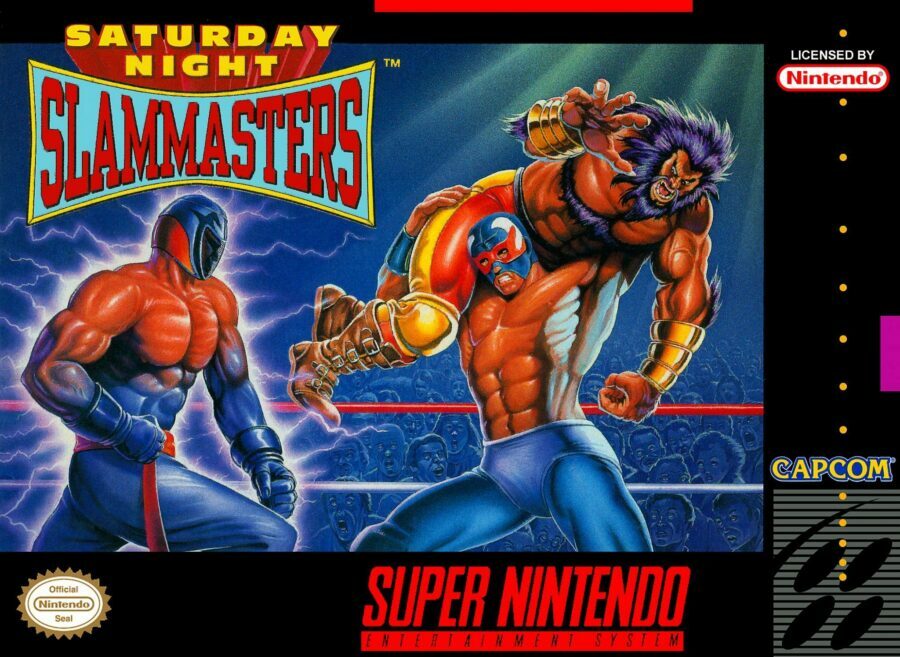 So, I play Capcom games. A lot. And not JUST Monster Hunter, either! I have been a lifelong fan of your company. According to stories, the first thing my father did after I was born was play Ghouls ‘n’ Ghosts in the hospital room, a game that to this day he claims to have never beaten.

I love Mega Man. I love Street Fighter. I love Devil May Cry. And I would love to direct your attention to a game you have clearly forgotten all about: Saturday Night Slam Masters.

Look, I get it. You’re busy making DLC and Resident Evil sequels and whatever it is Remember Me was. But I think you are missing out on some SERIOUS untapped potential here.

To say that SNSM was ahead of its time would be an understatement of the highest degree. The combination of fighting game controls, 3D movement, and anime influences would inspire everything from Power Stone to Jump Force. And it’s easy to see why, with Hara-san of Fist of the North Star fame being the artist behind the characters.

Today, anime has a bigger influence than ever on pop culture, in the east and the west. Wrestling has always been a vibrant part of that culture. Kinnikuman has existed as far back as the 70’s, and there’s not a millennial adult alive who hasn’t had a fever dream about its one western adaptation, Ultimate Muscle. There are also the various anime based on or that inspired masked lucha libre style wrestlers such as the Great Muta, Jushin Thunder Liger, and Tiger Mask.

In fact, Tiger Mask is an anime that still sees airtime in Japan, supplemented by a sequel series years after the original run of the anime in the 1980’s.

The “W” Stands for “What a Comeback!”

Tiger Mask W takes advantage of the miraculous and meteoric revival of pro wrestling in Japan in the mid-2010s. After the folding of the first iteration of Pro Wrestling NOAH, and the recovery from that rivalry that took New Japan Pro Wrestling years, Japanese pro wrestling saw a resurgence starting circa 2013.

The Capcom of it All

Of course, Capcom, you know all this – I know you know, because your finger has been on the pulse of Japanese culture for years, with puro being no exception. Every iteration of your flagship series, Street Fighter, features some pro wrestler. Maybe two. We got Zangief, Alex, Rainbow Mika, Mike Haggar, need I go on? You can’t fool me. I know the squared circle is in your blood.

That being said, back to Tiger Mask. What this newest anime did that was much less prominent than those before is that it seamlessly combined an entire real-life organization into its mythos. After a tragedy drives two friends apart, one of them joins the New Japan roster as the titular masked feline. The narrative builds from there and creates a whole sprawling story of revenge, friendship, teamwork, and how our actions impact our community. It’s truly a brilliant and quick watch, at 38 episodes.

What it shows is that by combining real-life elements into fictional work and making them a major part of the narrative, we CAN produce something both entertaining and with mainstream appeal. I think, if I’m putting myself in your shareholders’ shoes, the issue with Slam Masters is that it can be as good as anything, but if it doesn’t get people’s attention, it doesn’t get people’s money. And I get that if it don’t make dollars. . .

So Where Do We Go From Here?

I’m certain, at this point, someone in a suit is saying something about “potential next steps”. Do not worry, my friends. I got you.

Let’s consider the case of Fire Pro Wrestling World. What started out as a Steam Greenlight project became a phenomenon on the backs of custom content. The vast majority of that content were custom characters created in the likeness of mainstream wrestling stars – primarily, as a heavily Japanese influenced game, these were New Japan stars. This garnered so much attention that when the game made the jump to consoles, it did so with a legitimately licensed New Japan roster and even advertisements from NJPW superstars such as Kota Ibushi and current AEW world champion Kenny Omega.

Now, I’m not saying that you need to put out a Greenlight gamble and introduce custom characters in your game that did not have any. You have seen plenty of success without that mechanic in your greatest titles and I think going to that drawing board now would be a waste of time. What I am saying is: Tiger Mask W was a solid 8/10, with great animation that any animation team could take and run with. It’s well paced and an easy viewing if, say, a writing and art team needed ideas.

What I’m also saying is that the forbidden door is wide open, my dudes and dudettes and dudexes. You call up Gedo and Jado now and you just might get an answer. And if you were to get those guys, your Naitos and Ishiis and Okadas and Robinsons and Finlays in your game in that good Capcom crisp visual, well, I’ll let my friend Dwayne say it for me:

Fire Pro Wrestling World: 8/10 – difficult but rewarding gameplay system; art style is retro and has all the ups and downs to match

Saturday Night Slam Masters Reboot: Well I don’t know but I’d sure in the Hell like to find out.

What do you think? If enough of us get together can we get this in front of the right people???