Oh, I already did the one-sentence review bit for Moana so it’d be tacky to do it again? Okay, bet. Let me just wipe the tears out of my eyes and get to work.

Jingle Jangle is a colorful, catchy, touching film and the spiritual successor to the network musicals of the 80s and 90s like NBC’s 1989 Polly—directed by Debbie Allen and also starring Phylicia Rashad—and ABC/Disney’s 1997 Cinderella—produced by and featuring Whitney Houston. And we have been due another of these for a long, long time. Charles Dickens could never.

Who All Gon Be There?

David E. Talbert takes the helm as both writer and director and guides the ship well. The movie’s heartfelt core message touches on loss, belief, guilt, forgiveness, math, and magic. It seems like a lot to pack into one film, more heartstrings than can be tugged without fraying, but Jingle Jangle manages to hold the delicate balance buoyed by charm and holiday vibes. It flows along like the classic Hollywood movie musicals of yore. A Singin’ in the Rain with way more people of color and no twenty-minute dream ballet.

The emotional journey is packed but solid, resolving satisfyingly for everyone—especially our plucky, precocious heroine and the delightfully charming mail carrier. A big part of that is probably due to the masterful cast assembled for this film, particularly said plucky heroine Journey Jangle—played brilliantly by Broadway veteran Madalen Mills. But if you want a role knocked out of the park, everyone knows to bet your money on seasoned professionals Forest Whitaker, Anika Noni Rose, and Keegan-Michael Key. They just don’t miss as the grieving inventor Jeronicus Jangle, his estranged daughter Jessica, and the greedy (and gullible) Gustafson. And newcomer Kieron L. Dyer is sure to charm your socks off as the anxious and excitable Edison.

That New New for Your Holiday Playlists

Two quick things about the music of Jingle Jangle. One, it’s full of bops. But of course it is when you have industry pros like John Legend and Phillip Lawrence churning out your bangers. Two, not everyone is a singer, but everyone sounds fantastic.

We’ve got Grammy winner Ricky Martin, Broadway royalty Anika Noni Rose, and West End queens Lisa Davina Phillip and Sharon Rose right alongside less-musical actors Keegan-Michael Key and Forest Whitaker. And while the latter two aren’t bringing the house down with powerhouse vocals, the songwriters were skilled—and kind—enough to give them songs that showcased their abilities to their best. Also, gospel chords. All the gospel chords my church choir-raised ears could need or want. Bless.

Afro-Victorian Realness with a Dash of Steampunk

Cinematographer Remi Adefarasin treats the eye to sweeping wide shots of the gorgeous Cobbleton village and Ashley Wallen’s fantastic choreography. Although some scenes play a little darker than I’d like for such a visually rich film, Michael Wilkinson’s costumes are colorful and fun blending Ankara prints beautifully with Victorian silhouettes. And Sharon Martin masterfully gives us some of—if not Thee—best wigs and make-up we’ve seen on Black performers. But when you know, you know. The automaton storytelling animations interspersed throughout are dynamic enough to hold your attention while dialing up the magical holiday vibes.

Despite being a little early for some of us Not-Til-After-Thanksgiving holiday spirit purists, Jingle Jangle is here to deliver us into the season of cheer. It’s a beautiful love story to holiday stories, imagination, ingenuity, forgiveness, and families. Stream it with your other holiday classics, cue it up for a watch party with loved ones near and far, learn the choreography to show your grandma over Facetime. However, you chose to do it, you should definitely make Jingle Jangle part of your holidays this year. You won’t regret it. 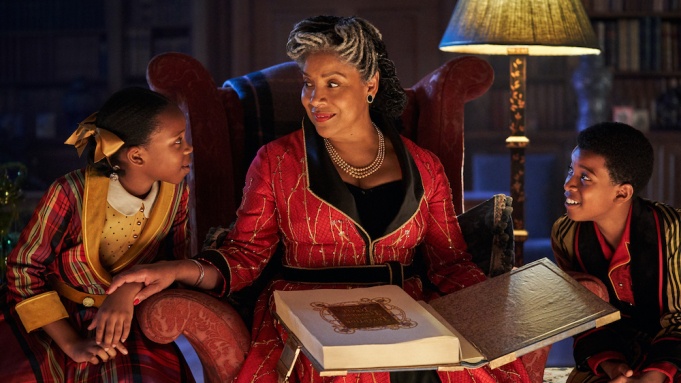