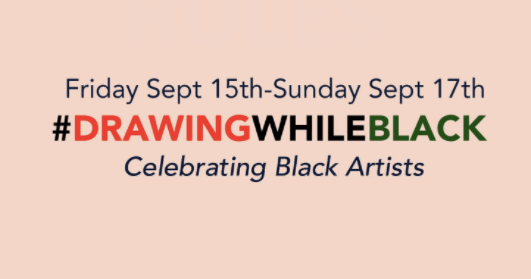 Imagine a place where every modern day Black artistic genius — from cartoonists to jewelry makers to painters and more — could gather from across the diaspora simultaneously and share their Black AF artwork. Thanks to #DrawingWhileBlack founder and artist Annabelle “Abelle”” Hayford that place is real and now just a tap or click away. Believe me, as a reviewer who has scoured the internet with special search terms, pursued the trail of favorite artists’ favorite artists, and dug through list after list after list, #DrawingWhileBlack feels like a veritable Wakanda of visual Vibranium. It also turns out the thoughts behind this great new digital gallery space are just as good. This past weekend while attending Small Press Expo in Bethesda, Maryland I was fortunate enough to sit down with Annabelle to talk about the inspiration behind your new favorite hashtag (and source of your new lit avatar). 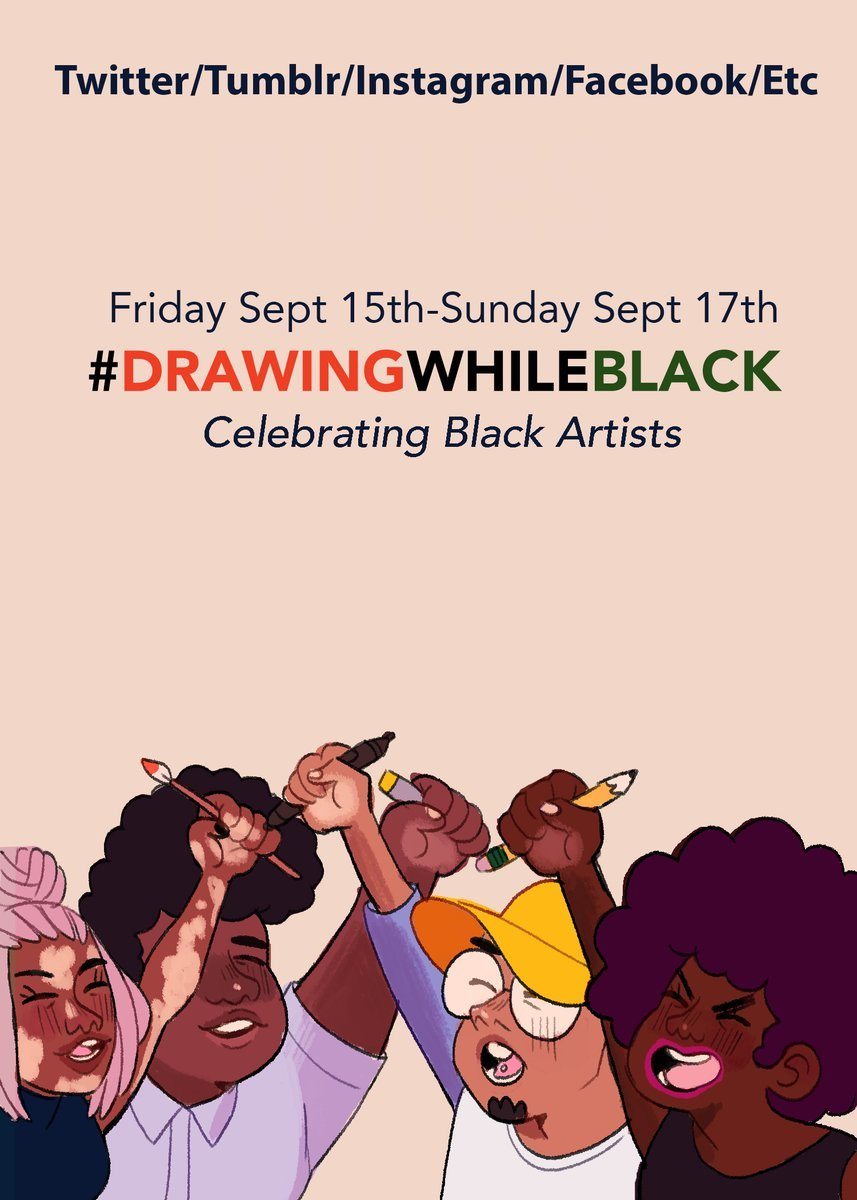 Black Nerd Problems: First tell us a little bit about yourself.
Annabelle “Abelle” Hayford: I’m 19 and a first generation Ghanaian studying art at Maryland Institute College of Art (MICA). I’ve wanted to be an artist since I was little; I’m hard headed about being an artist to the point where my parents gave up dissuading me.

BNP: What inspired the hashtag? Why this weekend in particular?
A: There’s a lot of things. One of the big inspirations was how #VisibleWomen and Black Out* highlight people who are often invisible in the art community where a cis white male is assumed to be successful. For my own reasons I wanted to have an archive to recommend. People will say to me, “I’m having a hard time with my parents. Can you show me successful Black artists?” And there’s so many, you just need to highlight them, basically.

I was originally going to do it next weekend; I planned it last month right after #VisibleWomen but I knew SPX (Small Press Expo) was happening, so it was good promo for artists tabling.

BNP: The language of the hashtag invokes the common phrase “driving while Black” in reference to racial profiling. Was this intentional?
A: It was mostly a play on words. I think #DrawingWhileBlack isn’t making light of the issue, it’s taking back the phrasing. I wanted it to be empowering.

BNP: Did your age impact the idea that folks might judge you for not being experienced enough?
A: I’m the type of person who, if I want to do something, I do it right now. I feel like this is the right time. Since no one was doing it I figured I would do it myself. 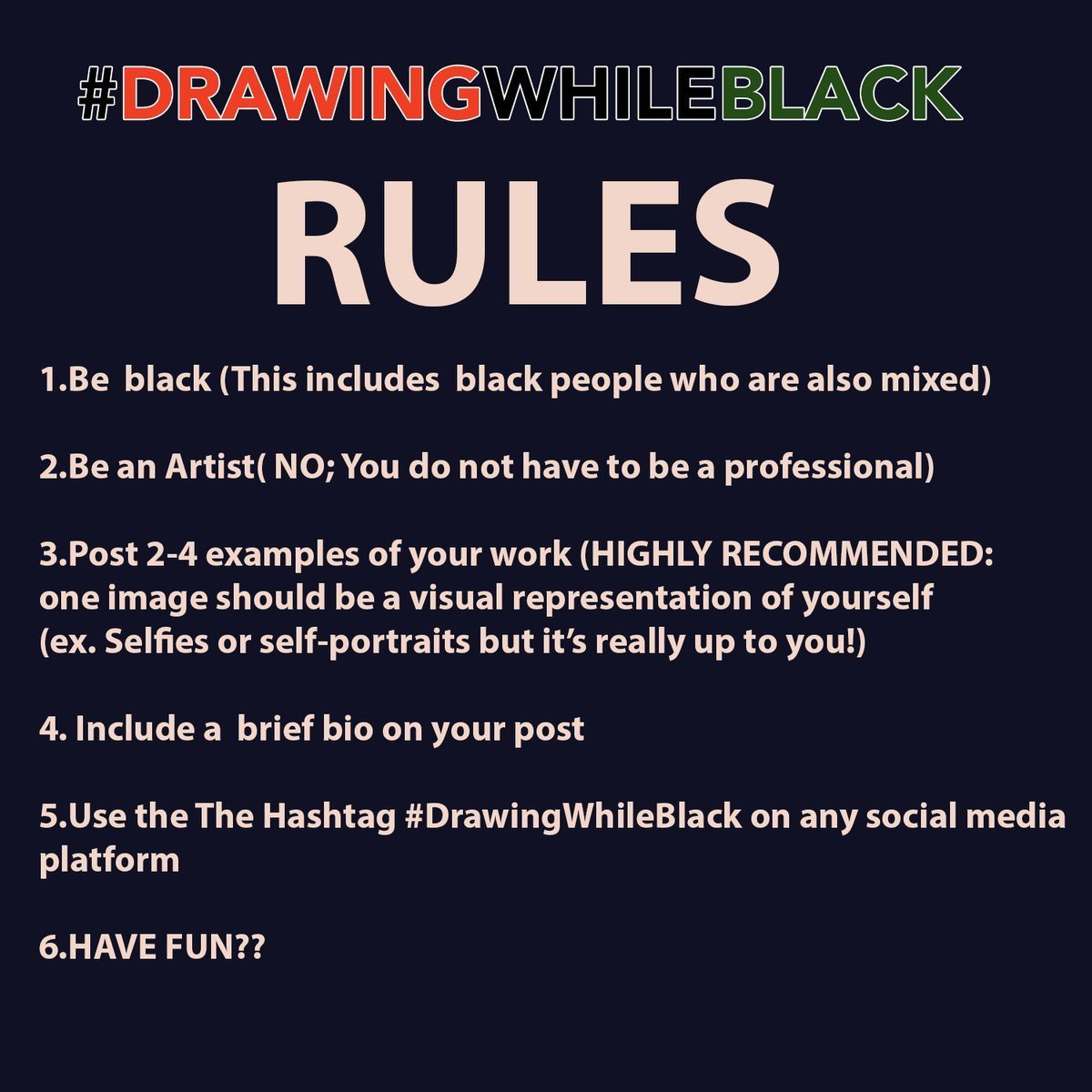 BNP: On your graphic you specify that the hashtag is also open to folks who are mixed. Why did you feel that was necessary?
A: I have a lot of mixed friends who feel like they’re not included. But if you identify with that part of you then you should be able to. A lot of people even asked my permission to join. At the end of the day we have a shared experience and I feel that they have a right to share their art, too.

BNP: What are your hopes for what Black artists will take from the hashtag? Black readers? Non-Black artists and readers?
A: One thing is having inspiration that you can relate to, and being able to have a big network if we’re trying to find jobs. I want to build a big art community of similar experiences, a group of people who understand your personal trials and joys. I’ve already been exposed to a lot of artists I didn’t know were Black.

I think with readers they should be open minded and maybe join the arts and be patrons. Basically just celebrate our culture in any way — maybe get inspired to make their own hashtags in STEM or whatever they’re interested in.

Non-Black people should be inspired instead of wondering why they’re not included. For white people I want them to self-reflect on the community and better spaces for us. There’s been backlash saying we’re separating ourselves when we’re just celebrating our selves. I want allies to support that.

hi my name is Annabelle✨I'm a first generation Ghanaian American animator and illustrator! I'm also the organizer of #drawingwhileblack ??? pic.twitter.com/mBVqbVPh8C

BNP: Typically in these boosting hashtags artists will use all of the pictures available to show their work. How important was it for artists to include a visual representation of themselves?
A: Personally I feel people can connect on a human level with them and recognize people in real life. Plus everyone’s cute!

BNP: Any final thoughts?
A: I’m really glad people are using it and supporting Black artists. I think I’m gonna do this next year. I also want to make an art book with all the artists who are in the tag. As of right now I’m just very happy that people are showing their art!

You can get your TL lit with the latest Black art by following the #DrawingWhileBlack hashtag and support Annabelle @sparklyfawn on all platforms and at their website http://annabellehayford.tumblr.com/.

*Note: #VisibleWomen was created by the company Milkfed and founded by comic creators Kelly Sue DeConnick and Matt Fraction. Black Out and more specifically #BlackOutDay was founded by Tumblr user T’von Green.