Here is the kind of Blerd I am: given the opportunity to sit on an airplane traveling between US coasts and watch any movie still in theaters at the time for no additional charge, I pulled up DreamWorks’ Home faster than you could say Avengers: Age of Ultron (I also chose a subtitled Doraemon: Nobita’s Space Heroes, but that’s a different story). Was the choice worth making? Well… yes and no.

Based on Adam Rex’s novel The True Meaning of Smekday, the film stars Rihanna as Gratuity “Tip” Tucci (ha!) and recounts the journey of one little girl finding her mother after an alien race called the Boov take over Earth in an attempt to hide from their enemies, the Gorg. The movie paces itself a little clumsily in the beginning since it seems eager to introduce us to Oh (voiced by The Big Bang Theory’s Jim Parsons) and his Boov culture while clearly feeling pressure to make sure the audience does not feel they’re being ripped off by a lack of Rihanna.

This is not to discount, however, the joy of watching the mechanics of an alien invasion at work. Too often Hollywood sci-fi gets bogged down in the cliches that A) all extraterrestrial lifeforms must be humanoid and find humans to be the most attractive and/or threatening creatures in the universe, and B) our technology and cultures should more or less match up perfectly, making the function of all every day objects apparent (of course we have porcelain toilets on our planet! All intelligent lifeforms arrive at this one specific design!). Watching Home challenges these notions by presenting a world where humans are regarded as cute but ultimately harmless and unexpected items are either eaten, re-purposed, or totally discarded into the sky by the Boov with human logic playing no part in these decisions.


[divider type=”space_thin”]
To answer the question on everyone’s mind: Rihanna is an okay voice actor. There were a couple of line reads that were flat or just short of believable, but in general her performance was decent and is often covered by Tip being such an incredible and fascinating character to watch. Aside from the fact that it’s still (unfortunately) mind blowing to watch a natural-haired Black girl take center stage in an animated production, Tip walks a fine line between naive determination and mature practicality that more fictional representations of children could take notes from. For instance, she defies the Children as Large Toddlers trope in that she’s got a healthy vocabulary, develops rational survival skills (turn off the lights when the aliens pass by your hiding place!), and hunts for obvious necessities like food, water, and transportation. At the same time, she’s not one of M. Night Shyamalan’s strange prodigy children who can’t use contractions and somehow know more than your average adult in all situations. We see Tip throw tantrums, grow impatient with Oh’s cowardice, and express insecurity at struggling to form friendships after being labelled “the nerd from Barbados” in her new school that way you would expect any 11-year-old to. In contrast, Oh and his Boov counterparts can get obnoxious very quickly, but it’s possible that the hammy delivery of Steve Martin as Captain Smek comes across a lot funnier to a younger audience.

The most obvious yet still surprising allegory of the whole movie is that it provides an easy explanation of colonialism and appropriation that a child (and honestly, some of these folks out here toting colorblindness) can understand: namely, don’t take things that don’t belong to you because they don’t belong to you. Rather than subtly slip this little message in and retreat, however, the film actually shows Oh apologizing for his preconceptions of humanity and actively urging his fellow Boov to think differently about the people they’ve displaced while trying to rectify the harm done. You know what that is? Good allyship. That alone should make school boards across the nation require this movie be shown on half days and whenever a substitute teacher is required. 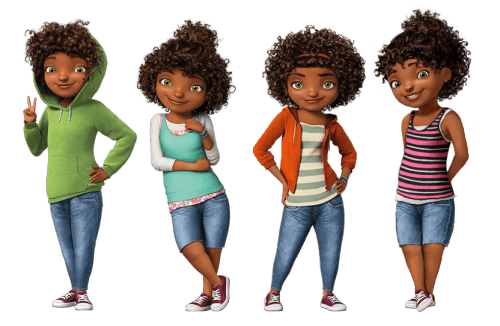 Overall, I can’t say Home is the groundbreaking artistic masterpiece of storytelling we all hoped it would be, but I also disagree with idea that every new thing starring a person of color has to be spectacular and perfect (…unless it’s Silk). There were a couple times where I struggled to suppress some tears at Tip’s vulnerability and Oh’s feelings of fear and rejection, and I even laughed at some unexpectedly humorous one-liners, so it’s a good watch for all ages. The representation of a well-rounded Black girl character speaks volumes and it makes me wish I had the chance to trade out the Disney princesses I grew up with for Tip. If there’s a little Blerd in your life, I highly recommend adding this movie to your collection. Hell, if there’s any children even tangentially in your life, find a way to get this movie to them. Trust me, the world will be a better place for it.