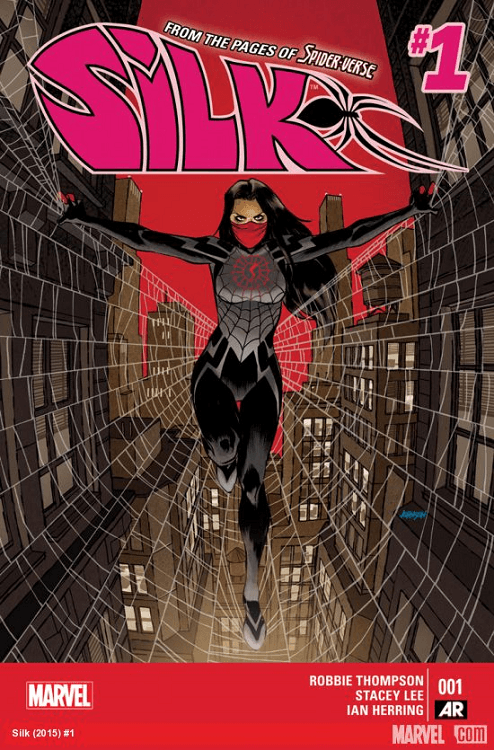 Happy Tết, everyone (aka Lunar New Year for all my non-Vietnamese readers)! As the resident Asian BNP staff member there are few ways I can think of better to ring in the new year than reading comics portraying a kickass Asian superheroine. …Or I guess I could just review Silk #1.

Let me say first that, in addition to Silk being an important new representative of the above, I drove back through snow-covered traffic at night to retrieve this comic because the shipment was delayed by a previous snowfall, so I really, really want to like Silk. I do! I want to like Silk despite the fact that she and Peter are face deep in the make outs before we even know much about her in Spider-Verse (because, as characters like Ben and Miles have proven, Peter has a history of immediately becoming attracted to people with spider powers. Oh, no, wait…). I want to like Silk despite the fact that she’s referred to as the Spider-Bride which is so obviously a title previously belonging to MJ. I even want to like Silk despite the fact that she doesn’t have a specific Asian ethnicity yet, probably so the creators can get away with dressing her in a Japanese ninja face mask but retain a name referencing a historically Chinese product and— okay, so maybe I already don’t like her that much. But I’m trying.

[divider type=”space_thin”]
I don’t know if writer Robbie Thompson has been reading a whole lot of Kamala Khan’s adventures lately or what, but Silk aka Cindy Moon’s fumbling both through superhero banter and daily interactions with her coworkers, while charming for a teenager, seem downright cringe-worthy when coming from a grown adult (and if Cindy was a week shy of eighteen when she was bitten and spent a decade of isolation in a bunker, then we’re talking nearly thirty here).

[divider type=”space_thin”]
Look, I get that she’s hasn’t been socially active for forever, but that still doesn’t make it pleasant to read. What could be an interesting series of fights with Silk slowly learning to gauge how her powers react against real world opponents (like how her webbing comes from her fingertips instead of her wrist, which could make for a really cool combat style) is instead panel after panel of  “Am I doing this superhero thing right?” Also, the whole working for J. Jonah Jameson and earning a living off of footage of her alter ego isn’t so much of a clever parallel as lazy writing. We’ve seen this. Just because she was bitten by the same spider does not mean Cindy has to be Peter (and if it sounds like I’m skipping around it’s because that’s exactly how the pacing of this book feels).

One positive thing that can be said for this comic, however, is Stacey Lee’s art; it’s got the ideal balance of realistic proportions and shading and yet a fun cartoony roundness that makes the book a visually enjoyable experience. Another is Cindy’s flashbacks with her family, specifically with her little brother helping her manage living in a strict household.

[divider type=”space_thin”]
It makes me wish that this story was told starting from her superpower origins and then flashing forward to her current incarnation, not the other way around. Of added interest is the peek into the life of crime boss Black Cat and a set up for her henchman named The Repairman (although if a female catsuit-wearing crime boss sounds familiar… it’s because it is).

While most of the comic feels like it’s finding its footing right along with Cindy, I will say the ending refocuses the story’s energy just enough to leave me intrigued about what answers are offered about her past in Silk #2. Cindy the person is far more interesting than Silk the adorkably clutzy superhero and I hope we see more of this side of her. It’s even early enough in this series that I’m willing to give a pass to some of the annoying cultural oversights I mentioned before. After all, it’s not like they’re going to make references to tentacle hentai or any— 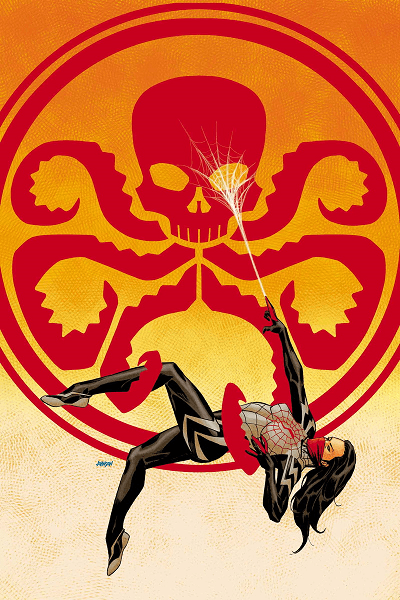