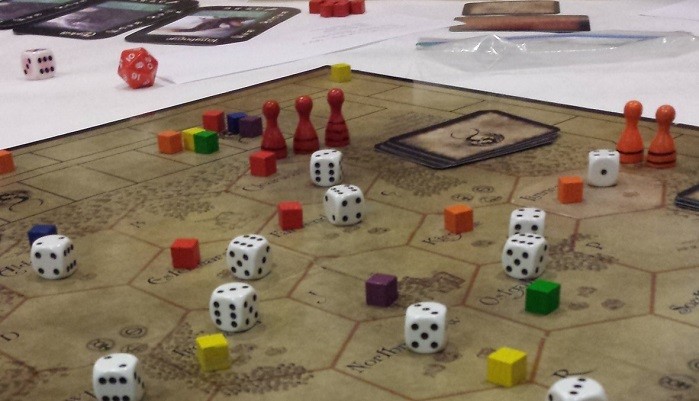 Nerds are a diverse group. Some of us are loners, enjoying our fandom at home with our collectibles and our consoles. Some of us like our nerdery in groups, geeking out with other fans online or at conventions. Conventions of all kinds are becoming a big part of the nerd experience. This President’s Day Weekend my ongoing attempt to catalog nerds where they congregate took me to DunDraCon, a gaming convention in San Francisco, CA. for 39 years. DunDraCon has been engaging and occupying gamers of all varieties — save for the electronic variety. This gaming convention is a place where you can play board games, collectible card games, tabletop role playing games, and even miniature wargames. This was my first gaming convention, so there was a lot I didn’t know. Here are some facts and some feels about the convention. DunDraCon takes full advantage of the long weekend, offering games from Friday afternoon to late on Sunday so you can still get home on Monday and do your laundry in time for work on Tuesday morning. The convention occupies an entire hotel, with each of the function rooms dedicated to a particular kind of gaming. Each game is given a time estimate, so you can schedule your fun hour-by-hour. This year, the con offered 58 board games that could be played. Some had scheduled times which allowed you to sign up to get in on the game, and some were available for open play; wherein you’d simply walk up to the table and take a seat at the advertised start time. People were playing everything from original Samurai Swords to the latest Lords of Waterdeep expansions.

There were 78 different roleplaying games played, mostly Dungeons & Dragons and its variations, but there were some more obscure games featured as well, such as All Flesh Must Be Eaten, a zombie survival RPG. The roleplaying games were all on a sign-up basis so the Gamemaster could prepare characters and plots accordingly.

One large room was dedicated to miniatures wargamming, both fantasy-style like Warhammer 40k, Lord of the Rings; and historical re-enactments of period battles like Roman times or World War I. Another area was set aside for wargamming without painted miniatures, so the barrier to play was lower. There was also a space for seminars where people talked about different issues of interest to gamers, from good Gamemaster techniques to how to design and market your own game.

Between games you may opt to go buy more games either in the Dealer’s Room or the Buyers Bazaar. The Dealer’s Room has professional shops, selling the usual assortment of games, game gear, and geek t-shirts. The Buyers Bazaar was a swap meet of old games. You could rent a table for an hour and display all the old game books and gear you wanted to get rid of, selling it at any price you’d like. It seemed like a great way to get rid of those sourcebooks mightn’t have use for any longer. The number of featured games was overwhelming, even for a gamer like me who has a stack of sourcebooks taller than my kid. I had to sit down and review the program book for 30 minutes just to figure out what was playing, when, and what I might be interested in. I’d recommend spending more time preparing with the website so you can hit the con with a play strategy in place for the titles you’re looking to enjoy. At the same time, the logistics involved in setting up these many games is beyond me. This convention was super-organized and once I understood how the system worked, I could have easily filled my weekend.

While there were plenty of games to be played, I was surprised that there weren’t more independent game creators sharing their designs. There also weren’t a lot of small publication games being played. I did get to participate in a playtest for a not-yet-released game, Dracovalis. It was a fun game with plenty of player vs. player action and some strategy to build on. The game is going into Kickstarter some time this Spring, and then into a game store near you. It was great to preview the game and provide feedback to the creator. It also gave me a chance to socialize with other gamers and get recommendations for what to try next.

Speaking of the other gamers, this was not a diverse crowd. The gamers comprised heavily of white males, with a good number of white women and a smaller number of miscellany demographics. I didn’t have any explicitly negative experiences because of it, though my Black Nerds Problems t-shirt did earn a few comments that I found more nonsensical than funny. All of the gamers I talked to were welcoming and freely invited me to play, but if you’re a new gamer, it might be intimidating or isolating. Bring a buddy.

Overall, I had a good time at DunDraCon. It was definitely a nerd environment and great fun for a day or two. There was plenty to do for the money. It was also a kid-friendly space, so if you’ve got a teenager who likes to play, it could be a good family day out.

While touring the wargaming room, I had a nice long conversation with Hector Torres, the coordinator for the Miniatures games, and he hashes the DunDraCon experience best:

We’re all weirdos here. But for four days, no one cares what you do in the real world. You’re a gamer; you’re cool.