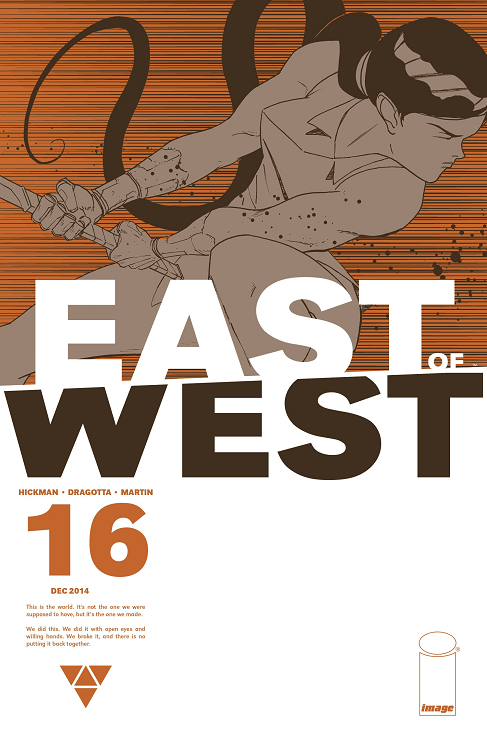 The return of East of West is a welcome one as the last full issue we had back in September set big things in motion, namely the World War and the releasing of the Beast into the world. This issue picks up seeing the first major results of the war, as the Nation (of the Endless America, the Machinists) have conquered the Republic of Texas in grand fashion, all but making the rangers extinct. The last symbolic gesture the Nation needs is the execution of Governor Solomon, the man responsible (sorta) for the killing of a Nation Shaman during the summit and basically the cause of the war. This is the sole action element of the book in his unexpected stay of execution is an incredible sequence, highlighted, of course, but Dragotta’s pencils.

We don’t get to check in with all the factions of course, but this is a good resetting of the status quo in year two of the Apocalypse. The remaining Horsemen are reveling in the war and it’s spoils, strategy is working for some factions, failing for others and Death seems to be back on his way to tell Xiaolian Mao what he believes to be the demise of their child. There is a bit of pretense in this issue, but is still a good setting of the chess board again, as there is a live conflict in the background for all these machinations, and everyone will have to get involved at some point.

Come for the world building and dense storytelling, stay for Dragotta’s art. You can’t really lose there. While I’ve been able to get my fix of Hickman through his outstanding Time Runs Out storyline for the Avengers books during this East of West hiatus, I really have missed Dragotta’s work and I’m glad it’s back. This issue is gorgeous, without qualification.

The game is back afoot as East of West returns with an update on how the world has changed since we last saw, mainly in the fall of one of the sovereign nations. This is still as unique a story as is out there, and it’s good to have it back in rotation.