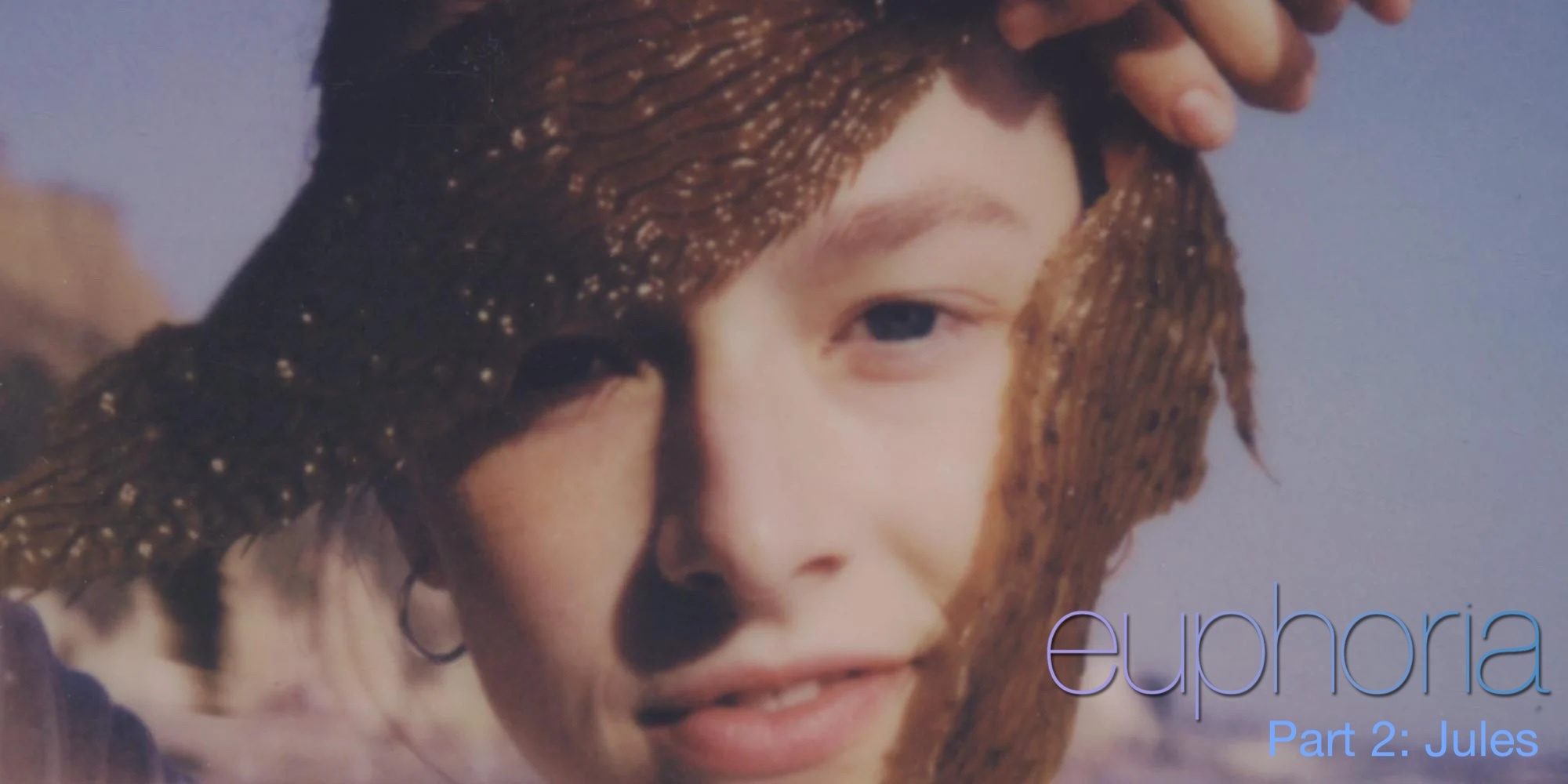 Euphoria has never been as rich as these past two episodes. Maybe it is the constraints the pandemic has put on us all, but these concentrated episodes are giving us the chills and deep emotional cuts. In Euphoria Part 1, we saw Rue fresh off of abandonment and opening up to her sponsor. This episode we get a sensitive Jules in her first therapy session. I applaud the genius use of setting, but the magnificence of this episode lies in the visuals and poetic elegance of the writing. Be aware spoilers are ahead!

Where is My Mind?

If you follow Euphoria, you know the visuals for Jules scenes are out of this frickin world. From the moment I saw her spotlight ride through the trees, I knew this show was here to give me a mind f**k. This special episode even flashes back to that scene in an instant memory while Jules finds the words to describe her situation.

We see Jules, no makeup, plopped on the therapist couch more reserved than usual. Jules’ face is holding back much of what she really wants to say and from her expression remorse is what we see. Her therapist played by Lauren Weed (Arrested Development) sits in a very calm demeanor balancing out the anxiety on Jules’ face. Cut to, we see a full recap of Jules’ journey through their eyes – no really it’s a beautiful shot displaying the colorful blurred images of Jules’ experiences through season one. The light is delicate and the eye movements telling. How can one sight for three full minutes make me want to cry?! As a slight tear begins to well up in her eye, the emotion of it all starts to wash over.

For the rest of the episode, we are given stunning visualizations of Jules mental images. Laying on the beach being washed over by water, to memories of a home life we have yet to see, and a past that will be revealed. The arc of the imagery is an episode unto itself, with multiple fantasies and multiple lives Jules has led. We find out how she truly feels about Rue – we knew she cared for Rue, but never truly knew to what extent. The emotional transparency is in the fantasy Rue shared from Part 1. The fantasy portrays both Rue and Jules living in New York on their own, Jules heading to her art presentation while Rue bids her adieu. They both look so happy. Cut in between this fictional life are the images of Jules and Rue’s true time together set to a melodic soundtrack that makes your heart pump with equal parts sorrow and pure adoration.

Side by side happiness with Rue is misery over Jules’ mother’s addiction. A massive reveal that Jules’ pressure to help Rue stay clean stems from her experience with her mother, aaaand now we’re all crying. The imagery does not let up – if emotions were stylistic photography these images would be despair, because inside despair was a place where immense love once stood. This episode plays with these two emotions. We then take a trip through Jules text message relationship with the fictional Tyler. Images of bodies rolling around in lust and adventure flood the screen personifying her back and forth messages with ‘Tyler.’ It’s a whole ass relationship, one which she says was the best sex of her life. Once she finds the relationship was a ruse the imagery takes a sharp left. The scenes take the same lustrous images and turn them into fear and betrayal. Trigger warnings are in order here.

Hunter Schaffer is up next on that Emmy’s list. Whether it is for writing or for her performance when given the spotlight, we truly see how Jules has evolved and Schaffer has really grown with the role. Jules’ ability to lose herself in the moments is so visceral in this episode. Things we had not noticed before are being highlighted from Jules point of view, the first kiss with Jules and Rue, where we thought Jules was caught off guard and she was instead frozen with emotion.

Shcaffer’s performance goes from indifference to anxiety to pure elations to the pits of despair to remorse and fear. And sadness remains throughout the emotional trip. It is a marathon for just one person. My heart aches as her fantasy with Rue turns sour, and she spends the better part of five minutes trying to rescue Rue behind a locked bathroom door. Girl where is the ballot ‘cus you got my vote. I hope a nomination is calling your name.

Once the credits began to roll, my jaw was snatched when I saw “Written by Sam Levinson & Hunter Schaffer.” You better get it Hunter – you go Glen Coco! I knew Schaffer had to have at least consulted on the script. The detail of experience in gender and trans existence came so effortlessly to Schaffer in a way that seemed deeper than just relating to the text. She begins by saying, “I think I want to go off my hormones” then continues a high-level self-reflection on gender and transitioning before it is “too late.” The idea that puberty marked a point of which a body could not return. That their body would become thick and rough – but also thinking of the beauty in thick and rough.

“I think about the ocean…Because the ocean is strong as fuck and feminine as fuck.” – Jules

The imagery was the wrapping, the fantasy, the box, and the writing was the gift – hands down. I’d find it hard to believe that someone finished this special without being affected. The last scene we are back in reality, and our two characters have finally met up weeks after Jules left Rue at the train station. Both feel they are inadequate to sustain the love that they feel. Rue stands close to the door while Jules sits on the bed, neither able to properly speak the truth. Rue leaves abruptly and we leave Jules sobbing through the rain on her window pane. Where do we go from here? This is some teenage ish with some grown ass issues and you are rooting for the both of them to win. We’re not likely to see season 2 of Euphoria until late 2022, but these performances have enough of a lasting effect until then.