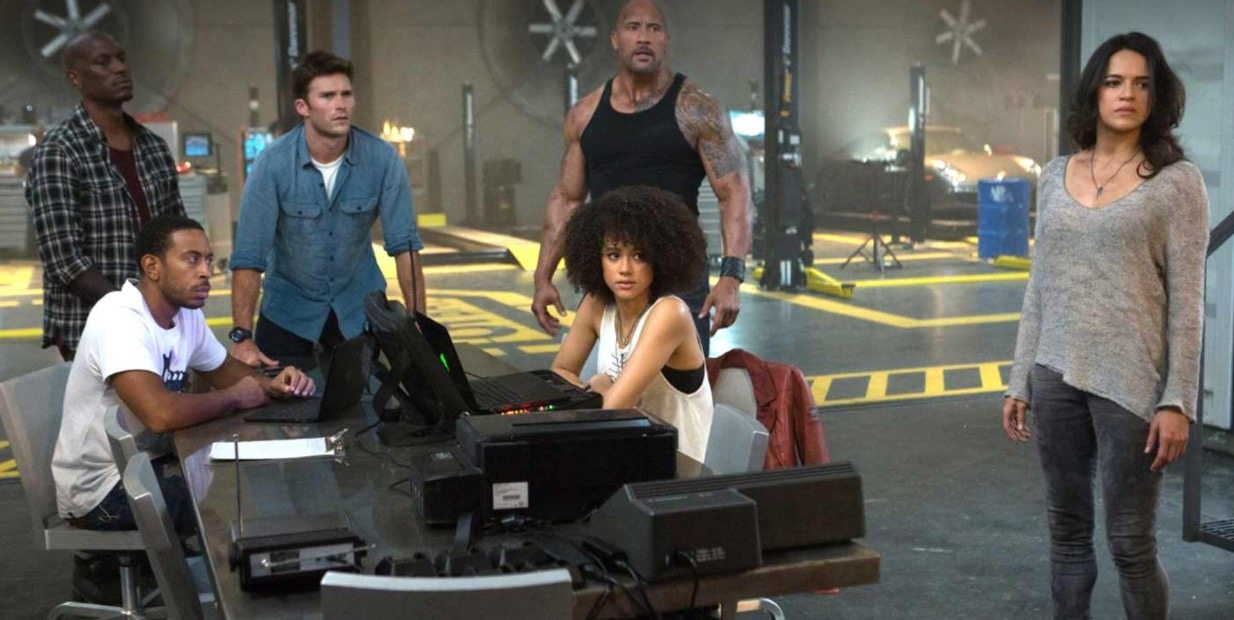 Not for its cast, which includes some of the highest-paid actors in Hollywood in an alchemistic ensemble that had Oscar-winning actors begging to join the adventure. I’ll get to that. Not for its action, which is a hair more ridiculous than ever before, but I’ll get to that, too. Not even for its stakes, higher than any Furious film prior, the risk of nuclear war and the fate of the planet laid in the hands of our team of precision drivers. All such factors handily contribute to the greatness of the eighth installment of the Furious franchise but none fully explain it, none reach to the heart of what separates Fate of the Furious – the series’ first without the beloved heart of the franchise, Paul Walker – as the best possible addition to a series you might think has done it all already (it hasn’t). But one thing does: Fate of the Furious is the most Furious-franchise movie of all time. We should have known when it managed to cram every Furious cliché into a 3-minute trailer, that when Fast & Furious 6’s “all roads lead to here” became the Furious-est Furious we’d seen, that we hadn’t quite reached the ceiling because there is no ceiling, that we have so much yet to do if your heart is open.

My heart is open, so when I saw Dom turn on his family I gasped. I clutched. Tears welled in my eyes; “that’s not Dom,” I said. “That’s not him,” more to convince myself than anyone listening (no one was listening to me, I am clearly alone). My heart is open, so I rifled through the possibilities: cloning, mind control, Mission: Impossible masks, aliens… if you placed a limit on the possibilities I invite you to open your heart further, no solution is so ridiculous here to bat an eye. It was simpler though, as Furious 8 succeeded in its straightforwardness, an expositional minimalism in a series antithetical to the word. Dom is blackmailed with only the smallest plot twist of leverage, and must become a bad guy until his family is safe from it. In a series whose most recent iteration included a world threat and a side revenge plot just for fun, Fate of the Furious shed weight to turn a 2-episode plot from every season of 24 into a feature presentation with Vin Diesel as Jack Bauer and his team as CTU. It does more with less; no fuss, no muss, all ridiculous brilliance by removing the distractions of convoluted plots allowing you to focus instead on one problem and limitless solutions because there can be miracles when you believe and have nitrous oxide. 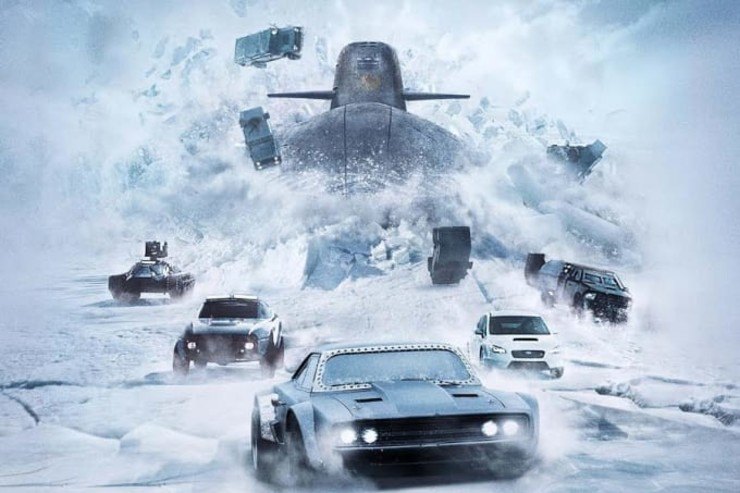 Location plays a role in each Furious as the settings play a defining role in each film’s identity, from its beginnings in LA and Miami to eventually the world. Ten years from now, if not already, you will name Fast & Furious films by location, “the one in Russia,” like you do when describing Rocky movies by the opponent he fought. Here we take pit stops in Havana and Berlin, among other places that help give the series its international feel, but the landmark location is none other than New York City. And this, dear readers, is something I’ve been waiting for. Manhattan seems most genuine in its aerial views of the skyline, but more like LA from the street level with its bright open skies, wide roads, and clear sidewalks as pointed out by my partner accompanying me. Aside from a Fifth Avenue here and landmark there, Furious 8 doesn’t capture the spirit of New York City as much as it does, say, the spirit of Cuba (in which the script includes a description, of course, explaining “the spirit of Cuba”). There’s no “this is Rio” moment rife with New York clichés, which would have been a welcome parody to pay Furious homage to one of the greatest cities on earth, but the missed opportunity of a Brooklyn tribute or comedy at the expense of the Upper East Side is made up by a top-3 most outlandish antic when Cypher – the woman blackmailing Dom, played by Charlize Theron’s blonde dreadlocks – hacks every car in New York to auto-drive themselves to steal Russian nuclear codes being inexplicably driven through Manhattan.

It’s here Dom has one of his many action star scenes, one you almost imagine he wrote himself after snatching the pen from his writers after not responding drastically enough to his suggestions to make him more badass-er. (I sincerely imagine a conference room where a high Vin Diesel says “more badass-er” before snatching the keyboard and saying “like this!” as he types his own scene.) After cars fall from the sky when Cypher says “make it rain” (actual quote), Dominic Toretto climbs the pile of wreckage with a matte black shield, electric saw, and – this cannot be overstated – a fucking Deathstroke mask. From the opening street race where Dom races in reverse to put-heauxs-in-NY-onto-DKNY across the finish line, to the closing credits where his airborne car parts a sea of flames as he drives to the rescue, this movie was made to solidify Dominic Toretto among the elite of recognized action heroes. And like most, he came complete with catchphrases. “The problem with standing on a tiger’s neck,” says Dom, “is that you can never let up,” he warns Cypher’s thin blonde dreadlocks. Why would anyone, practically or impractically speaking, step on a tiger’s neck? Do they step on tigers’ necks in circuses? Is that even a saying? It doesn’t matter, the only thing that matters is Dom is a metaphorical tiger. 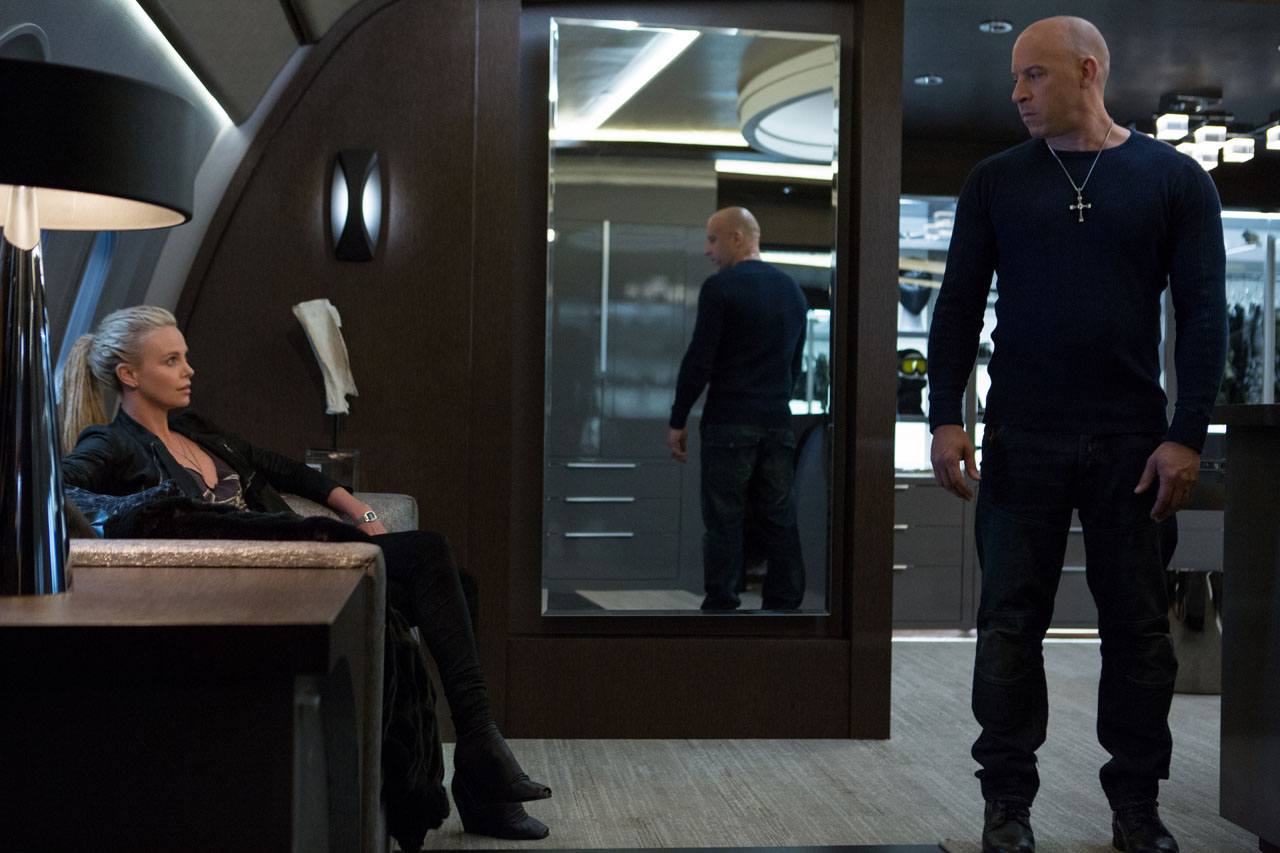 Aside from Toretto and the movie’s physics-defying action, Dwayne Johnson and Jason Statham bring their own charm to the film with Hobbs and Deckard’s feuding bromance rivaling that of long-time bickering duo Roman and Tej. The growing chemistry between the characters continues to add depth as their dynamics evolve and stretch over time. Even their car choices represent their respective personalities, a nice touch reminiscent of when you grew up browsing auto magazines and choosing which luxury car is most you. Here we have Hobbs – a first-class action hero and comedian, one who could easily lead a franchise himself – in an ongoing battle of trash-talking wits with Deckard, who holds his own with clever comebacks and a body count to match. Hobbs and Deckard offer the best hand-to-hand fights of the whole film, each with their own style. Hobbs is blunt force trauma personified, walking through rubber bullets bouncing off him like Superman before crushing bodies through walls; Deckard is agile and skilled, technical and precise as he takes down man after man with speed and improvisation. Of course, Johnson bends his character into the Rock several times, notably Rock Bottom-ing a man onto a pole during a prison riot and calling Deckard a son-of-a-bitch more aptly pronounced “sumbitch.”

Overall, the perfect balance of action, comedy, and friendship family sets Fate of the Furious as the best yet in a series so charismatic that famed and immensely talented actress Helen Mirren begged for her role as a character (she plays Deckard’s mother). Furious 8 also covers nearly every franchise cliché established to date: