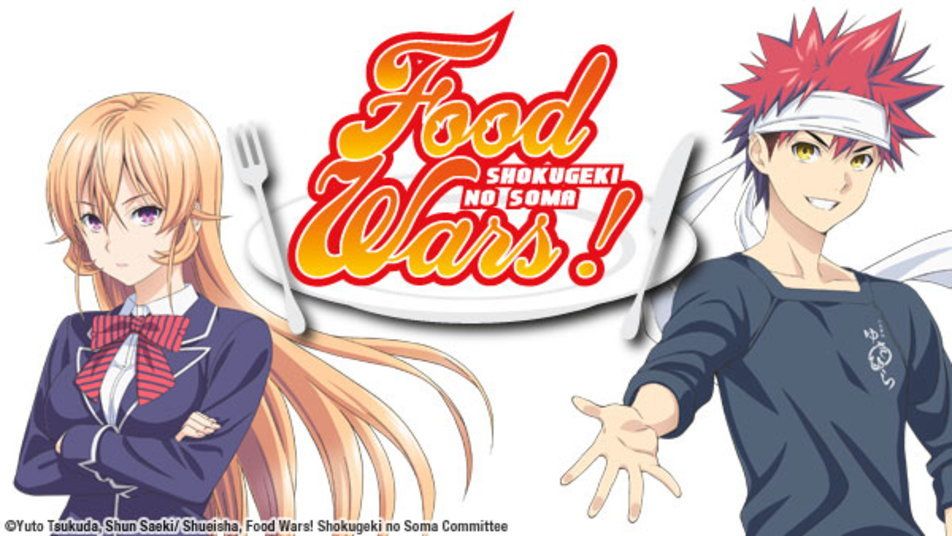 When I consider my list of my favorite anime of 2017, Food Wars!: Shokugeki no Soma takes one of the top slots. I have a weakness for shonen and the lovable underdog character who works his way to the top, so I couldn’t help but love Yukihira Soma, whose dream is to surpass his father’s level of culinary expertise and take over the local diner his father owns. Of course, in order to achieve his goals, he must attend the uber-elite Totsuki Academy, where students regularly perform in shokugekis, culinary battles to determine their academic fates.

While the show does tend to follow many shonen tropes, it still delivers its own utterly unique and engaging story. And as for the food itself — Iron Chef could take a few queues from this series, which showcases recipes more diverse and inventive than what I see on any of my favorite Food Network shows (and believe me, I’d know; I watch a lot of Food Network shows). But beyond the culinary prowess the show’s characters exhibit, there’s also the sheer beauty of the dishes. No anime can truly be called “great” unless its animation lives up to the tone, style, aesthetic, and intention of the narrative. So if you want glistening broths and shiny meat with your culinary underdog story, well, you’ve got glistening broths and shiny meat in Food Wars!: Shokugeki no Soma.

As much of a joy as Food Wars! was in its first and second seasons, it turned on the heat, so to speak, in the third season, which premiered this past fall. Food Wars! The Third Plate had the show take a more serious turn, as Erina Nakiri’s father, Azami Nakiri, and some members of the Elite Ten stage a coup to institute changes in the school — and set their sights on the even loftier goal of changing the culinary landscape of the whole country.

Though the third season focused less on character development (with the exception of a few, like Erina, whose childhood trauma at the hands of her father comes to the forefront) as it did on plot, it still illustrated the show’s capacity to build drama with a larger scope. It also showed how such an entertaining, lighthearted series can deliver an interesting take on class politics.

From the beginning, Soma is characterized as the black sheep who’s going to attend Totsuki and shake things up. Why is he the outcast though? Part of the reason is his ignorance about the culinary world and Totsuki’s influence and prestige. There’s also his easygoing confidence that occasionally toes the line toward impertinence. But the reason that the show keeps returning to over the course of its three seasons is Soma’s culinary background. Unlike the students who have been raised in the world of fine dining, who have been prepped and primed to rise to the top at Totsuki, Soma worked at his father’s modest local restaurant. Megumi Tadokoro, too, is characterized by her small-town upbringing and is barely managing to keep her place in Totsuki when Soma meets her in season one.

The elite chefs of the school, however, represent the power that comes with the high-class culinary world. In fact, the power they yield is literal; they are the highest governing body in Totsuki and rarely deign to share space with the lower-ranking students. But the Elite Ten also have resources. During the Moon Festival at the beginning of the third season, we see the vast difference rank makes in even a school street fair. Lower-ranking students have to hustle at little carts and booths while members of the Elite Ten run whole restaurants with expensive meals on the menu. There are reservations and private dining experiences. Erina only takes reservations at her posh place, while the top seat, Eishi Tsukasa, serves elaborate nine-course meals for only a handful of customers.

Even so, in seasons one and two, students are given the opportunity to show their ability and rise through the ranks through shokugekis and various other culinary trials. But when Azami Nakiri makes his appearance in season three, he arrives spouting a kind of fascist kitchen ideology. Only the pure and privileged may rule, with him at the forefront, and the individual must fall in with the uniform practices and aesthetics of the elite. No more creativity. No more independence. But beyond that, Totsuki becomes transformed into a militarized space; the students become a kind of army wherein all deviants and “lesser chefs” get weeded out. And the army’s target? The “less worthy” culinary establishments in Japan, which are frequently defined as the “local” food, the “regional” cuisine, the restaurants that cater to the public.

The problem with this thinking, of course, is that diverse and accessible, affordable food options become analogous with Azami’s definition of “bad” food. This take on food leaves no room for anything outside of a classist fantasy — a fantasy that is used as a weapon.

Soma, then, becomes the perfect hero to save Totsuki, because he is from what would be considered the lower class, in terms of his cooking. His father’s diner serves (what we can assume is reasonably priced) comfort food for the masses. But his father, having also studied at Totsuki and held one of the top seats, is also classically trained. Soma’s technique is a mix of the classical and the modern, global meets local, high class meets low class. His position at the cusp of these worlds allows him to not just play the game but also have the opportunity to beat it. It’s a privilege he has, but only because he is a hybrid of both representations of class. The reality is that a “low-class” chef, one who only knows how to cook local cuisine for the public, would not stand a chance at Totsuki — at least not for long, and certainly not in Azami’s newly reformed version of the school.

As our hero, a hero who mixes French technique with processed snack foods and makes other unorthodox combinations, Soma represents how individualism and ingenuity will always prevail despite the oppressive systems that may be at work. And though class politics may not be overcome by inventive soufflés and tofu dishes in real life, at least Food Wars! presents a version of the world in which status may fall secondary to hard work and originality, and in which being the weird outsider kid from the other side of town doesn’t preclude you from greatness — or great food.