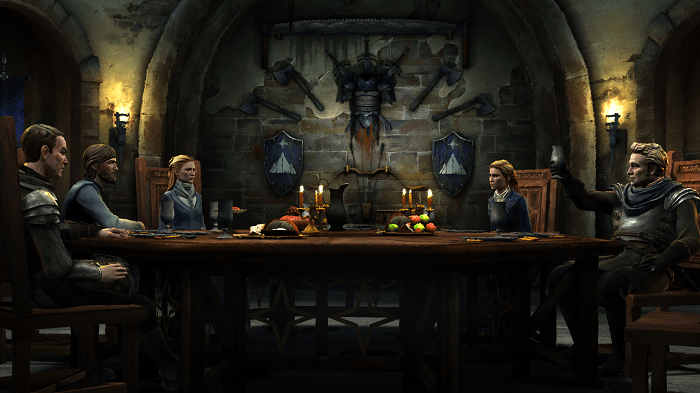 By Episode Four of Telltale Game’s first attempt at adapting a Game of Thrones story, the drama is still rising and we still have no clear idea what the resolution to any of these conflicts might be. The game doesn’t give you anything easy; for every victory you think you have gained, you are humbled pretty quickly. House Forrester is still on the losing end of almost all their situations, but at least things have begun to turn for some of the members. The one with the most impact deals with Rodrick as he’s granted an opportunity to up-end the occupation of his house. And thank you for that TellTale. Gotdamn, playing his storyline was beyond depressing.

This episode was pretty action-packed actually, with multiple storylines and some action heavy sequences. It’s all balanced well with the dialogue and political drama that make Thrones an enjoyable show to watch and game to play. My favorite aspect of this specific episode was Mira in King’s Landing. She is definitely becoming accustomed to life in King’s Landing as a cutthroat manipulator. She’s joining some pretty heavy company as her moves to gain information about who is plotting against her family are on level with Cersei’s plotting. There isn’t really a weak link to the storytelling this time around, as Garret’s trek north of the Wall isn’t the most exciting one, but it still keeps things interesting, especially with the action sequences.

The graphic quality is on par with the better episodes of this series thus far. There are no big lapses and the watercolor feel maintains itself throughout the episode without losing consistency. The more color settings still fair better and allowed to be more vibrant, such as the King’s Landing and Meereen scenes.

My only complaint is that while things are happening, some storylines don’t seemed to be paced as well as others. It sometimes feels a bit like the story is being stretched out to fill all the episodes as opposed to the story moving at a more organic pace. Still, the stories aren’t bad, so this is a minor gripe. The series has still been thoroughly enjoyable to play.

Episode Four is in the books and the story moves along, some places sluggishly, but still entertaining. The characters have become strong enough now, where they don’t depend upon crossovers with popular characters as much. Some tables have begun to turn for a couple of characters, but as always, there feels like another shoe will drop for their short-lived success.