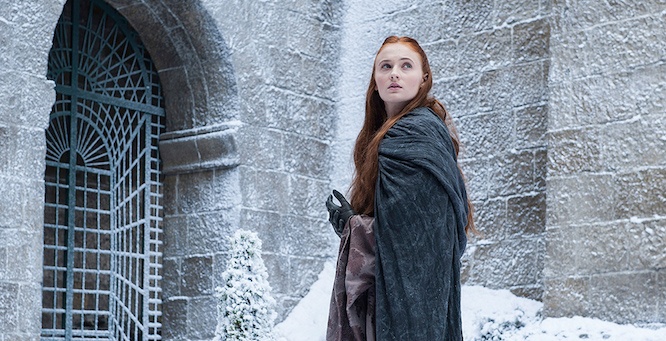 Spoilers be fallin through the Moon Door, b. Watch your step.

Ahhh, we’re back up in Dem Thrones again and dare I say, shit is getting real interesting. We start the episode off with the Kingslayer Brothers realizing they will probably never drop a studio album together again as they deal with the fallout of Tyrion dropping the mic on Law and Order: Kings Landing last week. Jaime congratulates him on giving a great speech then reminds him, “Oh yeah, your boy still ain’t got a right hand and I can’t slice through Dornish wine with my left yet either.” Tyrion jokes that if he still fought for him, they could end the Lannister line in one tidy afternoon. They laugh…and then they stop laughing 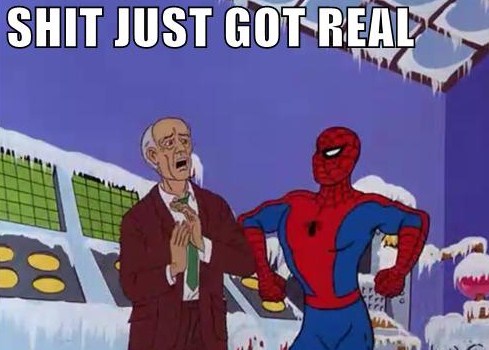 Apparently, this episode is all about Tyrion not getting ANYTHING he wants, as he hopes that at least Ser Meryn Trant, will be the Crown’s champion against him. Then Jaime drops that bad news…

What follows next is what I can only assume is the footage that Spartacus didn’t use and sold for cheap to HBO in case we ever wanted a mini montage of the Mountain disemboweling muthafuckas. I guess if you have a short memory and don’t remember that Mountain BEHEADED A GOTDAMN HORSE in season one, then maybe you needed to see him slice through about 4 dudes from Flea Bottom, but it seemed a bit much to me

After that, its back to our favorite buddy cop show, Arya and the Hound. Is it me or do dying, inconsequential characters tend to give the best monologues on this show? Arya hits the dying man with “Nothing isn’t better or worse than anything. Nothing is just nothing.” And Arya knows about that shit. She would love to be dealing with a little bit of nothing for once. After Wish-it-were-wine is mercy killed by the Hound, the Hound gets bitten on the neck by the worst vampire ever. Let me see if I got this plan right:

1) Sneak up on Hound when his back is turned.
2) Don’t use a sword, dagger or anything like that.
3) Jump on his back and try to tear his neck out with your bare teeth.
4) If that doesn’t work, just make an impromptu speech about the bounty on his head.
5) Die

And here’s a pro-tip: If the little girl that you threatened to rape and have heard recite names of people she plans to kill, is standing in front of you with a sword and says she can’t kill you because she doesn’t know your name, DO NOT STATE YOUR NAME WHEN ASKED. That one is on the house.

We return to The Wall for their favorite past time, Shit on Everything Jon Snow says. Seriously, Jon success rate for getting his ideas through to the council are lower than Donald Sterling’s percentage of friends that are Black. Every time he opens his mouth, its like:

Back to Lonely Hearts Landing where we continue to see the slow torture of Tyrion continue as Bronn come in looking like he found a bag of gold coins that fell off the back of a wagon.

This dude gotta a cape, b. Count Bronn gotta gotdamn Cape. Tyrion unfortunately only got hopes, and ifs and I may one day’s to Bronn, but Bronn don’t like the cold or getting cleaved in half by the Mountain. After reminiscing about their good times, you know, Tyrion asking Bronn to kill dudes and Bronn killing dudes, they shake hands, probably for the last time.

Across the Narrow Sea to Mereen, Khaleesi got the worst home security system on the continent when Daario sneaks in the window with some wild flowers in his pocket. Then Dany remembers that she only got one more day before she gotta return Magic Mike to Redbox

Oh, Melisandre. How we missed your crazy ass the last couple of episodes. What does Melisandre put on her resume when she’s not fleecing the Baratheons?

-A penchant for burning dudes alive
-I keep the cyanide next to the bath salts, but I can tell you which is which quickly
-I can do all this in the nude

Selyse Baratheon didn’t stand a chance people. I mean, how many people has Melisandre manipulated with that old “Look into the flames” pick up line? Shit is like Novocaine, just give it time.

Poor Jorah man. If this were a Rom-Com, him and Daenerys would get together at their 10 year high school reunion. But I don’t think they let dragons into the gymnasium, so probably not gonna happen. Still Dany shake off his disapproval with some, ‘Homie, that was just some ass.’ Then we watch two upper class white people have a spirited discussion about slavery and mercy for slave masters while literally standing in an ivory tower before Dany makes Jorah feel good about changing her tactics. So you know, pretty much how most liberal conversations happen. Everybody happy.

Lets skip quickly past the Hound’s childhood stories and nightmares about fire and Hot Pie’s lesson that you cannot give up on the gravy to Brienne the Dark Knight and ,, , Podrick. Back to King’s Landing and Peter Dinklage’s last run at this year’s Emmy as Oberyn makes Tyrion’s third visitor of the episode. Oberyn is a beautiful man. But he woke up like this. Because he went to sleep like this. And apparently he went to sleep in that Mustard overcoat. I’m sayin, can we get your boy a wardrobe change? They don’t have a J.Crew in Kings Landing? Jos E Bank? Nothin?

After he tells Tyrion the most depressing story about his birth ever which got Tyrion sitting in the corner like:

He reveals that his plan to come to King’s Landing is actually working perfectly because he plans to be Tyrion’s champion and Kill the Mountain to have vengeance for his sister, nieces and nephews. So you know, things are looking up.

Last but not least, we end the episode up in the Eyrie where…I don’t even know where to start. Sansa is homesick, so she builds a perfect snow replica of Winterfell before Robin the Simple one comes through like Snoop Dogg in New York

Of course (and finally), Sansa answers in kind:

And then, shit got realllllly weird…

Mr. “Please call me Peter(phile)” who has been stalking Sansa from afar gives the most confusing speech to Sansa by first telling her how beautiful her mom was, then saying in a different world Sansa could’ve been his daughter, then telling Sansa she’s even more beautiful then her mom, then…(I need an adult, I need an adult). Maaaaaaannn….listen. We’ve been joking about Littlefinger’s Registered Sex Offender’s tendencies, but I feel like at this point, he needs to go to all the Lords loyal to the Eyrie and tell him he’s moved into the neighborhood. This shit is getting crazy…

…But not as crazy as the next scene!

Of course Lysa sees the kiss and bastardizes the moto “if you see something, do something,” by inviting Sansa to a short lecture on the Moon Door. After threatening to make Sansa fly for kissing Peter, Littlefinger enters the room, diffuses the situation and finally puts an end to Lysa’s concerns. About, ya know, life in general. So cold how he ended it though, he didn’t have to cross over Lysa like that (he kinda did have to though).

And now Lysa’s body may have just broken apart when she hit the ground, or, maybe, her head is just sitting there alone, blue eyes, staring at nothing.

We’re off next week for Recaps, while HBO takes a week off to count their subscriber money, but it looks like we’ll get some Wildling Action (the best kind of action), some cats putting the Sansa in the interrogation room (you know you done fucked up now, right) and battle in King’s Landing that will decide the fate of Tyrion. See you then.