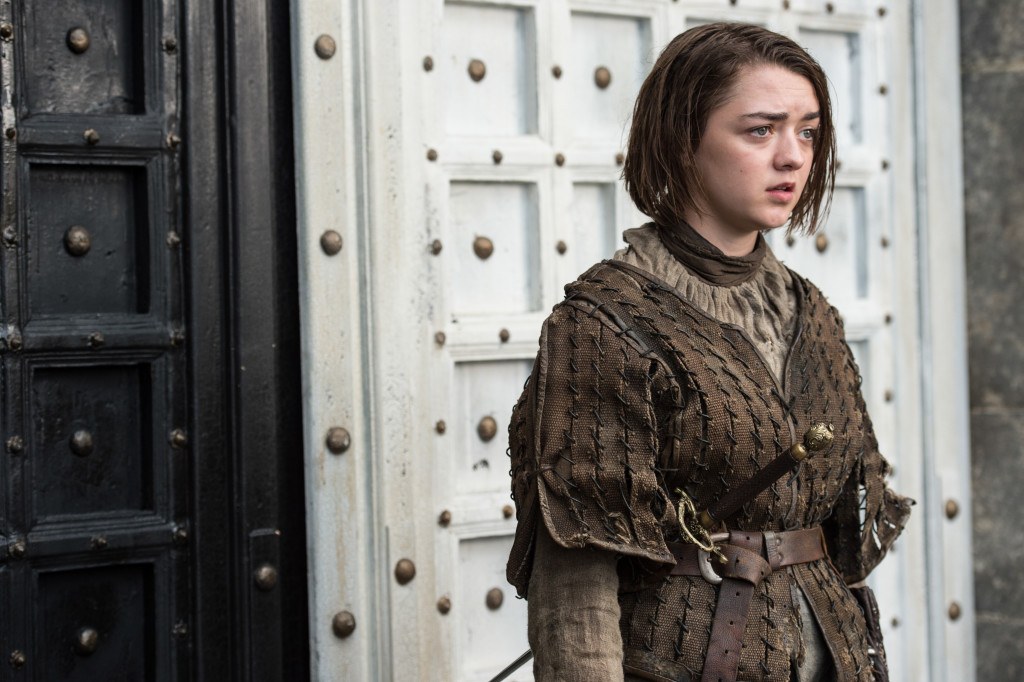 Ok, off rip, let me say, Yes, I have read the books, but no, my recaps aren’t going to devolve into me complaining about what they did different. You know why? Cuz that’s not why you came to BNP. You didn’t come to get that real rap raw so I can do some 3rd grade lesson plan of compare and contrast. That shit is boring, b. Tell your book snob friends on twitter that that shit is boring too.

Welcome to Braavos Arya! If you thought the continent of Westeros gave no fucks, then chiiile, listen. Arya flinches at that loud horn and the captain tells her to not be scared. Arya is like, I ain’t scared, you know how many bodies I got on me homie?

She get dropped off at the House of Black and White which is very acutely way the fuck away from everything else. Like that’s not a sign or anything. Arya knocks on the door and Evicted Danny Glover answers the door. Arya hits him with that Valar Morghulis hoping he’ll let her inside. Yo, I need cats to remember that Valar Morghulis means “All Men Must Die” but Arya be saying that shit like it’s “Happy Holidays.” Evicted Danny Glover waves his hand in front of Arya and tells her these are not the assassins she is looking for before closing the door on her. Then Arya sit outside on some Fight Club shit hoping Evicted Danny Glover gonna come back out like Tyler Durden. When that doesn’t happen, she throws that coin in the river and leaves.

Back in Westeros, we check in with Brienne and Pod the Axeman as they roll up to a tavern. Pod is eyeballing the serving girl, probably wondering if the legend of his performance in the brothel have spread this far north, when he noticed Sansa Stark is up in there, getting her ale on too. Brienne sends Pod out to gather horses and then blows up Littlefinger’s spot like Ali would do to his opponents training sessions.


[divider type=”space_thin”]
Four things I want to address with this scene:
[check_list]

Brienne makes that quick exit, Podrick runs his horse into a lake and Brienne does the one thing she’s well at and kills a couple of dudes. And yeah, that Valerian steel ain’t no punk.

In Depressing Landing, Jaime has been summoned before the Queen because the Sand Snakes sprung for that Amazon Prime and their packaged got delivered to Cersei posthaste. They both see that it’s a threat to Myrcella but Jaime is like, yo, can you keep it down on the whole “I fathered your children” thing?

Then Cersei calls him an absentee father. So, if you were wondering where the logic train from Cersei is on this one, its probably careening into the Narrow Sea at this point. Cersei is mad that her brother didn’t lay more claim to the children he fathered with her even though they were passed off as the children of the king and would’ve have brought ruin upon the whole Lannister name. Aiight then, Queen. Jaime might not have all that back payment on the child support but he plans to make it up by going and getting Myrcella from Dorne himself.

….well not exactly by himself. Bronn enjoying his Lordship but your boy could not be more bored. I know dude enjoys these fresh linens but being married off to the homely sister that won’t inherit the castle probably isn’t his ideal retirement. Which is good that none of that shit exists anyway because now he gotta be part of Jaime’s black ops squad to keep any of the new shit he got.

And speaking of Dorne, everybody except Myrcella is FED UP. Ellaria, who’s viper bracelet game is on fleek, rolls up on Prince Doran like she fin to do something.

Oberyn is dead. Their sister, nieces and nephews BEEN dead and the Prince is straight up staring that Busch Gardens from his balcony. She probably got cause to be angry cuz it really does look like the Prince ain’t doin’ shit, but she started talking a lot of “ours” and “we” shit and I had to check the transcripts right quick. Like, your last name is Sand, right? I mean, I appreciate that Oberyn loved you between moments of banging every attractive person between here and King’s Landing, but you gots to chill with this “we” shit.

Back in Meereen, the no chill capital of the world, cats are trying to find these Sons of the Harpy dicks and bring them to justice for killing the finest eunuch in Essos last episode. Daario catches old boy in the wall and they discover he left all his killing tools and costume in the wall with him.

They bring this before Dany and her small council argues over how to handle these Harpy muthafucka. Here’s the thing, Dany needs to have a consultant come in and do some analysis on the efficiency of her staff cuz not all these muthafuckas need to be here voicing opinions and shit. I’m glad she all about having some diversity in congress, but some of these folks have singular skills and reasons for being here, but diplomacy and governing ain’t one of them.

Ser Barristan then gives her a history lesson on how her father was the worst person in history. Seriously. This was like someone sitting down a promising leader and being like, Hey, let me tell you some things about your dear father, Mussolini. Dany promises Ser Barristan that she will let Harpy have a fair trial… which means you already knew that would get fucked up.

Still across the Narrow Sea, we catch up with the caravan where Tyrion is still doing his Fear and Loathing in Los Essos, shit. For real, I know Tyrion is in a low place right now, but he either needs to take the cross bow bolts to the chest or get of the pot. Varys reminds him that when he’s not pissy drunk, he can actually be an effective leader. Of course, Tyrion’s blood type is probably Arbor Gold at this point, so we’ll see how much that matters.

Back in Depression Landing, Cersei is taking dwarf heads and taking names. She has put together a small council that looks like one of the worst teams ever assembled. This is like putting together a Justice League team with Cyborg as the leader. Her small council looking worse than Selina’s staff on Veep. If Cersei’s squad was a basketball team, they couldn’t make the playoffs in the East. Things are as bad as they’ve ever been. But Uncle Kevin Lannister is all the way Fed Up. He spotted the jig a mile away and is not interested in being relegated to fuckboy status under Cersei.

Up at the Wall, it’s election season, which means the sworn brothers are tired of seeing attack ads and getting roto calls about who they should vote for. But first, Jon is getting ready the riot act from Stannis because he showed mercy to Mance. Jon hit him with, bruh, how you think they gonna follow you when you were burning their leader alive. Nick Saban would’ve killed you on the recruiting trail. Now all the wildlings wanna take their talents to the University of Alabama and Stannis up in here in the north with a terrible incoming class. But Stannis breaks out the big joker and tells Jon that if he pledged fealty, he would make him Jon Stark, Lord of Winterfell.

So I gotta question for you, when this scene happened, how far back did you have to rewind your DVR because you straight up passed out? Jon Stark, my wilding?!?! Jon Muthafuckin Stark?!?! Stannis play too much man.

Jon still trying to decide if he wants to be a legit lord of Winterfell or continue to freeze his ass off up at Castle Black with no female companionship and even less products for his hair when the voting for the next Lord Commander starts.

Ser Alliser seems to be a front runner, but then Sam gets up and spits the hottest verse this far North since Royce Da 5’9″ was still working with DJ Premier. He says it should be Jon and it shouldn’t be close. It is close however, with Jon becoming the 998th Lord Commander of the Night’s Watch before he can legally smoke.

Of course, Arya is becoming the Queen of rebuttals when dude said that her sword would be worth 100 pieces and she replied, “nothing is worth anything to dead men.” Which is badass for, “don’t come around acting like you want this Needle-work. My quilt game be on 9000.” Before Arya can teach these bastards the water dance, they see Evicted Danny Glover behind her and take off. Arya follows EDG back to the House of Black White demanding to know who he is and why folks are scared of him. I mean, duh, Arya, Black dude. He tosses the coin she had tossed in the river, then reveals himself as the assassin formerly known as Jacqen before inviting her in.

In Meereen, this dude Mossador ain’t really about this Queen’s Justice shit and puts the Son of the Harpy on the Summer Jam screen with a caption, “Kill the Masters.”

For all of Daenerys’ posturing as the great liberator, apparently she never read about Nat Turner. Mossador thought he was doing her a favor by taking the decision of what to do with Harpy out her hands, but instead, she feels like she can’t let his actions of defiance go unpunished. Even though the crowd is yelling for mercy, Daenerys still rolls up to the deli and requests the Stark cut. Daario let that body hit the floor and the people Meereen are PISSED. They start hissing like Dany just said some misogynist shit during a poetry slam. Ain’t nobody ever had to leave the Green Mill that quick fam, cuz you know first come hissing, then comes the throwing of shit. Even for Mhysa.

So, Dany is having a bad run. First the dragons hate her for being locked in their rooms. Then the people turn against her for executing a former slave. But then who shows up: DROGON DA GAWD, named for Khal Drogo, the original Sun and Stars.

But if you thought that was gonna bring Dany some comfort, then, you got way too much faith in how this Game of Thrones thing works. Drogon is like the kid away at college that comes home on Friday afternoon, drops off his laundry, says, Hi mom, hey, I’m hanging with Terrance and them, so I’ll be back soon.

Then next time you hear from him, he on the road with the laundry you did for him on the weekend in the back of the hatchback, talkin about, yeah, sorry mom, I had to get back to campus, lots of studying to do. That shit hit folks all up in their Twitter Feels (started by our very own Clips McClain). Drogon didn’t even wait for Dany to ask how his semester had been so far. It’s all bad for our Khaleesi fam. All bad.