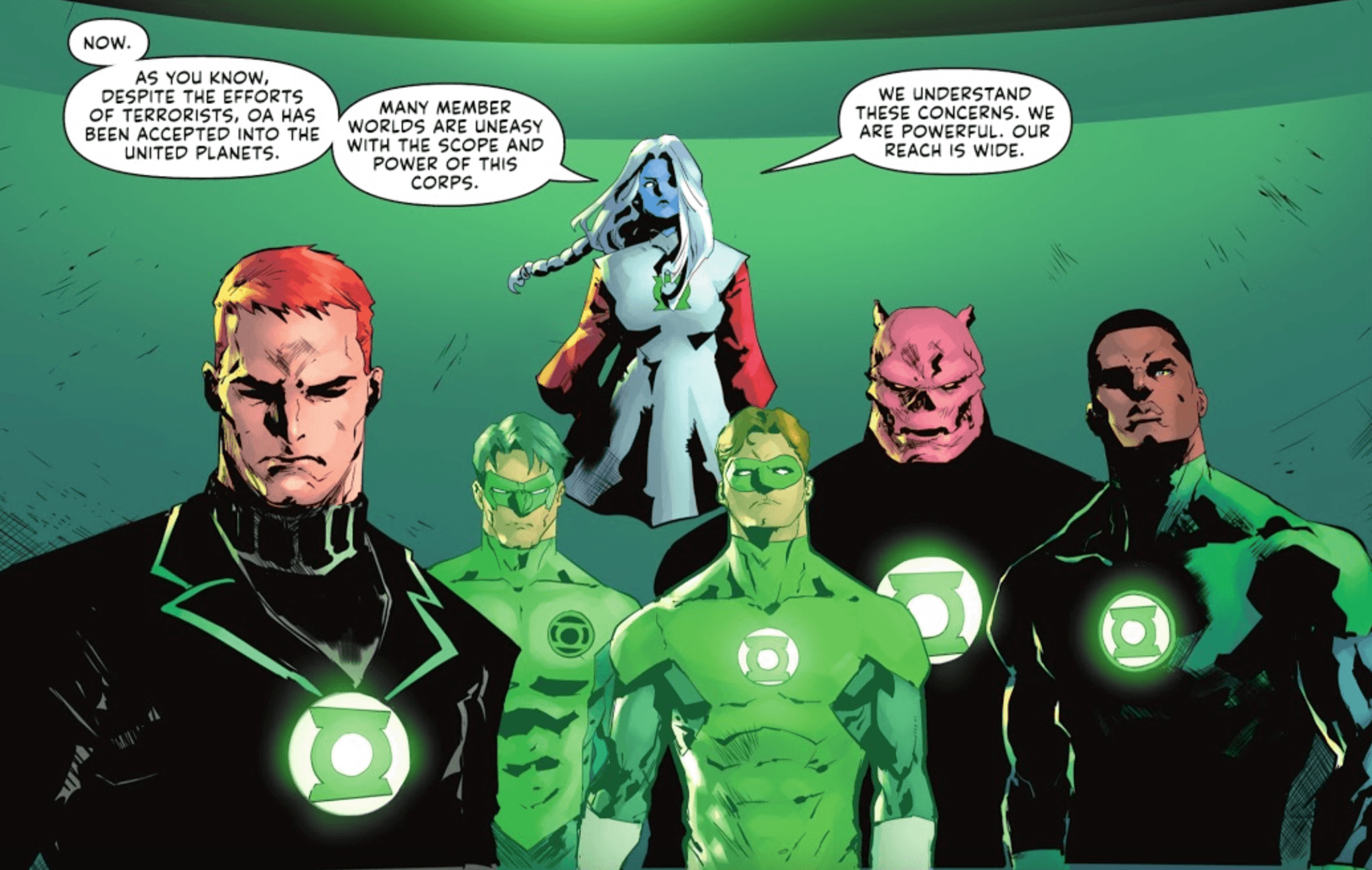 *walks in from the shadows lighting a candy cigarette* When we talk about the Green Lantern comic book series, it’s dope because there are so many different volumes and iterations of the characters and stories. *exhales candy smoke*

All of that usually depends on the writer. Robert Vendetti’s run highlighted the Green Lanterns as a team and individually. For the past couple of years, we’ve seen the Green Lantern corps focusing more so on space adventures with humanitarian issues every so often but nothing heavily too heavily political. The series’ current writer Geoff Thorne? I said, this man Geoff tho? Geoff Thorne picked up the pen and said, “Comics ain’t political *huh* THEY GOIN BE POLITICAL TODAY.”

In the upcoming Black Nerd Problems book, I wrote an essay about how the Green Lantern comic books have lowkey been tackling police accountability and reform for years. On Earth, Green Lanterns are referred to as police in order to simplify their role. The word police doesn’t hold the same weight when referring to the Green Lanterns since their histories don’t share the same roots. Thank god, because I got a Green Lantern tattoo (Yes, I will always mention this for each GL write-up I do. Deal with it) and was ready to cut ties if need be.

Unlike police institutes in real life where the officers that do get fired are just reinstated at a different precinct, we’ve seen how Lanterns that have broken that broke their oath were properly punished and expelled. However, what none of us have ever seen is a change to the status quo the likes of which Geoff Thorne has introduced by rolling back the power and authority of the Green Lanterns. To me, this is clearly a nod to the police abolition movement. A movement where communities create alternatives to police, the defunding of police, as well as cutting their numbers in half. If you’re asking why abolish the police instead of reform’em, I’m simply going to say ain’t no reforming an institution literally based in and practicing racism. Before we get into the new status quo for the Green Lantern Corps, we gotta establish what the lay of the land use to be.

Lethal Force Has Been Enabled

If you don’t know, space is divided into 3,600 sectors. Each sector is patrolled by two partnered Green Lanterns that are natives of those sectors. Green Lanterns are known through the universe as law enforcement serving under the Guardians of The Galaxy, the oldest beings in the universe. The main priority of the Green Lantern Corps organization as a whole is peace. They are peacekeepers above all else. However, when war broke out with the Sinestro Corps, the game had to change for the Green Lantern Corps. These peacekeepers were now authorized to use lethal force for the first time in billions of years by their superiors, the Guardians of The Universe. This occurred under Geoff Johns’ 2005 Green Lantern run.

I remember these “Lethal force has been enabled” scenes vividly from the Sinestro Corps War arc, especially the look of shock on Kilowog’s face. That look stayed with me through the years. It was dope seeing the Green Lantern Corps rightfully fucking up Sinestro Corps members something nasty. It was a one-sided war up until this point. Emphasis on war. Thousands of Green Lanterns lost their lives before lethal force was allowed. The playing field was now leveled. However, some lanterns didn’t agree with this call and refused to kill.

Even after the war was over lethal force was still allowed to be used against any enemy of the Green Lantern Corps. Luckily, the organization suffered only two instances where a Green Lantern killed a surrendering villain. Green Lantern Laira and Green Lantern Tomar-Tu were both punished and expelled for their crime. That’s two cases out of seven-thousand two hundred Green Lanterns. It did not matter that their victims were mass murderers and killers. They had surrendered and excessive force was used. End of story. There was a moment in the Sinestro Corps War where Lantern Vath Sarn who was a military man on his planet says, “We’re soldiers, we got real weapons, let’s use’em.” That’s all well and good when in an actual war. However, Green Lanterns having lethal force enabled on their power rings is akin to Police having military-grade weapons and gear. Fam you ain’t on a battlefield you in a community treating the residents of that community as if they’re in a warzone. The fuck you doing?

Fast forward to 2021 with Geoff Thorne having The Guardians of the Universe’s homeworld Oa (based of operations for the Green Lantern Corp) joining the United Planets (think United Nations but for planets). In a show of trust and accountability, Geoff Thorne had the Guardians of the Universe do something we haven’t ever seen them do before ever. They rescinded their power and influence in the Galaxy and actually admitted their shortcomings over thousands of years that caused not only harm but an entire genocide. I love how it was a woman presenting Guardian named Nemosyni that informed the universe and the lanterns of the change instantly. She said being the oldest race alive The Guardians took a role of an authoritative parental figure over the universe when they should have been seeing themselves as older siblings. That changes now.

Fam, do yall understand how fucking big this is? This incarnation of the Green Lanterns debuted in the Silver Age of Comics back in 1959. This is the biggest change for the Green Lantern Corps to undergo in the sixty-two years they have been comic books in our time and in billions of years within the comics. I am legit at a loss for words. John Stewart the corps leader is like, “I done seen some shit like ‘what the fuck’ but never on a Wednesday morning like this.” The Guardians answer his concerns on some real politely put get down or lay down. The Green Lantern Corps is a volunteer organization. Those that disagree with being re-assigned from their sector can go and they will be replaced. My reader, do you see how simple this abolishment shit could fucking be when those in power actually listen to their communities? The Guardians admitted the shortcomings, heard what the United Planets had to say, and said, “We got you. No more Green Lanterns… here, here, or there.” I fucking love it. The Guardians even abolished ranks amongst the Lanterns. They said we all move as one. Gangsta shit, man!

The abolishment of the Lanterns from 1,200 sectors is huge but legit not even the biggest thing as we see that Earth will become the successor to the Fourth World of New Genesis where the New Gods reside. Once their time is over, Earth will become the Fifth World. We’re shown the planets that will make up these worlds and see that Krypton was supposed to be a part of this galaxy but was lost. Fun fact: GL Tomar-Re was en route to save Krypton with a rare compound called Stellarium but got blinded by a yellow solar flare, he flew blind and right as his vision cleared the first thing he saw was Krypton exploding in front of him, he was rescued by the Guardians. Worst luck ever.

Xanshi was lost due to John Stewart (written out of character we must note) was being arrogant. He left the Martian Manhunter behind in order to save Xanshi and arrived at a yellow bomb in Xanshi’s core. At the time GL power rings were still weak to yellow. John barely survived and Xanshi was lost. Geoff Thorne uses John Stewarts biggest failure as a call back to the past and what could have been. This is some A1 storytelling right here, man. Geoff puts a different light on the loss of Krypton and Xanshi in the grand scheme of things in terms of the universe.

However, the future is still bright as fuck as we see Heroes and the GL Corps will serve the roles that the New Gods do. Plus, there’s more to do out in the universe. The Guardians are now focused on the Dark Sectors. The sectors of the universe so dark that the Guardian’s view is obscured. Plus, the universe got a whole lot bigger. That’s more planets and folks that need protection way out there. Who better to lead these thousands of newly assigned Green Lanterns on a quest into unknown sectors of space than the best green lantern to ever do it, John Stewart. Leader of the Green Lantern Corps. (Listen, If Hal’s the greatest GL then, in my eyes, that makes John the best GL).

Geoff Throne changed the whole status quo of the Green Lantern Corps on two fronts. The squad done been rolled back, reformed, reassigned, and it’s all for the better. Plus, we got quests going on to chart new territories. Listen, this is the Emerald Crusader shit I been talking about. This is the change I wanted to see, I just never imagined it would come with actual references to police abolitionism and reform. Maybe that’s just what happens when you got a Black and Brown creative team behind the pen and brush (shout out to artist Dexter Soy). I am really surprised that the moves made in this series aren’t causing more waves. We lost our minds in the Black Nerd Problems slack when this issue dropped. I’m still shocked to have seen this go down. It’s truly amazing to me as a long-time fan because we know how art imitates life. This comic book issue is an instance where real-life needs to imitate art.

We see John Stewart has been portrayed as more marine than counselor a lot of times since the military sniper retcon to his background. However, John is still the most level-headed member of the Green Lantern Corps. Hence why he is their leader. It’s dope to see him get to be an adventurer/ ambassador of goodwill into the unknown. A really dope thing I don’t want to overlook is his conversation with Teen Lantern Keli Quintela. An eleven-year-old brown Latinx girl that hacked into the Green Lantern Central Power Battery. Keli wants to be a Green Lantern, going so far as to consider herself one and we see John Stewart explain what it means to be a Green Lantern. That it’s not about the fights and adventures. It’s about being a public servant of the people as well as protecting them. John lets Keli know there’s a difference between being a brave hero and being a Green Lantern.

That right there is what it’s about. This is what separates Green Lanterns from the police. Copaganda wishes it could get it like the Green Lantern Corps are getting it right now. Actually, no they don’t because they don’t wanna be the change needed in their communities. Them Green Lanterns tho? They for the people. Seeing John Stewart talk to a kid that wants to be part of the same institution that he is, comes across as sincere instead of forced. In one issue, we see the Guardians of the Universe be the change that was needed of them. The Green Lanterns, though shocked and confused at the news, fall the fuck in line because why? It’s the right thing to as deemed by the worlds they’re protecting.

Geoff Thorne shows us what it looks like to take the policing out of a community and be reformed into an alternative. I never imagined that I’d get to see it in one of my favorite comic books, but it’s fitting since Green Lanterns’ whole thing is being able to create things we couldn’t even imagine or fathom seeing.