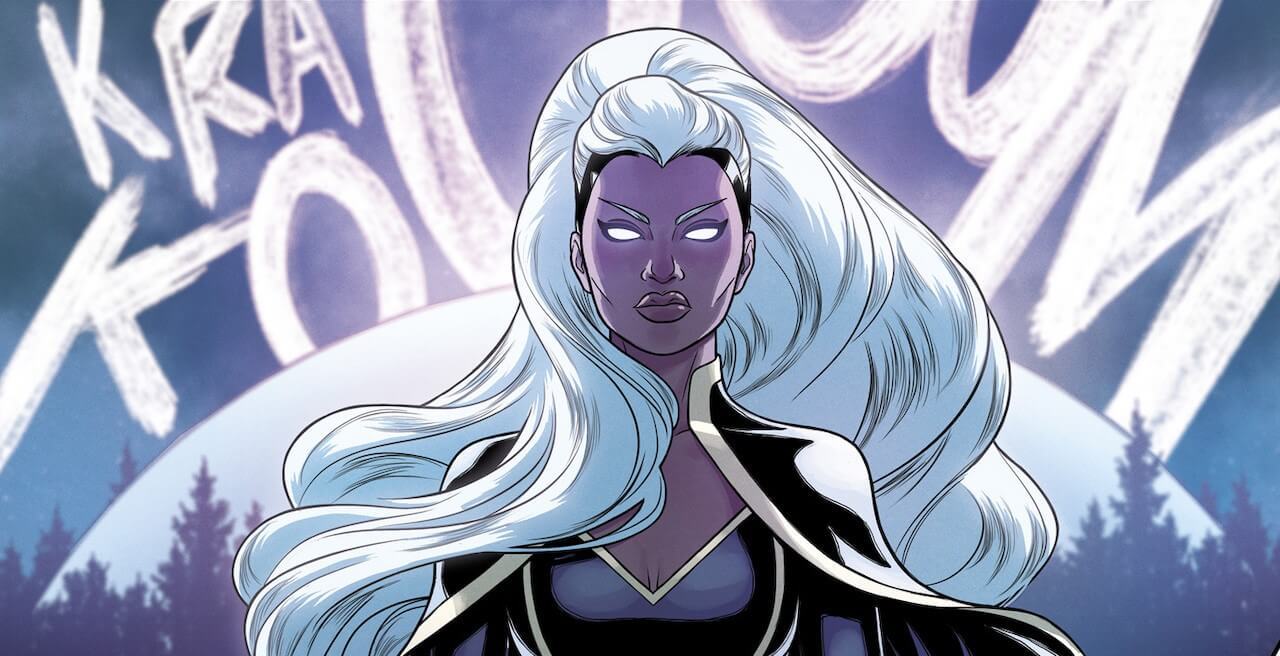 The Reign of X has Been Kind to Storm, and Storm Specifically

As I traverse through every interconnected issue of Jonathan Hickman’s “Reign of X,” I see flashes of brilliance from time to time like Zenitsu’s epic moments. Looking back, I can’t help but notice that Storm has been shining brighter than a greased up forehead before an after school fight! I can’t believe the audacity of these writers! They’re giving us pure, unadulterated glory of Storm BARZ, and I will not go another day until props are doled out to the artists and comic books doin the Lawds work on Ororo’s behalf!

The prelude to X of Swords flexed the ferocity of Storm and her place as one of the X-Men’s most resourceful heroes by breaking into Wakanda’s insanely secure vault to steal Skybreaker, the ancient Wakandan weapon that was necessary to enter the battle. Later, she shocked the Arakki allied front when she put the Horseman of Death 6 feet under after a 1v1 where she used nary a single one of her powers.

Why not just surrender to the inevitable–wash my hands of it–and start anew?
After all, what’s one’s life when you have an endless number of them?
Where’s the value?

Before the X of Swords storyline popped off, Storm was under attack from a machine virus, thanks to the Children of the Vault. Storm was a highly anticipated participant in the X of Swords battle between the mutants of Krakoa and those from Otherworld, so there had to be resolution to this off techno infection. Giant Size X-Men: Storm was the vehicle that would right the ship, but little did we know, it would be a master class on the true value of life in an era of do-overs and resurrections.

After Emma Frost and Jean Grey (incredible issue of Giant Size X-Men: EF and JG btw) go deep into Ororo’s mind and identify the problem, it’s up to this rag tag group of X-Men and traitors to enter The World and rid the African Goddess of her ailment. Despite being riddled with this virus that will soon claim her life, look at Storm leading the charge! Without a arm she spit! Without a arm she spit!!

While the journey through The World to Storm’s hyperbolic healing chamber (if you will) was relatively easy for the squad, the existential crisis Storm battles internally is no walk in the park. “Why struggle? Why fight?” when you’re guaranteed another life? Why not hit the reset button if there are countless lives in this era of mutant supremacy? Because “Life…It’s fighting for who you are…,” and Storm is a mutant who wanted to live, not accept this impending death. Jonathan Hickman and Russell Dauterman brought this internal battle to life beautifully, showcasing the unwavering will of Storm in the process.

In the latest issue of Marauders, the whole gang sits around a table on the eve of the incredibly hyped Hellfire Gala. Storm speaks plainly to her team of Pyro, Kate Pryde, Iceman, Emma Frost, Bishop, and fellow guests. First off, to have the entire issue start off with Storm stuntin on her team like Big Pun telling that guy to go that way?!

Just brilliant. The rest of this issue is a nonstop Storm appreciation tour. Every mutant shares a genuinely touching or badass Storm moment from their time as Marauders, all while guessing how many knives Storm has hidden on her.

Pyro passes his marker to Storm after losing a bet and thinks back on the villainous glory days when he rolled around with some ruthless mufuckin mutants, before recounting the time Storm was able to resolve a problem in India without setting anyone on fire or dropping an avalanche on them. A single knife, that didn’t even draw blood, was all it took to liberate a mutant slave. The story is great, but the bar Storm drops in response to the oppressor’s argument is phenomenal. “She does the work of a dozen men,” he says and Storm acutely responds, “Most of us do,” then dismisses him mercifully.

Bishop remembers a time that Storm helped him out of a jam in Angola, even though Storm had never been there with Bishop before. That wasn’t what the Angolans thought once a deafening sound of thunder and lightning cracked above their negotiation location. Ice Man’s story involved hands, hands, and more hands…and some broken bones, reminding everyone of her superior fighting skills. A hushed sentence was all it took to convince Hate Monger to hang up the hood of hatred.

Callisto and Emma both tells half stories, alluding to the significance Storm has had on both their lives, whether they deserved her uplifting hand or not. Kate falls back on her favorite Storm memories, ones where she is crying. Little Miss Pryde went through some heavy periods of doubt about her status as a mutant, but all it took was one beautiful Storm response to put it all into perspective “Well, that would be an ironic twist considering how much mutant pride you’ve exuded for years.” This is a callback to the very first panel of Marauders #1 where Kate broke her nose trying to pass through a gate to Krakoa. The writing is consistently top notch 20 issues later.

Jonathan Hickman and Brett Booth must’ve been watching Back To the Future the night they planned this book because X-Men #17 oozes 90s Jim Lee artistry and it’s was so dam refreshing to read! Since the end of X of Swords, the X-Men haven’t really had much time to chill. Not only are they still dealing with Hominus Verendi, The Children of the Vault, Coven Akabba, Dracula’s vampire army, and plenty of other lesser threats, but they’re also getting distress calls from the homies in the Shi’ar Empire. Luckily, a kidnapped young Empress Xandra, (you know, the daughter of Lilandra and Professor X), is instant smoke to 3 of the baddest mutants to ever call themselves gifted youngsters, Cyclops, Marvel Girl, and Storm. On sight, Jean knows who kidnapped Xandra, leaving Cyclops and Storm to handle the light work.

But a Marvel Vs. Capcom hyper combo finishing move from the greatest X-Men leaders isn’t enough to complete the Storm appreciation tour, is it? Of course not! Ya see, the real perpetrator of this Xandra plot wasn’t some squirrely little Stygian screaming hate filled obscenities and getting blasted into oblivion, it was Urr wielding the great maul of Stygia. After taking out Cyclops with a swift maul blow, Storm is the last person standing between Urr and the end of the royal Neramani bloodline.

The end of this situation is the perfect depiction of Storm’s approach to handling conflict. Ever the diplomat, she offers her opponent the chance to stand down without further bloodshed or violence. She goes about her conversation with respect and dignity, despite the horrors that villain may be responsible for. And when they inevitably refuse her offer and continue down their vile path of murder and wrongdoing, their wicked actions are met with the might of the elements. In the end, “Storm of Krakoa, vanquisher of a rebellion and friend of the throne…” can call in a favor with the empire whenever needed, and that is one hell of a trump card on top of being an Omega level mutant.

Thank You to Storm, and Storm Specifically

While every comic book reader respects Storm and most expected dope things for her when it was announced that Hickman would be ushering in the “Dawn” and then “Reign of X,” but it’s still nice to know her light wont be diminished because of the grand scale of this X-Men story.

As Bast is my witness, Storm is one of the most beloved characters in Marvel history. Her powers, origin, and honor make her an easy fan favorite, but it’s her cunning, leadership and execution that make long-time fans revel at her greatness. Huge shout outs to Jonathan Hickman, Gerry Duggan, Stefano Caselli, Russell Dauterman, and the slew of other artists who have been blessing the cosmos with great writing and artwork for our Goddess. And this is only the beginning of what Hickman and company have in store for the next chapter of Storm’s illustrious story.