[quote_simple]Nothing is so painful to the human mind as a great and sudden change.[/quote_simple]

Wu is finally seeking medical care — not for the weird Woging disease he’s contracted, but for the concussion he got during a weird Woging disease blackout. [says silent prayer that everyone in Portland starts making better choices.] Nick and Hank visit a pretty groggy Wu in the hospital. He doesn’t remember much from the night the Barbatus Ossifrage in “Good to the Bone” ignored the bait (Monroe) and went after him instead. They remind him that he hit his head pretty hard, but beyond that they’re still baffled. And he STILL doesn’t tell him that he’s randomly woging because… I don’t… because he has intimacy issues, I guess. They leave Wu in the hospital and as they do, the camera pans to a shady character lurking in the waiting room. Hmmmm. Noted. Shady waits until Nick and Hank are gone to peak in on Wu. As soon as he sees him, he calls someone to tell them that they “Got him.” Wu is having a bad couple weeks.

Meisner is at an undisclosed location. This has to be the safe house where Asset #3 (A.K.A. Diana Renard Schade) was kept. Safe being a generous word as the first thing Meisner sees upon entering is the dead body of an HW operative. And then another.

He doesn’t let the dead and decomposing body of his coworkers slow him down, though. He continues searching the house. We get a chance to see Diana’s room. It’s pretty traditionally gendered: pink and purple and poorly drawn pictures of horses. Two things catch his attention: a Brother’s Grimm book on her bed and a Black Claw™ logo on her wall. Welp, there’s confirmation if the dead friends weren’t enough.

Then he hears a noise and immediately turns off his flashlight. I see you, Meisner, doing badass shit. Of course that noise came from the Hundjäger who came there specifically to kill him because, really, what else could have made that noise?

One of my top 5 favorite moments of episode was Meisner’s clothing during this fight. First, dude took of his coat before fighting and then mid-fight his shirt gets ripped off. [Dear writers, if you’re reading this, can the season 6 finale end with an ab off between Meisner and Renard? Just flexing in front of mirrors until one of them breaks.] Anyway, as Meisner’s wardrobe malfunction, Trubel swoops in and saves him. But not before killing the other two Black Claw operatives outside.

As Meisner looks at a picture of Diana, Adalind is hugging her daughter for the first time since they were separated. It’s emotional all around. And my emotional, I mean all of the emotions: joy, sadness, anger, unbridled rage.

So, about Diana and her glowing purple eyes and saccharine sweet voice, um… run Adalind, run. Diana wants Adalind to come with them (her, Renard, Black Claw). When Adalind says she can’t yet, Diana starts moving shit with her mind. By shit, I mean huge sheets of sharp metal. By moving, I mean flying across the room and almost decapitating people. At casa de evil, Renard tucks child of the corn in and heads downstairs to do whatever traitors do to relax. Instead, he meets Conrad Bonaparte who wants to encourage Adalind to make the “right” decision – or he’ll kill her. And since the “right” decision is her leaving Nick to be with Renard so they can nuclear family it up with their hellspawn, Bonaparte assures Renard that their is a place for the Grimm in the Black Claw world order. A huge part of the need for Adalind to get on Team Black Claw is that Diana is really powerful – too powerful. So powerful in fact that she appears as a waking vision to Adalind at the fome just to wake her up and guilt her. Adalind accidentally wakes up Kelly whose was asleep in Nick’s arms.

Maybe something about seeing Diana and her powers shook Adalind, but regardless of why she finally FINALLY finally came clean to Nick about her recent hexenbiesting. She looked scared like he might break up with her and then decapitate her. But, of course,he doesn’t.

In other closet woging news, Wu who is still at the hospital and asleep starts woging in his sleep. That poor floor nurse. She starts screaming and runs out for help, but by the time she gets back, he’s back to normal.

In other anti-climactic news, Hank is waking up in bed with Zuri. If my post-coital bliss was all “let’s talk about your partner,” I might be wary. [Repeats silent prayer that everyone in Portland starts making better choices].

Once Hank gets his clothes on, he and Nick pick up Wu from the hospital. He has some unexplained antibodies in his blood, but nothing worth keeping him in longer in the hospital for. The guys take him home and he starts to tell him about these weird primal dreams he’s been having, but falls short of telling them about the woging. Nick suggests that Rosalee might have something to help him sleep. In the meantime, they force him to take a day off.

Adalind is at home, working, when she hears Diana’s voice calling her. Her evil little face appears outside of the window (on the second floor) asking over and over again for Adalind to come home. But, funny thing about stealing someone’s body, sometimes you get linked in odd ways: Eve, at HW, can hear and see all of this. BUT, since Diana is ridiculously powerful, she can see Eve, too, and breaks her mirror into a delightfully artsy skull motif.

As she’s recovering from the shock – and what seems like pain – Meisner and Trubel come back. Eve fills them in on Diana: she’s in town and she wants Adalind. She also warns them about the depth of Diana’s powers.

At Wu’s place, he’s doing his day off thing: watching bad tv and making a sandwich. He looks out the window and sees a truck. Could that be Shady from the hospital waiting room? Methinks so. But before Wu can get upset about that, he accidentally cuts himself and his hand woges. Just his hand. He breathes through it – think Ed Norton trying not to hulk out in the movie everyone tries to pretend didn’t happen. Afterwards, he calls Rosalee FINALLY. He’s going to come right over to talk it over with her. Trubel calls Nick and uses her super serious voice to say he needs to come to HW right now.

As he and Nick are in transit, Conrad Bonaparte is showing up unannounced (but escorted by her boss) to Adalind’s office. Dude wastes no time getting to the I-threaten-your-baby-to-get-your-attention part of his “leave the Grimm and come with us” speech. And he gives her a deadline: the end of the day.

Wu leaves his place en route to the Spice Shop and Shady’s truck is still there so he decides to confront him. Turns out Shady is a guy he’s arrested three times. Shady woges Skalengeck-style and then… welp.

When Hank and Nick arrive at HW, Meisner, Eve, and Trubel get to the point pretty quick. Adalind is a hexenbiest, and a mom, and that combination makes her weak when it comes to Black Claw especially since they have her daughter. Nick is pretty sure Adalind wouldn’t leave Kelly, but Eve points out the obvious: she might take him.

They are in mid-”Sorry Nick, you’re love life is vast wasteland of disappointment and hexenbiests” when Hanks gets a call about a body.

There’s a body with its throat ripped out. Hmmm. Seems oddly like the same neighborhood where Wu confronted that Skalengeck. Hmmm. Then Rosalee calls Nick because Wu never shows up to the Spice Shop. Hmmm.

Hank and Nick go to Wu’s apartment where there is a bloody handprint on the door and a blood-covered Wu on the bed. Welp. RIP Skalengeck. Wu starts to remember vaguely what happened before he blacked out. The last thing he remembered was him woging. So if your friend says, “Well, do you think you killed him?” things have gone terribly wrong in your life so when Nick says that to Wu…

Wu goes with them back to the crime scene to identify the body he mutilated. After washing the blood off of his. Entire. Body. After, they go to his truck. They find a paper with Wu’s address on it so they send it to Trubel to check against the HW databases. It’s clearly past time to get Wu to the Spice Shop, so they head over. But as they do, Hank gets a call from Zuri asking if she’ll see him later. As this heifer is making plans, Conrad Bonaparte steps into view behind her. Damn, whose house is he NOT going to visit this week? So it’s official.

Adalind is at the fome crying and talking to Kelly about the rock and a hexenbiest that she’s stuck between. She doesn’t want to leave Nick, but… Diana. Her daughter who she lost before. Her phone rings and it’s Renard saying “We need an answer now.” EXCEPT it’s not! It’s Doana, eyes aglow, staring out her window impersonating Renard and using up his cell minutes without ever touching a phone. What?!

When Wu gets to the Spice Shop, he (finally) starts to tell everyone about the dreams. Since he can’t remember anything, they give him a potion called “Remember the Darkness.” It’s supposed to knock him out and make him talk in his sleep. He starts recounting everything that happened with Shady AKA Theo Delano. Then Wu woges. And Monroe, like any WorldStar fan, starts recording it. 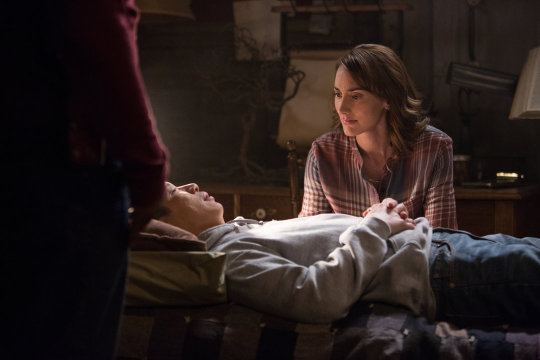 Rosalee makes the lycanthropia/viral infection connection. After he wakes up freaked up because he remember killing a man with his bare hands, they show him the video. She guesses that it’s a fight-or-flight reaction – stress induced. Trubel calls to tell them that Theo “Shady” Delano joined Black Claw 6 months ago. Eve yanks the phone out Trubel’s hand like somebody’s mom who caught them on the phone with that one friend she told not to call the house to tell Nick that something was going on with Adalind so he should go home now. Everyone is freaked out; Hank says out loud what we were all thinking, “We all need to start watching our backs,” then he goes to Zuri’s house. Welp.

Nick goes home and is met with a Dear Grimm letter.  It explains vaguely why she’s doing what she’s doing, but in true hexenbiest fashion the letters disappear to reveal a hidden message: I have to protect you.

So many questions: Is Renard really on Team Black Claw or is he on Team Don;t Kill my (Evil) Daughter? How long before Hank figures out Zuri is using him? Who has better abs Renard or Meisner? Is Eve becoming Juliette (but better) again? Can someone either pour a tablespoon of Nick’s blood down Diana’s throat or call Supernanny?

Are you following Black Nerd Problems on Twitter,Facebook,Tumblr or Google+?