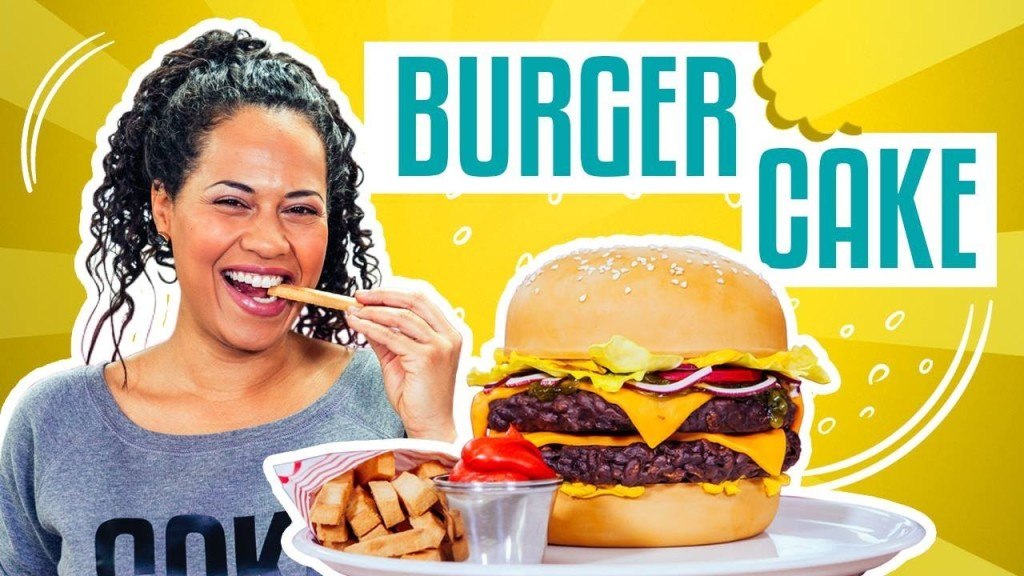 Let me tell you something… ya man ain’t never seen a cake like this unless he’s like me and spends his time going down the rabbit holes of YouTube in the midnight hours watching cake videos. If that’s ya mans, tell him I said wassup. Ain’t nothing wrong with a little crumb coat and chill. If you haven’t guessed it, one of my many (probably, too many) guilty pleasures is watching cake videos. But not just any cake videos, I’m talking about the crazy big, looks like something you shouldn’t eat, giant sized cake version of something you already eat type cake videos.

I love to bake. Baking cakes is something that has always intrigued me. One night, a couple of years ago, I was minding my magical Black business and searching for new recipes. That’s when I was lead to the Canadian bombshell and queen of cakes, Yolanda Gampp and her YouTube channel How to Cake It. Queen of cakes may not be a grand enough title. I feel like I need to run down her resume like Missandei read off Daenerys’ so you know it’s real.

“Yolanda Gampp, rightful Queen of cakes, sculptor of confections, the Khaleesi of mega cakes, cake tee curator, she got 99 problems but a cake ain’t one.”

Baking is a freaking art form. Anyone who bakes knows that. You have to be part scientist and part visual artist for that shit to turn out right. Yolanda is all that, plus an architect and just straight up goofy as hell. This woman makes some visually stunning cakes with a plethora of tools and contraptions. She’s got rulers, protractors, butter cream, fondant, and her handy sidekick Sir Squeeze A Lot. Sir Squeeze just so happens to be a squeeze bottle who is brimming with a house made simple syrup that her cakes are soaked in prior to becoming architecturally sound structures of yumminess.

HERE IT IS ? NEW VIDEO TUESDAY ? This week, I turned a classic pineapple ?UPSIDE DOWN ? (literally) and made it extra cute! ? What do you guys think I should name my new friend? (Don’t tell Walter though ?, I’m not sure if he’s ready for the news ?) Check it out NOW ?link in bio ? – – – – #HTCI #HowToCakeIt #Cakespiration #YolandaGampp #BakingLove #Desserts #Cake #CakeDecorating #CakeDesign #Food #Baking #VanillaCake #YolandaGampp #Summer #Toronto #NewVideo #YouTube #Pineapple #UpsideDown #Flip #Fruit #Picnic

Yolanda’s got mad baking skills. Prior to becoming some of the most aesthetically beautiful confections I’ve ever seen, the cakes themselves just look good. Yo (as she affectionately calls herself) also makes some bomb ass cheesecakes, pecan pies, cookies, sauces and a chocolate ganache that I am sure would make me slap somebody’s mama. There have been occasions where the entire cake concept includes many of these things.

I’m always mouth gaping at these towers and wondering who in the hell would actually eat them. I quickly shut my pie hole at the realization that I might actually eat that. If Yolanda Gampp is serving me cake, I’mma eat cake… and pie and cookies and whatever the hell else she puts it front of me, because she is queen cake-dammit. I also mentioned that she’s goofy as hell, right? Sometimes she’s freaking hilarious. As talented as she is, I love that she never takes herself too seriously. Her staff doesn’t either. Every episode she’s wearing a new cake tee that she also happens to sell on her website. Her voice overs are stupid funny and filled with hip hop and pop culture references. She’s usually sitting in a chair in front of a hot pink wall with a mantel full of framed cake-spirations and quotes that she and her team have probably come up with.

I cannot begin to explain to you the number of hours I’ve spent watching her videos, turning my head to see her precise ruler skills on fondant and laughing at her corny jokes. My YouTube queue is full of her recipes for buttercream, ganache, and marshmallow fondant. I got baking pans rattling in my cabinets every time they hear her show start up on my t.v. I’ve subscribed to her YouTube channel. I’ve subscribed to her newsletter on her website and have been caught waiting by the phone Monday nights to get that early release of the new video that will drop to mere mortals on Tuesdays. You heard me. If you ain’t a subscriber, you ain’t a real one.

One of the best things about How To Cake It is watching Yo tear into those cakes at the end. When I say tear into, I really mean ‘methodically slice’ and eat. As careful as she is about the details that go into her cakes, she is as equally careful about her slicing game. Even when the cake looks like the foot of a man or a real ass heart, she’s carefully cutting and devouring that thing. Hey, with 3.2M followers since 2015, she’s doing something right!

What I’m really trying to say is… join me in my passion for cakesploitation. Follow me down the rabbit hole of BB-8 shaped 3-D cakes, caramel, and buttercream dreams. How To Cake It has what you need, baby. You won’t regret it. I promise.